As suburban Costco co-workers, Ben Stiller, Jonah Hill, Vince Vaughn, and Richard Ayoade make an unlikely crime-fighting team in the upcoming comedy The Watch. The red band trailer for the flick, previously known as Neighborhood Watch, has the foursome fighting an intruder not usually found in cul-de-sacs: aliens. At first, the pals just seem paranoid, eying customers as possible outlanders, but then their fears become validated as they stumble upon an otherworldly object whilst on their neighborhood watch shift. 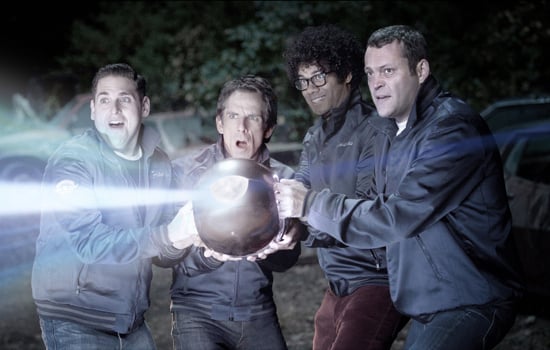 Between the bodily fluid talk and the abundance of swear words, this trailer is definitely NSFW. While I'm not against the former, I feel like too much time is dedicated to showing how these brotastic guys interact while not enough of the storyline is explained. The scenes we do see are funny, but it seems like this trailer is only for the first half of the film, and we still have no idea what the alien situation is. Given that the film was written by Superbad scribes Seth Rogen and Evan Goldberg and directed by The Lonely Island's Akiva Schaffer, I'm sure we can expect more crude humor and blown-up bovines, but I'm curious to find out about the crux of the film and who the foreign invaders are. The movie doesn't come out until July 27, but you can check out the trailer after the jump.

Entertainment News
Johnny Depp to Direct "Modigliani" Biopic, His First Return Behind the Camera in 25 Years
by Njera Perkins 14 hours ago