As expected, Michael Jackson held a press conference in London yesterday to announce he will play a series of concerts at the O2 Arena this summer. Michael told fans the ten shows from 8 July would be his "final curtain call" in London, with ticket prices at £75, £65 and £50. The King of Pop's fans have understandably reacted in a big way to the news, with his website receiving 16,000 visits a second as people register for the pre-sale draw. His promoter has also revealed further plans, saying Michael could earn $400 million from a comeback deal that could include new music, a world tour and a 3D film based on Thriller. With a memorabilia law suit on his hands as he sues an auction house, Michael's certainly going to be busy. 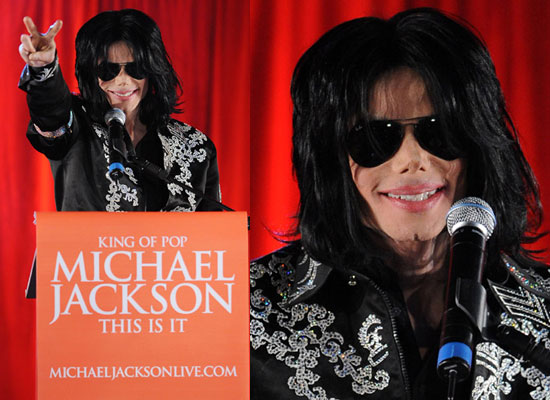 To watch the live telecast of Michael making his announcement, and see more pictures of MJ plus the lovely Dermot O'Leary, who hosted the announcement, just read more.