For a second year in a row, Robert Pattinson and Kristen Stewart won best kiss at the MTV Movie Awards after their lip locking in New Moon received the most votes. Last year they just pretended, but last night it seemed like Robert did sneak a real kiss in after they joked around. Opinion is divided over whether it was planned or whether Kristen was annoyed that she was caught off guard. Check out video footage after the jump and vote to let PopUS know what you think! The duo also won their own individual awards, Rob taking Global Superstar and Best Male Performance, and Kristen winning Best Female Performance. They introduced a new scene from Eclipse with Taylor Lautner, and joined the rest of the cast for the film's Best Movie gong. Stay tuned for loads more pictures and the full list of winners! 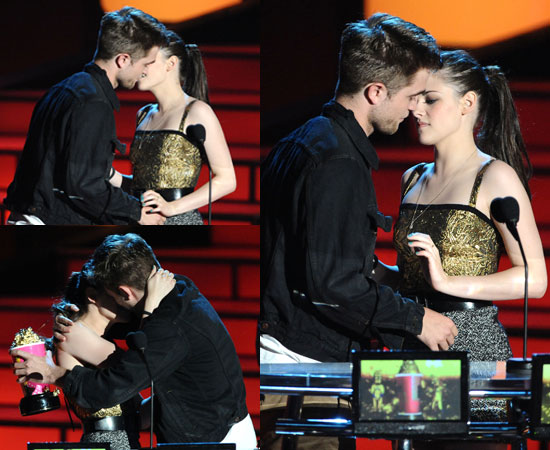 To watch footage of the kiss and to see pics of Rob and Kristen, just read more.