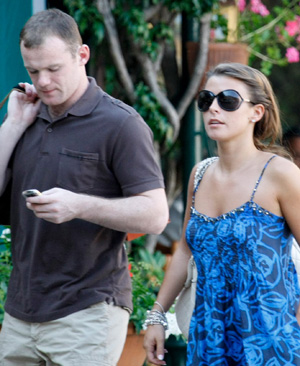 Wayne Rooney married his childhood sweetheart Coleen McLoughlin today in a ceremony at the Villa Durazzo on the Italian Riviera.

Most details are being kept under wraps as the 22 year olds have an exclusive magazine deal, but the Mayor of Portafino has confirmed that they were wed this morning. Lovely Coleen's a bona fide footballer's wife now!

Wayne and Coleen were spotted earlier this week at the town hall where they declared their intention to wed, as is required by Italian law.

I'm so happy for them – they've been together for six years, having met when they were twelve and beginning to date at sixteen. Big congrats to the happy couple!

All important clothing update: Reports are emerging that Coleen wore a strapless white dress and pearls and Wayne wore a hazel coloured suit with an open necked shirt.