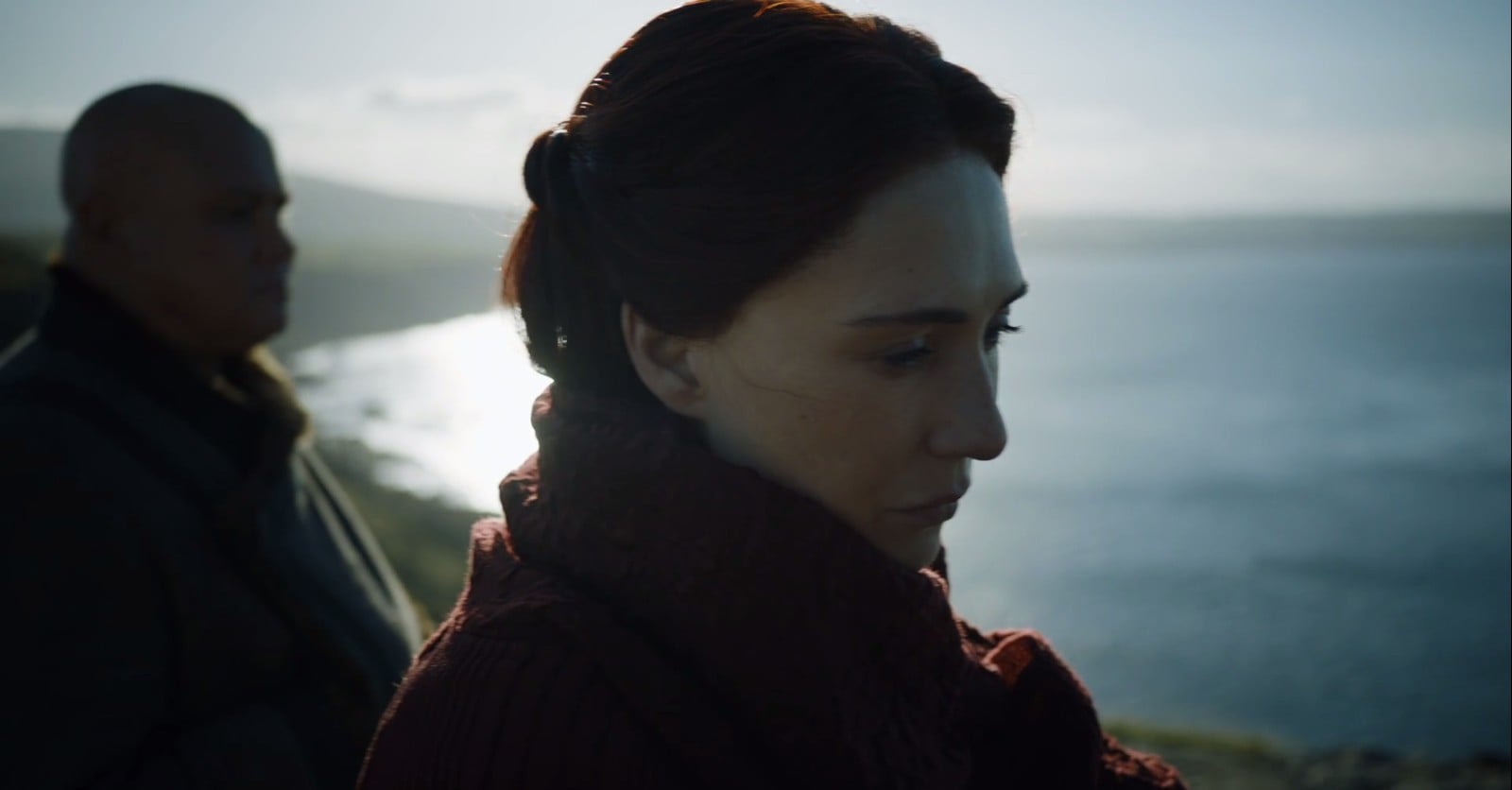 Poor Varys is officially on the receiving end of one of Melisandre's prophecies, and that has to be one of the worst places to be. In the latest episode of Game of Thrones, the Red Woman reveals she's heading to Volantis but will return because she, like Varys, has to die in Westeros.

Now, it's not surprising that Melisandre's story is set to end in the Seven Kingdoms. In season three, she promises Arya they will meet again, and she's also on the Stark girl's list. It stands to reason that Arya will be the one to end Melisandre's life.

But why does poor Varys have to be dragged into this mess? Up until this point, Varys has been untouchable, but his luck may have finally run out. Given her penchant for staring into the flames, Melisandre could have seen Varys's end reflected back at her. However, there have been no previous hints about the Spider's impending demise.

In the books, Varys is alive and well and busy manipulating the major players to get his chosen monarch on the Iron Throne. He's one of the rare characters who has been able to escape the prophecy game. He deals in political machinations and stays far away from magic.

What's worrying is that Varys's death may not be the only one coming. Melisandre boasts about introducing ice to fire, but if Varys is doomed, how many more of Daenerys's allies will fall? The Dragon Queen is currently losing her war against Cersei, and those who stand with her are paying a steep price. Melisandre is such an enigmatic character; it's impossible to know where her loyalties truly lie. She only says Daenerys has a role to play in her visions, not that she's the prince or princess who is promised.

"While Varys has never shown any interest in dying to achieve his goal, Melisandre seems to be at peace with her fate."

Both Melisandre and Varys come from lands beyond the Seven Kingdoms. Although he hates magic, he has more in common with the Red Woman than he would like to admit. They've both done things in the name of their causes that they surely regret. But they're also deeply invested in seeing the right person rule. For Varys, that means putting Daenerys on the Throne because she cares about the well-being of the people, and for Melisandre, it means fending off the long night to come by throwing her weight behind Jon. Ultimately, they're both cogs in a much larger machine. While Varys has never shown any interest in dying to achieve his goal, Melisandre seems to be at peace with her fate. She's so at peace she's already planning to return to Westeros, even though she knows death will find her there.

Since her meeting with Arya, Melisandre has been living on borrowed time. There's no guarantee that Jon Snow's little sister will be the one who kills the Red Woman, but the promise that they would meet again needs to be fulfilled before her death can come to pass. Melisandre's life has been a long one, and everything she's done has been in service of the Lord of Light. Her god is likely what will draw her back to the Seven Kingdoms and lead her to die far from her birthplace. Remember: Volantis is home to the Red Temple, where the show's other High Priestess, Kinvara, serves. Melisandre may be rallying the followers of R'hllor to return with her to Westeros to serve Daenerys or Jon (or the both of them, if they form an alliance). Her final contribution to the battle to come may be an army of priests and priestesses who can use magic to fight the White Walkers.

At the same time, there are hints that Melisandre has another agenda, as well. Her suggestion to Varys that his death is imminent could upset the balance of Daenerys's court in an unexpected way. The Spider is nothing if not a survivor, and if he believes that standing with Daenerys will lead to his death, he could switch teams. Of course, that would be a mistake, because the Dragon Queen swears to kill him if he ever betrays her. Melisandre's prophecy may push Varys to cross his queen and ensure his role in the great game comes to an end. It would be a devious move on Melisandre's part, but she's nothing if not adept at convincing people to bend to her will without their knowledge. There's no guarantee her words were an actual prophecy at all. She knows Varys despises her, and there's no better way to get rid of him than by planting a seed of doubt in his mind about his own safety if he stays with Daenerys.

Death has been coming for Melisandre for some time now, and that makes her dangerous. The only thing she's truly beholden to is her god. If she believes removing Varys from the equation will in some way pave the way for Jon and Daenerys to get down to the business of fulfilling the show's ultimate prophecy, she's going to make sure it happens. For now, she's planted a seed of doubt in Varys's mind and created a scenario in which the Spider could become caught in his own web.