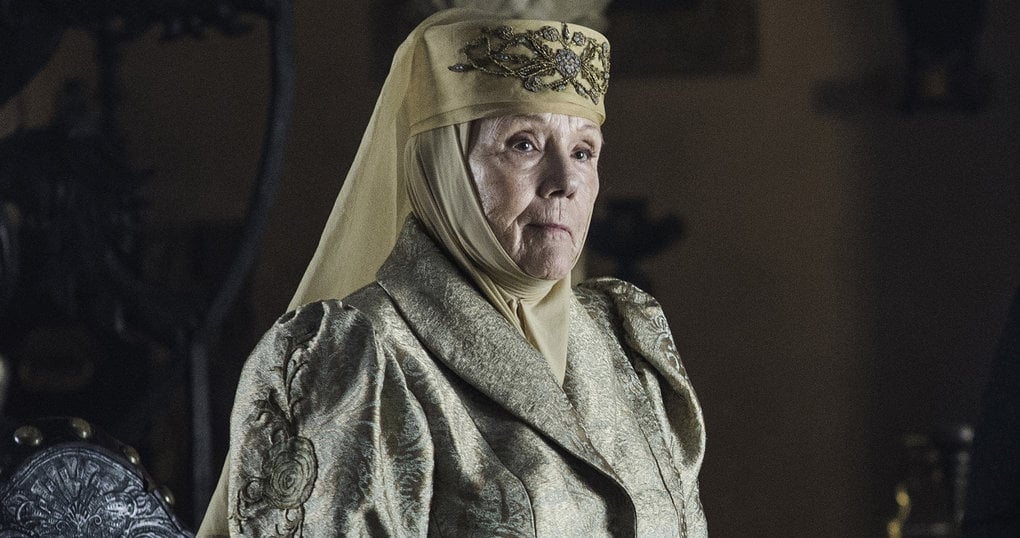 At the end of the latest episode of Game of Thrones, titled "The Queen's Justice," Lady Olenna Tyrell serves up a rather glorious mic drop when staring down imminent death at the hands, er, hand of Jaime Lannister.

After being assured her death will be painless, Lady Olenna downs her poisoned wine in one gulp and then says to Jaime, "I'd hate to die like your son: clawing at my neck, foam and bile spilling from my mouth, eyes blood-red, skin purple. Must have been horrible for you, as a King's Guard and a father. It was horrible enough for me. A shocking scene, not at all what I intended. You see, I'd never seen the poison work before. Tell Cersei, I want her to know it was me."

Related:
Lady Olenna's Advice For Daenerys Echoes a Cersei Quote — Did You Catch It?

At this news, a stricken Jaime strides out of the room as Lady Olenna presumably succumbs shortly thereafter to the poison. But what is that epic speech all about?

Back in season four, Lady Olenna's granddaughter Margaery is betrothed to King Joffrey. The marriage will form a good alliance between the two houses but also means Margaery is forever tied to a psychotic monster. So Olenna conspires with Petyr Baelish (aka Littlefinger, who is now Sansa Stark's right-hand man) to kill Joffrey. They stage the death at the wedding, poisoning Joffrey's cup with a jewel from Sansa's necklace. As Joffrey chokes, vomits, and dies right there at the banquet . . .

. . . Petyr has Sansa spirited away to a ship and Cersei blames the absent Stark and her husband, Joffrey's uncle, Tyrion, for the death. But neither Tyrion nor Sansa have anything to do with it. It's Lady Olenna all along, which she reveals to Jaime in what is perhaps the best predeath speech Game of Thrones has ever seen.

Lady Olenna FTW. We will miss you terribly, Tyrell matriarch (and actress Diana Rigg). You fought well, and now your watch is ended.

The Lannisters (and Samwell Tarly's father, Lord Tarly) now control Highgarden and all its riches. After taking out what had remained of the Martells from Dorne and the Greyjoy fleet in season seven's second episode, this is another blow to Daenerys's bid for the Iron Throne. Maybe aligning with Jon Snow isn't looking too shabby anymore.