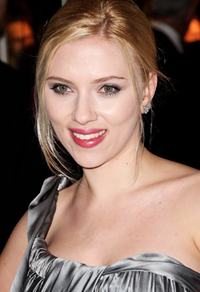 As you probably know, Scarlett Johansson is releasing an album of Tom Waits covers - Anywhere I Lay My Head. You may not know that David Bowie is contributing backing vocals to it on songs "Falling Down" and "Fannin Street", which I think adds kudos to the record. He said of the album,

"All I contribute are these oo's and ah's on a couple of tracks... (I) laid down my humble parts in an hour or so, double and sometimes quadruple-tracking them.... The songs are great, really good Tom Waits stuff, and Scarlett's performances are mystical and twice cool. She creates a mood that could have been summoned by someone like Margery Latimer or Jeanette Winterson."

Praise indeed. But what do you think about actors and actresses releasing albums? Are you curious to hear their tunes? Lindsay Lohan, Vanessa Hudgens, Hilary Duff, and now Scarlett? Hmmm. Well, remember Kylie started on Neighbours!