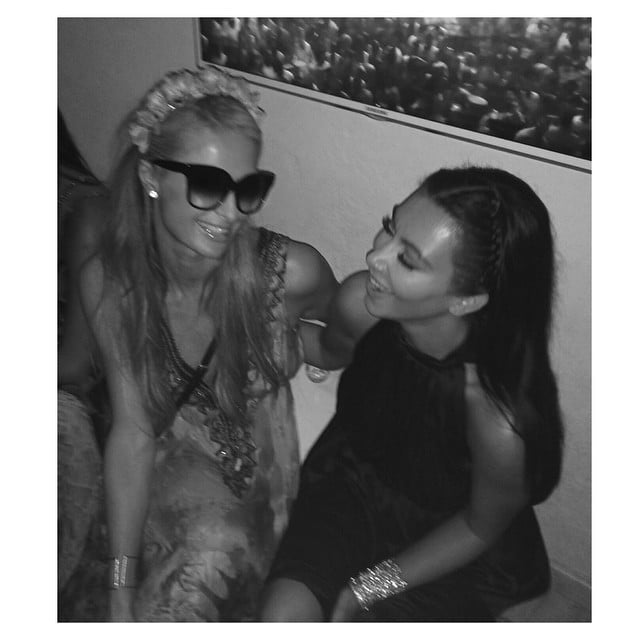 Kim Kardashian and Paris Hilton want the world to know there's no bad blood between them. On Saturday, Kim shared an Instagram showing the two stars smiling and laughing together in Ibiza, Spain. "Reminiscing about the 1st time we went to Ibiza in 2006! @parishilton it was so good to see you & catch up!! Loves it lol." Paris regrammed the picture on Sunday, writing, "So much fun with @KimKardashian this weekend at @AmnesiaIbiza. The first time we ever came to this magical island was together. Such an amazing trip! Great catching up with you too beautiful!" The image was taken during Kim's whirlwind getaway in Spain, during which she and her family partied with Justin Bieber at designer Riccardo Tisci's blowout birthday party.

The feud between the reality-stars-turned-moguls has been a topic of speculation over the years. At the height of Paris's fame in the 2000s, the two seemed inseparable, popping up at events together and sharing scenes on Paris's E! reality show, The Simple Life, when Kim worked for Paris as her closet organiser. Talk about a falling-out gained momentum in 2007 as the frequency of their appearances together dwindled. The following year, Paris made negative comments about Kim's physique, and in 2011, Paris ended an interview in which she was asked, "Do you feel as if people like Kim Kardashian are overshadowing you?" A reunion seemed slightly more likely after Kim's sisters Kendall and Kylie Jenner hung out with Paris at a charity event in July.

Celebrity Style
Get Acquainted With Ella Emhoff's Personal Style, Because We're All About It
by Nikita Charuza 3 days ago