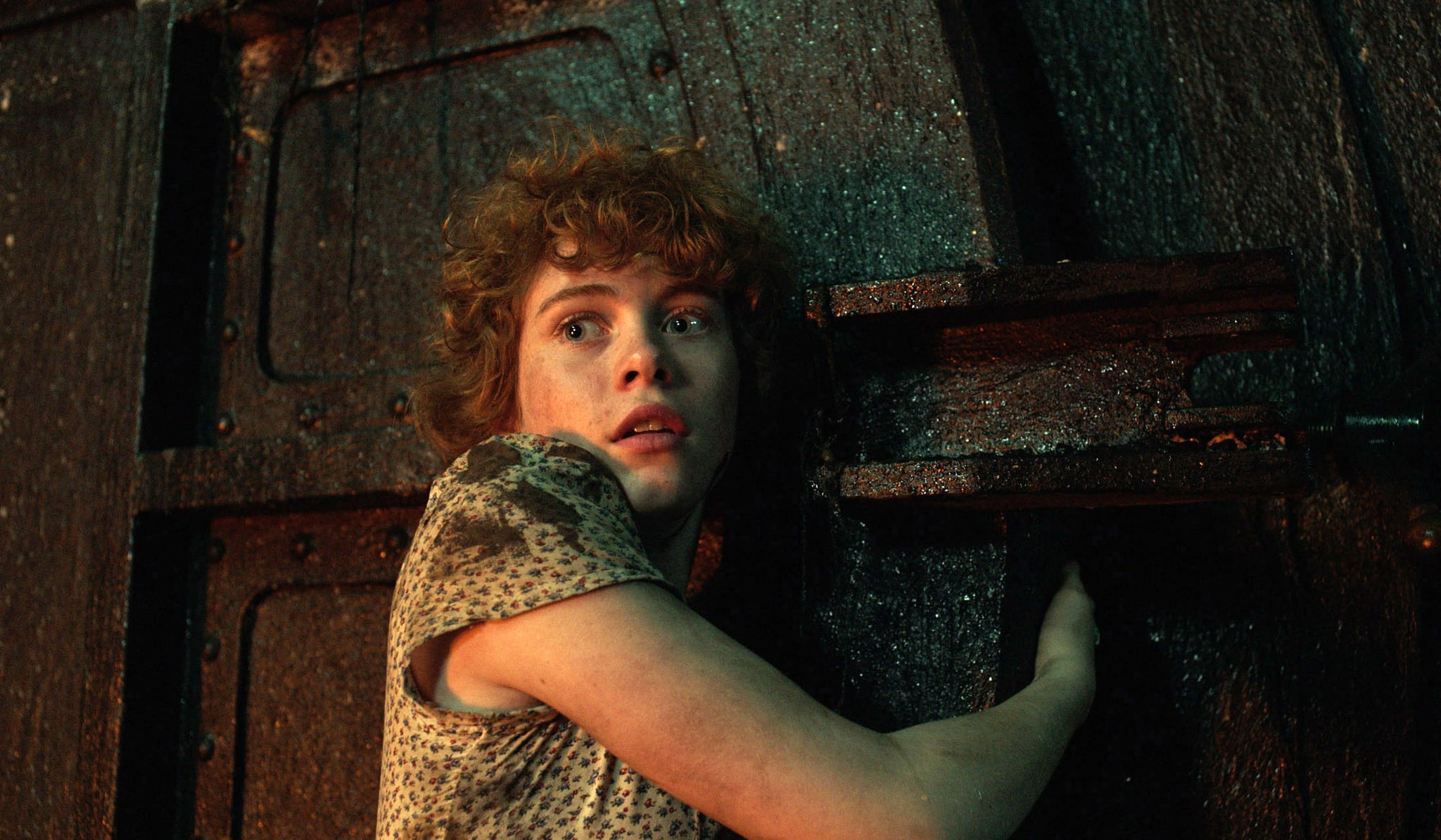 Spoilers for the It movie and novel below!

For the most part, the recent It film adaptation is pretty faithful to Stephen King's original 1986 novel, but there are a handful of key differences. In addition to leaving out the controversial sex scene, the updated iteration of the beloved horror tale also features a scene with Beverly Marsh (the only female member of the Losers Club, played by actress Sophia Lillis) that doesn't happen in King's story. At least, not at first.

After Bev is kidnapped by Pennywise and dragged down to his lair, the demonic, shape-shifting clown holds her up in the air by her neck and opens its jaw all the way back so she's forced to stare deep into its throat. There are some glowing, orange lights moving around in there, which instantly cause Bev to go into a strange trance. She's eventually woken up when Ben Hanscom (Jeremy Ray Taylor) kisses her, but the weird moment otherwise goes unexplained in the film. Fortunately, the scene is very reminiscent of something that happens to a different character at the end of the It novel. Before we get to that, though, you have to understand what those lights Bev sees actually are.

Related:
A Quick Explanation For That Creepy Line of Dialogue You Hear in It

The orange lights are known as the "deadlights," which are what make up the creature known as It. It might appear as Pennywise the clown most frequently, but the ancient evil entity's natural form actually exists in a cosmic realm between worlds (a plane referred to as the Macroverse) and is therefore unable to be processed by the human mind. The closest approximation to It's true form, other than the lights, is a giant female spider. Otherwise, anyone who views the lights is said to go insane. As kids, Bill comes face-to-face with the deadlights after looking into It's eyes, which he describes as a crawling, hairy creature made of orange light. Thankfully, he looks away in time to avoid irreparable damage.

As you know, the Losers Club grows up and returns to Derry 27 years later to defeat evil once more. Bill's new wife, Audra, is dragged down into the sewers by Bev's abusive husband Tom, who's under the influence of It. There, the pair see the deadlights, and although Tom instantly dies from shock, Audra goes into a trance similar to the one Bev experiences in the 2017 film. She's revived later on when Bill takes her for a ride through Derry on his bike, Silver.

The mythology surrounding the origin of It, as well as the deadlights, is vague regardless of whether or not you've read King's books (they also pop up in Insomnia and The Dark Tower). It seems as though the deadlights pull your mind into the dimension from where It is from, rendering you incapable of controlling your own body. They also tie into the magic of the Crimson King character, aka the main antagonist of The Dark Tower series.

Related:
Here's What You Can Expect From the It Sequel

Clearly, the latest film seems to be tweaking the mythology a little, since Bev doesn't go insane after witnessing the deadlights. We still don't know where It comes from in the movie, but it is made clear that the creature has been around for decades at the very least. In the It sequel, director Andy Muschietti told Yahoo Movies he will introduce this aspect of the lore. "I really wanted to focus on the emotional journey of the group of kids," he said. "Getting in to that other dimension — the other side — was something that we could introduce in [the sequel] . . . In the book, the perspective of the writing is always with the Losers [Club], so everything they know about Pennywise is very speculative and shrouded in absurdity, so I wanted to respect that mystery feeling of not knowing what's on the other side."

Here's hoping the sequel sinks its teeth into this mysterious layer of King's chilling story.

Celebrity Interviews
Gal Gadot Was Inspired by Princess Diana For Wonder Woman: "She Was Full of Compassion"
by Grayson Gilcrease 1 day ago
Movies
Nicole Kidman Dons Lucille Ball's Signature Red Hair on Set of Being the Ricardos
by Kelsie Gibson 2 days ago