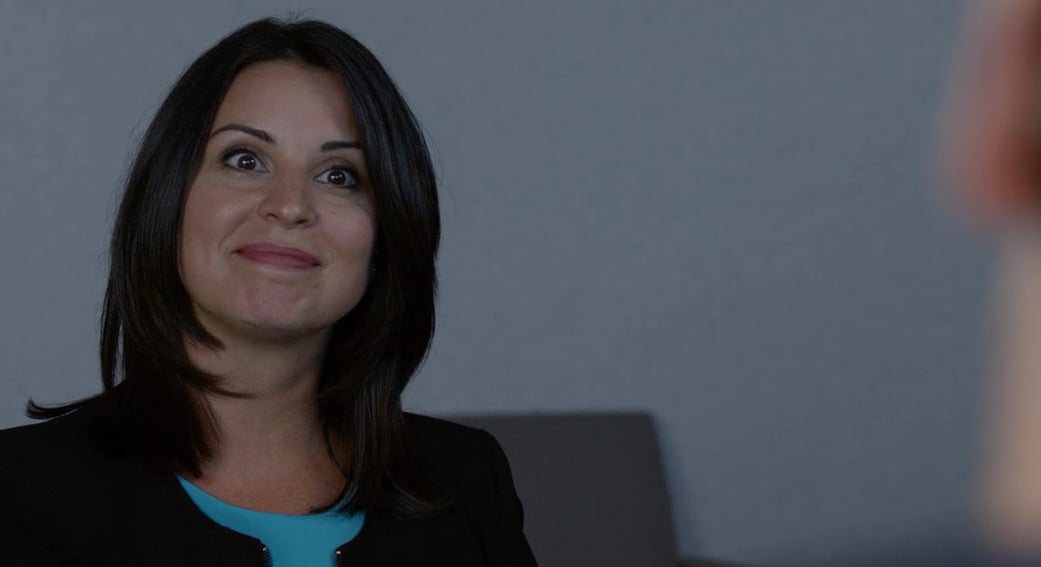 Spoilers for season five of Orange Is the New Black!

After spending Orange Is the New Black season four as a cog in the MCC machine, hopping in bed with Caputo (Nick Sandow) because it seemed like he was on his way up the corporate ladder, Linda (Beth Dover) is moving more to the forefront in season five, having been caught up in the prison riot because she's in the bathroom when all hell breaks loose.

Linda is lucky the people who find her are Piper (Taylor Schilling) and Alex (Laura Prepon), because they aren't active enough in the riot to throw her to the wolves. Instead, they get her some prison garb and start coaching her on a backstory, the idea being that Linda can just try to blend in until this all blows over.

But until then, viewers are treated to her real backstory — which is pretty awful, but also unsurprising considering what we've seen of Linda so far.

The year is sometime in the mid- to late-'90s — you can tell because the fashion is still veering toward Cher in Clueless — and Linda is an Alpha Zeta Delta, which is one of those sororities that makes the news when the president or Greek Week chair or whoever sends out a terrifying email blast that makes her (and the entire organisation) sound insane.

Not all sororities are like that, of course, but some of them are, and Linda is a proud member of one of those sororities.

Her big sister in AZD is Megs (Stephanie Leone), who gives an in-person version of one of those crazy emails and then goes to a party and gets completely blitzed. Linda goes outside with Megs for a bathroom break, but the drunk Megs is taking too long, so Linda leaves her there because she'll probably be fine, right?

Nope. Megs is super drunk, she is wearing practically nothing, and it's a freakin' blizzard outside. Linda should never have left Megs alone, and she certainly should have checked on her at some point, but Linda is pretty much the worst and Megs freezes to death in the snow.

The next morning, Linda lies to the cops about being the last person to talk to Megs and suggests that her big sister had a drinking problem. That might very well be true, but Linda definitely does not take responsibility for the part she played in Megs's death, though she's more than happy to take over Megs's responsibility within the sorority. That's ice cold.

For a refresher on how each Orange Is the New Black woman ended up in Litchfield, check out this handy guide.