When the new pictures of Game of Thrones blasted onto the internet, we were mostly grateful to be reminded that season seven is imminent. And it's not to say that the pictures aren't exciting; let's just say that HBO doesn't give away a ton when it comes to this show. However, eagle-eyed fans (aka huge nerds) like myself spend a lot of time poring over these images and looking for clues for the new season. While we can theorise, the pictures don't give away much. 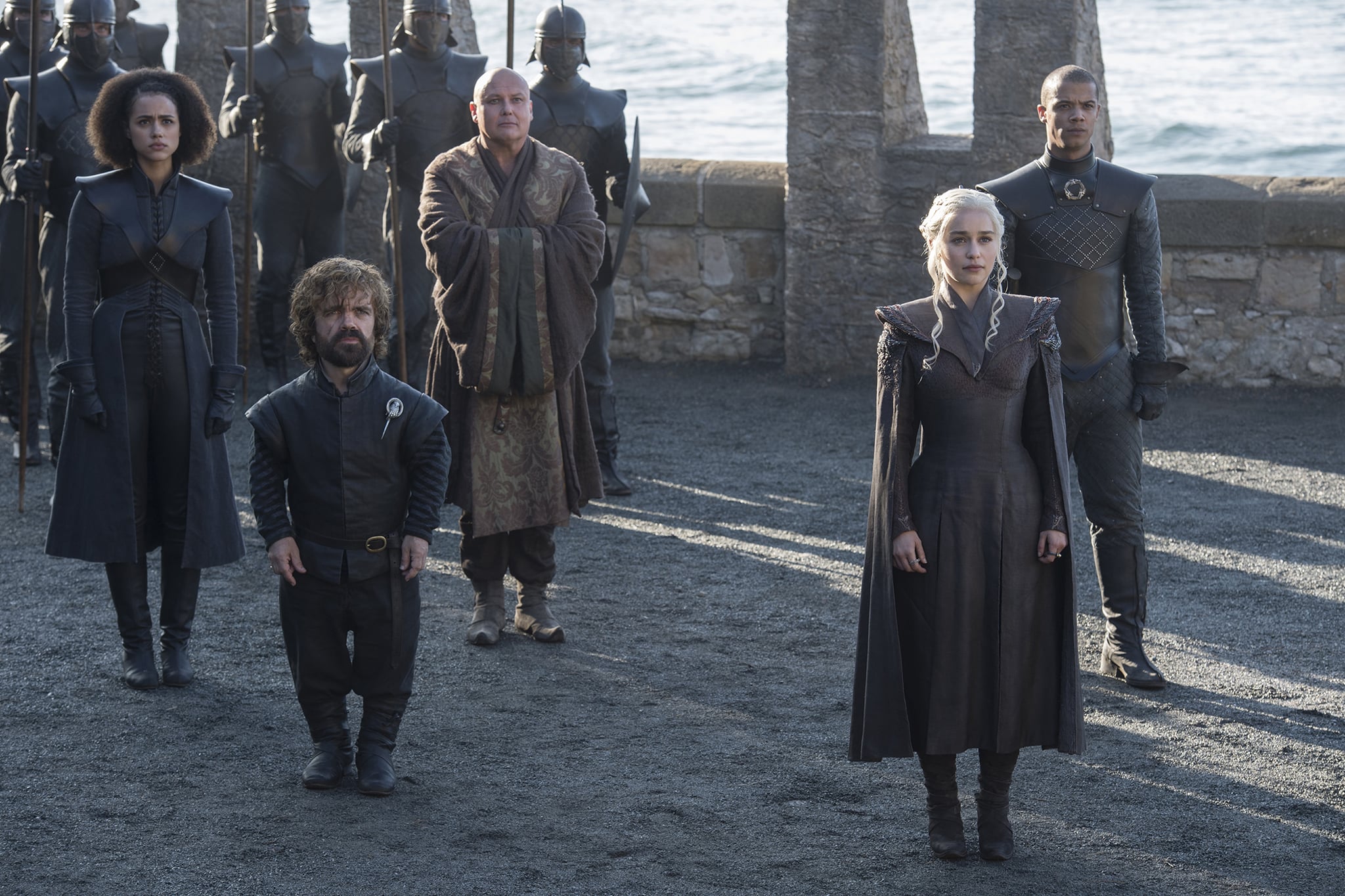 In this picture of Daenerys's inner circle, Missandei, Tyrion, Varys, and Grey Worm stand in formation before their army. What's most striking is how in tune they are, how fierce, and how determined. They are a unit, thanks in part to the way they're dressed. While Varys and Tyrion are wearing clothes we've seen before, Dany, Grey Worm, and Missandei are substantially more covered up in black leather (perhaps you've heard that Winter is coming to Westeros). That's not all: look closely at Grey Worm's collar. 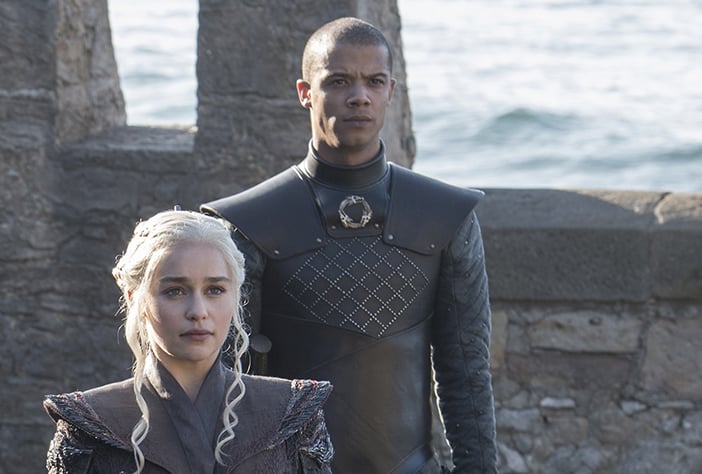 The pin has three dragon heads, which means a couple things:

Before we expand on those, please note another picture from the new set where the pin appears, but on someone else: Missandei. 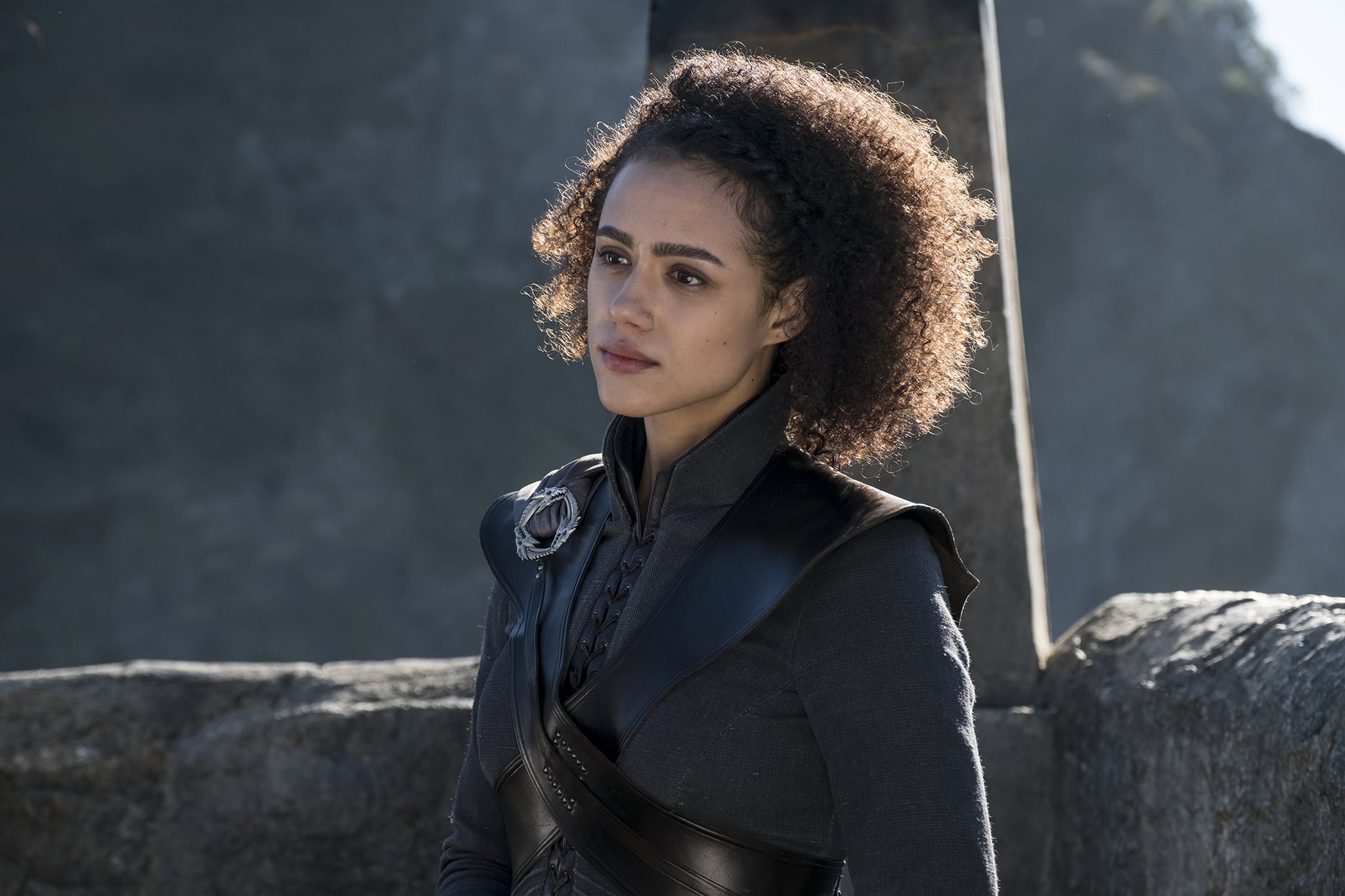 The pin appearing on someone else leads us to two other further conclusions: either Missandei gets her own pin some time after Grey Worm and they both have pins, or that's Grey Worm's pin (which, uh, please don't tell me that Grey Worm dies at the beginning of season seven and that's why she has the pin).

Now let's back to those conclusions we were just starting to form. Perhaps more importantly, this symbolism is another reminder of the three heads of the dragon theory. To refresh you, Daenerys had a vision in the House of the Undying where her brother, Rhaegar, told her that "the dragon has three heads." The most popular theory assumes that Daenerys, Jon, and Tyrion are essentially the three heads (as Targaryens), and each is envisioned as being the rider of one of Daenerys's three dragons.

That theory hinges on Tyrion secretly being a Targaryen, but it also reminds us that at some point, Dany's three dragons will probably descend on Westeros in battle, the way her ancestor Aegon and his sisters rode the world's last three dragons to conquer Westeros. What if Dany wants to ride her three dragons into battle but picks her two other riders from her inner circle, i.e., Missandei and Grey Worm?

Related:
The 11 Most Important Game of Thrones Season 7 Moments (So Far)

OK, I know that was a lot to follow, but there's one thing that's absolutely certain: that pin is distinctive for a reason, and I think it means that Daenerys is establishing a new chapter for the Targaryens, one which pays respect to the past but represents her fresh vision of breaking the wheel — and taking the Iron Throne back.