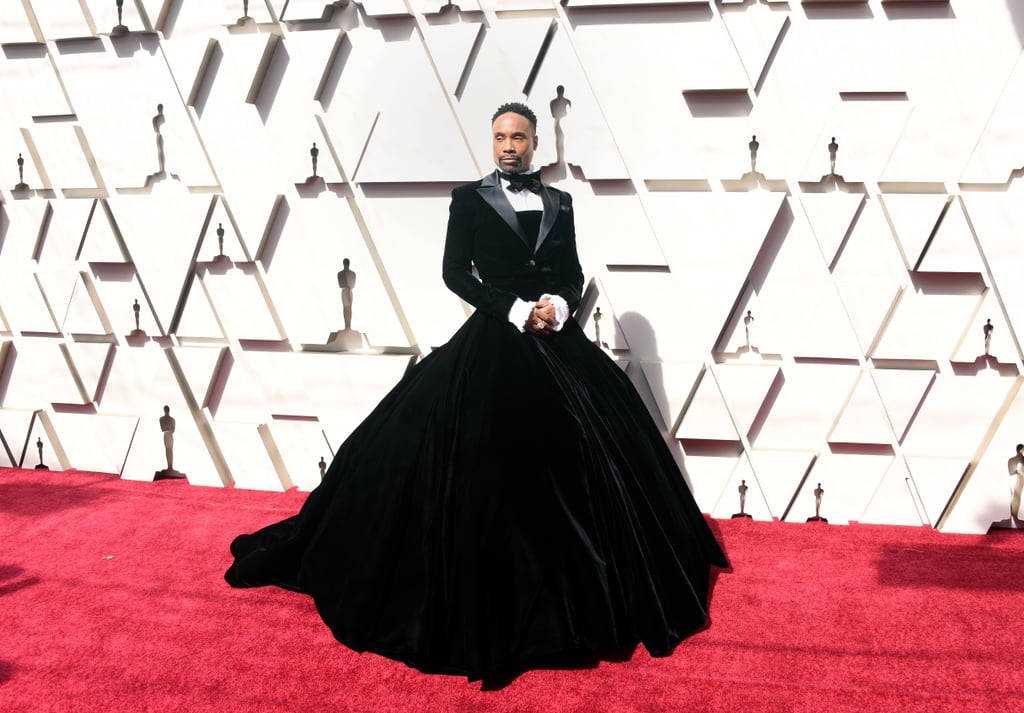 Love Billy Porter's Oscars Look But Can't Place How You Know Him? Read This

On most red carpets, it's the ladies who get all the buzz and attention, but at Sunday night's Oscars, one of the biggest red carpet showstoppers was actor Billy Porter. The Pose actor arrived on the red carpet, alongside husband Adam Smith wearing a stylized tuxedo gown that was classic tux on the top and massive velvet ballgown from the waist down. His look is fantastic — and so is his career.

Porter is already halfway to an EGOT, with a Grammy and a Tony to his name. Both of those awards came for the same role: his 2013 turn in the Broadway adaptation of Kinky Boots. The musical, adapted from a 2005 British comedy, tells the story of Charlie, a straitlaced and somewhat hapless young man who inherits a shoe factory from his father. Porter played Lola, a deeply fabulous drag performer who teams up with Charlie to produce a line of high-heeled boots in hopes of saving the factory. Porter's iconic performance — featuring tons of sparkles and showstopping numbers like "Sex Is in the Heel" — not only took home the Tony Award for best leading actor in a musical, but the equivalent awards at the Outer Critics Circle Awards and the Drama Desk Awards. As one of the leading vocalists on the Kinky Boots cast recording, he also shared in the musical's Grammy for best musical theatre album.

Although Kinky Boots was his breakout role, Porter already had a robust theatre career long before then. He made his Broadway debut as Teen Angel in the 1994 revival of Grease, and he went on to star in a slew of productions at regional theatres, including Jesus Christ Superstar and Dreamgirls. He continued a career as a singer and cabaret performer in New York, and in 2005, he wrote and starred in a one-man autobiographical show, Ghetto Superstar (The Man That I Am), which was performed at the iconic New York City venue Joe's Pub. As a playwright, Porter also created the off-Broadway play While I Still Live in 2014.

For most TV audiences who aren't theatre fans, Porter is best known for his leading role as Pray Tell on the FX dramedy Pose. For this role, he was nominated for the Critics' Choice Award for best actor in a television drama series, as well as the Golden Globe for best actor in a drama series. He continues to star in the groundbreaking Pose, with its second season is set to debut later in 2019. Porter also joined the American Horror Story universe in the 2018 instalment American Horror Story: Apocalypse, where he played Behold Chablis.

Porter is also a recording artist, with four albums under his belt; his most recent, Billy Porter Presents the Soul of Richard Rodgers, was released in 2017, featuring big Broadway names such as Hamilton's Renee Elise Goldsberry, Christopher Jackson, and Leslie Odom, Jr., Brandon Victor Dixon, and Todrick Hall, as well as recording stars Pentatonix and India Arie. The album blended classic Broadway showtunes with a contemporary, boundary-blurring aesthetic — something that seems to describe Porter to a T, as these amazing images from his Oscars look prove!