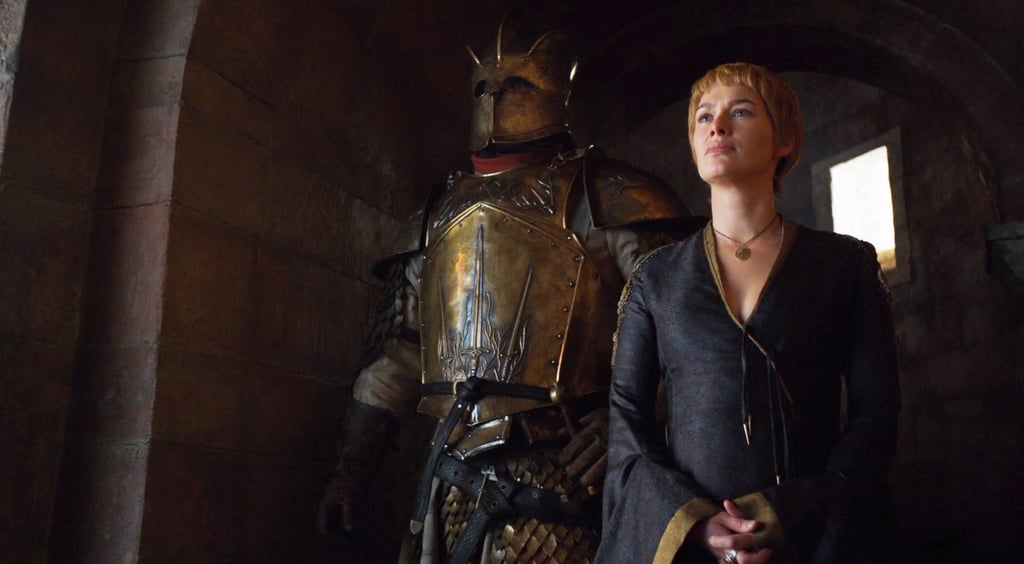 When Cersei Lannister finishes her walk of nude shame at the end of season five of Game of Thrones, there is one man standing above all others waiting to take her to safety. Cersei's faithful lackey Qyburn introduces him as the newest member of the King's Guard. She seems to instantly know him and allows him to pick her up and carry her. OK, he may not exactly be a man, or not a living man, but he is definitely standing above the rest. This mountain of a warrior appears to be a mystery, though we have some idea of who he may be.

Why the Guard Is (Very Likely) The Mountain

The best clue is in season six's second episode; the way he bashes in a man's head instantly reminded us of how Gregor Clegane (aka The Mountain) crushes Prince Oberyn Martell's skull. The Mountain has been grossing us out from the beginning, when on season one he chops off a horse's head and tries to take down Loras Tyrell. The legend of his unsavory deeds (murdering Oberyn's sister and her children, and worse) is what brings Oberyn to King's Landing for revenge in the first place.

Why He Owes His Life to Cersei

While The Mountain squashes Oberyn's head like a melon, Oberyn's spear is poisoned. When he instantly falls ill, Cersei allows Qyburn to work on The Mountain. Remember that Qyburn is not a Maester like so many of the healers of the Seven Kingdoms, because he is kicked out for experimenting on people with dark arts.

So when Qyburn shows up with a man the same size as Gregor, eyes that look like those of a corpse, and who has supposedly taken an oath of silence, we know it is very likely a new version of Gregor that Qyburn has done something dark and sinister with. The difference in the books is that Gregor's head is supposedly sent to Dorne, to show he is dead so justice had been had. But the fact that our revived Gregor still has his head isn't likely to change the story much.

If Not The Mountain, Who Is This Guy?

Honestly, nothing else in the story would make sense. Any other reveal would be a letdown and feel like a cheat, so we're just going to stick to the theory that it is indeed The Mountain for now.

What Does This Mean Going Forward?

We are bound to have some great conflict between Cersei with her protector on one side and the High Sparrow's army on the other. As to whether we'll get to see him without a helmet, we'll have to just stay tuned.