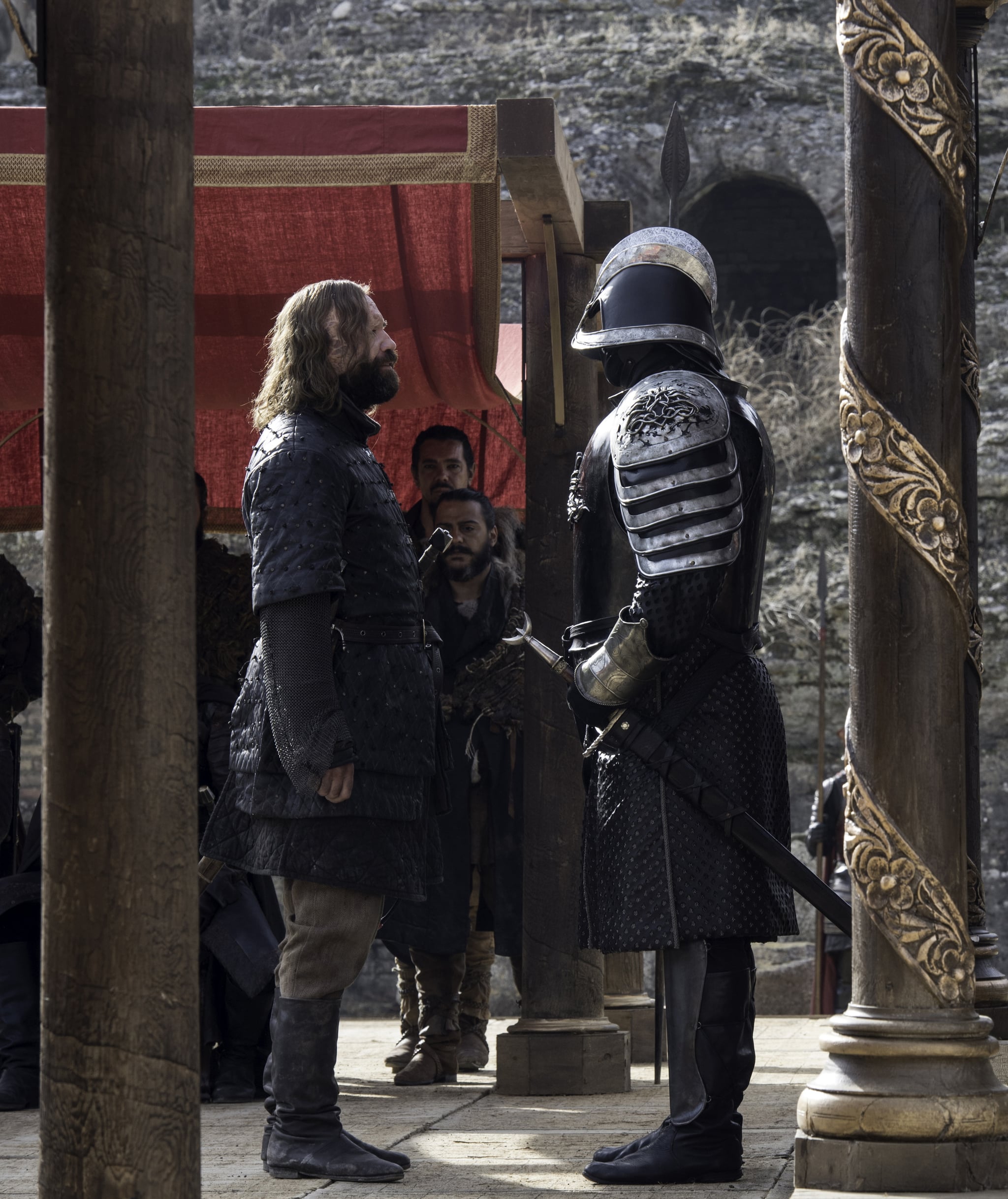 The Game of Thrones writers are basically Lucy jerking the football away from Charlie Brown at this point. Hype reached a fever pitch for Cleganebowl believers when The Hound and The Mountain came face to face in the dragon pit during the season finale. Instead of throwing down, The Hound looks into his brother's undead eyes and says to him, "What did they do to you? Doesn't matter, it's not how it ends for you, brother. You know who's coming for you. You've always known." Wait one second, Sandor, who exactly is coming for The Mountain? The Hound may know, but fans are more than a little confused.

Let's take a look at the simplest answer first — The Hound is referring to himself. His hatred for his vicious brother runs deep, and even though there is some serious debate on how alive The Mountain is, his little brother wants him dead (Like, dead-dead). After all, he's the man responsible for The Hound's scars, and in the books, the youngest Clegane also seems to believe his brother murdered their sister. For those reasons, his warning may have been a threat. Unlike Euron, The Hound isn't interested in making a scene. He's seen the army of the undead now, and he knows there will be another time and place for him to deal with his brother.

The Hound isn't the only person gunning for The Mountain, though. Another option is Arya. The Mountain is on her list, and The Hound heard her recite it many times during their travels together. When you add in the Lord of Light sending The Hound a vision out of the blue earlier in season seven, it stands to reason that that vision may not have been his first. It's possible he saw something in the flames all those years ago when The Mountain burned him for playing with his toys. Having The Hound know that Arya would come for his brother one day would be a cool twist — although it's a stretch.

The most likely answer remains The Hound himself. With Oberyn Martell dead, he's the one person who hates The Mountain most in the world. With the threat of the White Walkers weighing on him, The Hound likely made a decision upon seeing what's left of his brother. Rather than strike now, he would simply remind The Mountain that the day would come when they would meet in battle. As far as The Hound is concerned, no one gets to kill his big brother except for him.

Related:
Who's Still on Arya's Kill List on Game of Thrones?

Either that, or Game of Thrones just dropped an eleventh-hour prophecy on the fans, and seriously, can anyone handle another cryptic prophecy at this point? The Wall just fell, and that's taking up all of our brain space at the moment. Besides, to believe any other theory would mean accepting that Cleganebowl will never happen, and let's be real, the hype for that particular showdown is not going anywhere anytime soon.

In other words, Cleganebowl is totally happening in season eight, and we can't wait.