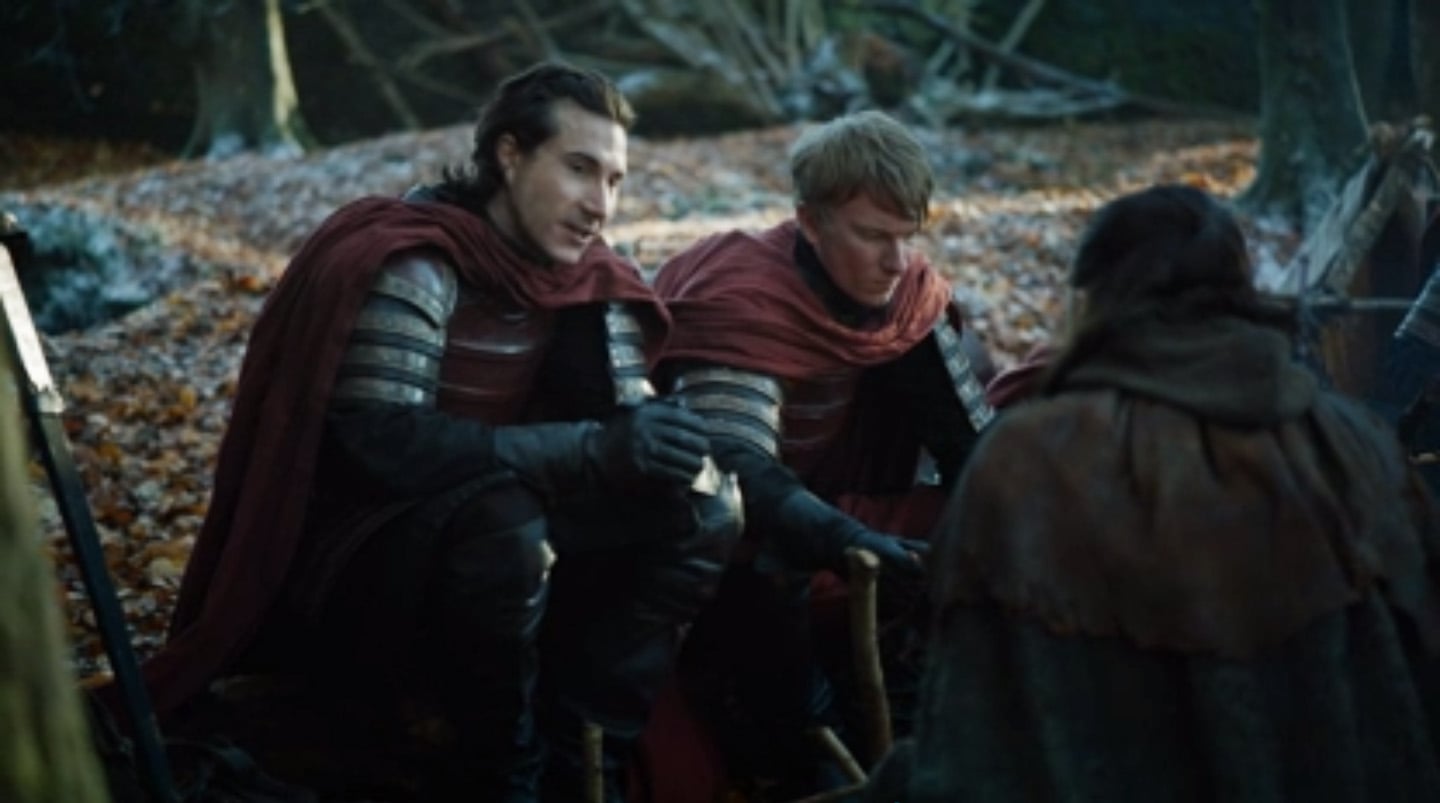 The season seven premiere of Game of Thrones is good to Arya. First, she kills off the rest of the Frey family by assuming Walder Frey's face, and then she gets to hear an original Ed Sheeran song while she's on her way to King's Landing. It's OK to be envious — we are. Sheeran is just one member of a group of young Lannister soldiers that Arya runs into in the premiere. If you're wondering who those men were, well, they're part of the queen's army.

It seems Cersei sends these young soldiers to keep the peace in the Riverlands after word of the Frey massacre reaches King's Landing. None of them offer up their names to Arya, but they do share their rabbit, and for that she seems grateful. Though you might expect Arya to kill the men based solely on their alliance, she instead listens to their stories about missing home and seems to relate. It's the rare scene in Game of Thrones where no one ends up dead, and everyone is happy. And, yes, that is almost more shocking than the Red Wedding.

Related:
Game of Thrones: Who Are Those Kids Swearing Allegiance to Jon Snow?

Leaving these characters nameless drives home how easy it is for those in charge, like Cersei, to use the small folk to fight their battles. Through their conversation with Arya, we learn all of these young men wanted to escape the war-torn streets of King's Landing when they joined Cersei's army, but now they just want to return home. Arya recognises that these "men" are just boys themselves, and they're caught up in a war they don't truly want to be a part of, just like her. Maybe that's why she accepts their offer of food and conversation, rather than seeing their red cloaks and immediately identifying them as her enemy.

Or maybe the other soldiers owe their lives to Sheeran's gorgeous vocal stylings. It's his character's song that brings Arya to a stop, and we can't blame her. His song goes unnamed in the episode, but it's a beautiful ode to the awesomeness of women — fitting for an episode where women rule Westeros like the queens they are. Even though we knew Sheeran's guest appearance was coming, seeing it in the season's first episode is a total surprise. And knowing that Maisie Williams is a huge fan only made it all the sweeter.

It's unlikely these particular soldiers will show up again in season seven, but it would be fun to see them kicking themselves if Cersei really does end up dead by Arya's hand. They assume she's joking when she declares her intent to kill the queen they serve, but she's completely serious. With any luck, her encounter with these good-natured Lannister men will stick with Arya as she continues her quest to cross off the rest of the names on her list. By sitting down and sharing a meal with people who fight for the South, Arya gains some perspective about what war drives common people to do. Most of these soldiers are just boys who were looking for adventure. One has a child but doesn't even know if it's a boy or a girl yet. The past few years have been hard for Arya, and that's why it's so important for her to realise not every person she meets intends to do her harm, as these Lannister soldiers prove with their generosity.

The lesson to be learned here is that if you stop and say hello to the strangers you meet on the road, you might just get a hot a meal and the chance to hang out with Ed Sheeran, even in a place as bleak as Westeros. Let's hope Arya cherishes this moment of calm with a group of lovable fellows, because it's clear Winter is coming fast for this lone wolf.