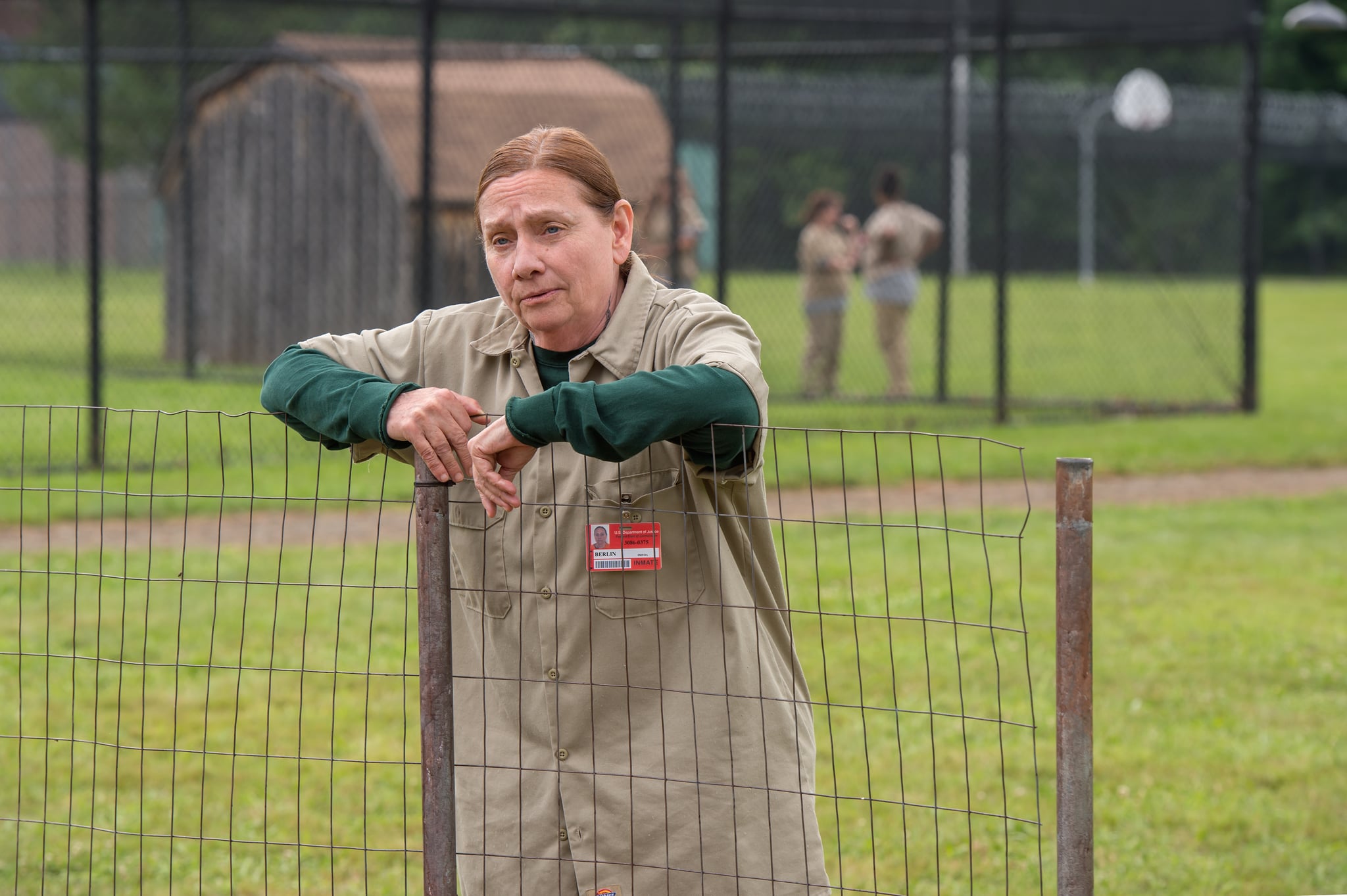 Few things sum up the Orange Is the New Black character Frieda Berlin better than one of her quotes from season four: "Why dig one six-foot hole when you can dig six one-foot holes? That's just murder math!" Frieda, played by actress Dale Soules, is a callous, no-nonsense old gal who boasts neck tattoos and a brittle sense of humour. The last two seasons really highlight how bloodthirsty she actually is, while allowing the occasional glimpse of a vulnerability she might possess deep down. So, who is Frieda Berlin? Here are some things we've learned.

She's doing time for cutting off her husband's penis.

With pride, Frieda explains to Gonzales how she ended up in prison: She removed her husband's penis, using a butcher knife . . . that wasn't even sharp. "I still dream about it," she says. "All the blood. The way it flopped around in my fist. Best thing I ever did."

She's a member of the Golden Girls.

Frieda hangs out with the other older ladies at Litchfield in a clique referred to as the Golden Girls. Yet Frieda views old age as an asset in prison; if everyone thinks they're feeble, they're constantly underestimated and ignored, so they can get away with anything. Of course, the word "Golden" refers only to their time of life. There is nothing sunny about Frieda Berlin.

To Alex's dismay, Frieda discovers the body of the murdered guard, but it turns out that Frieda is the best possible person to have on hand in exactly this situation. Although she won't answer Alex's inquiry about whether she'd ever killed a person ("That's personal"), she sure knows a lot about dismembering a body and strategically planting the remains.

Really, she is most likely an actual murderer.

Frieda claims to have killed a cop with his own gun, and her answer to most conflicts with other inmates is to kill them or at least threaten them a little. On a few occasions, Frieda suggests murdering Lolly to silence her incriminating rants, and Red clearly believes Frieda would do it.

She is no-nonsense but loyal.

Frieda doesn't suffer fools but when she identifies an ally; she sticks with them. In season two, she lands firmly on the side of Team Red and never looks back, loyally fighting Red's battles and proving to be a helpful comrade.

There's a tiny bit of soft tenderness somewhere deep down within Frieda.

When Lolly panics and tries to dig up the body parts buried in the garden, Frieda calmly diffuses the situation by claiming she already moved the body parts to another location. Despite her blustery detachment, Frieda has a sensitive intuition about people, and perhaps it's because — as she roars at Baxter Bayley when he hits her with an egg — she is a human being.

In the second episode of season five, Frieda gets her own backstory. She grows up with a single dad after her mother dies, and he raises her to be a survivalist (he's a crazy Communism conspiracy theorist). They go camping one night, and when she wakes up in the woods the next morning, she realises her dad has left her all alone in the middle of the woods with only a needle, a metal pot, and a small knife. We get an idea of the depth of her survival skills when she fills the pot with water, places a leaf on top of the surface, and rests the needle on it, which works as an impromptu compass. She manages to find her way home a few hours later (after an incredibly gross run-in with some leeches, that is).

She builds a secret compound under the prison.

It turns out Frieda has been hoarding food, water, furniture, and other essentials throughout her stay at Litchfield. Using her survival skills, she secretly takes over some connected, abandoned rooms in the basement of the prison and turns them into her private hideaway. Talk about being resourceful.