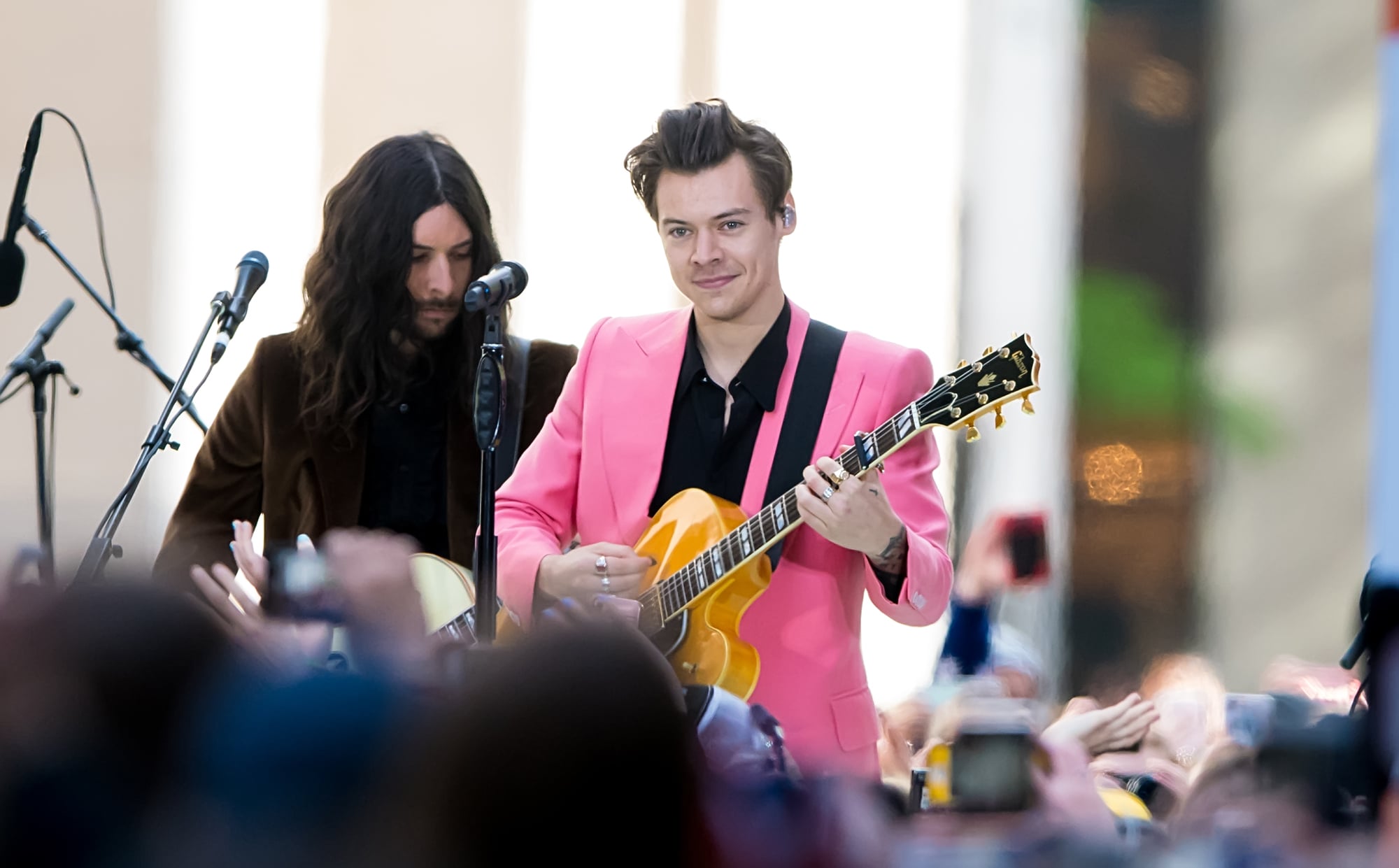 It's inevitable that whenever a new song comes out, people are going to speculate about what (or who) it might be about. It's especially inevitable when the artist is one with legions of dedicated fans and the song in question is about a girl. Case in point: "Carolina" by Harry Styles.

Let me preface this whole shebang with this: I'm a massive, massive fan of Harry's, and while I do like to casually consider who he's writing songs about, for the most part I don't care. This is not coming from a place of jealousy or hatred for the lucky people who get to spend time with him. This is merely a statement of facts and maybe a sprinkling of my opinion. We good? Then let's carry on and dive into this highly publicised story behind the song "Carolina."

For the too long, didn't read crowd, here is the rumour being spread about the story behind the song: Harry met a girl, possibly on a blind date three years ago, possibly last year, she's from South Carolina, they had fun, he wrote a song about her and put her name in it, fans are jealous because she lived the dream. Ta-da!

Dissecting a song doesn't take anything away from the music. It gives the listener a way to connect to it in a new way.

For those of us who want to really take a good look at this, here's my breakdown. First of all, the line in the song with her name is, "She's got a family in Carolina / So far away but she says I remind her of home / Feelin' oh so far from home / She never saw herself as a West Coaster / Moved all the way 'cuz her grandma told her 'Townes, better swim before you drown.'" The girl in question is one named Townes. There is truly a girl from South Carolina who's name is Townes and who appears to fit the narrative in the song of having family in Carolina and then moving to the West Coast. In true One Direction fan fashion, she was tracked down on the internet approximately .4 seconds after we realised her existence. Because of her social media being very locked down, I'm choosing to not share her pictures or handles here, out of respect for the privacy she clearly wants.

Now here is why I think the whole thing is fake.

The Daily Mail's story on Townes says she and Harry met on a blind date a couple years back, but Harry said more than once — in his interview with Radio 1 Breakfast Show host Nick Grimshaw and in his Behind the Music documentary — that "Carolina" was the last song he wrote for the album, which would mean it was late last year. Specifically, Harry told Nick that he had been a one-to-two-week funk with writing and then he went out and it was "really fun," which led to the fun song the album was missing. Did he meet her three years ago and then again last year? Supposedly they only met once. So now the timeline doesn't make sense. 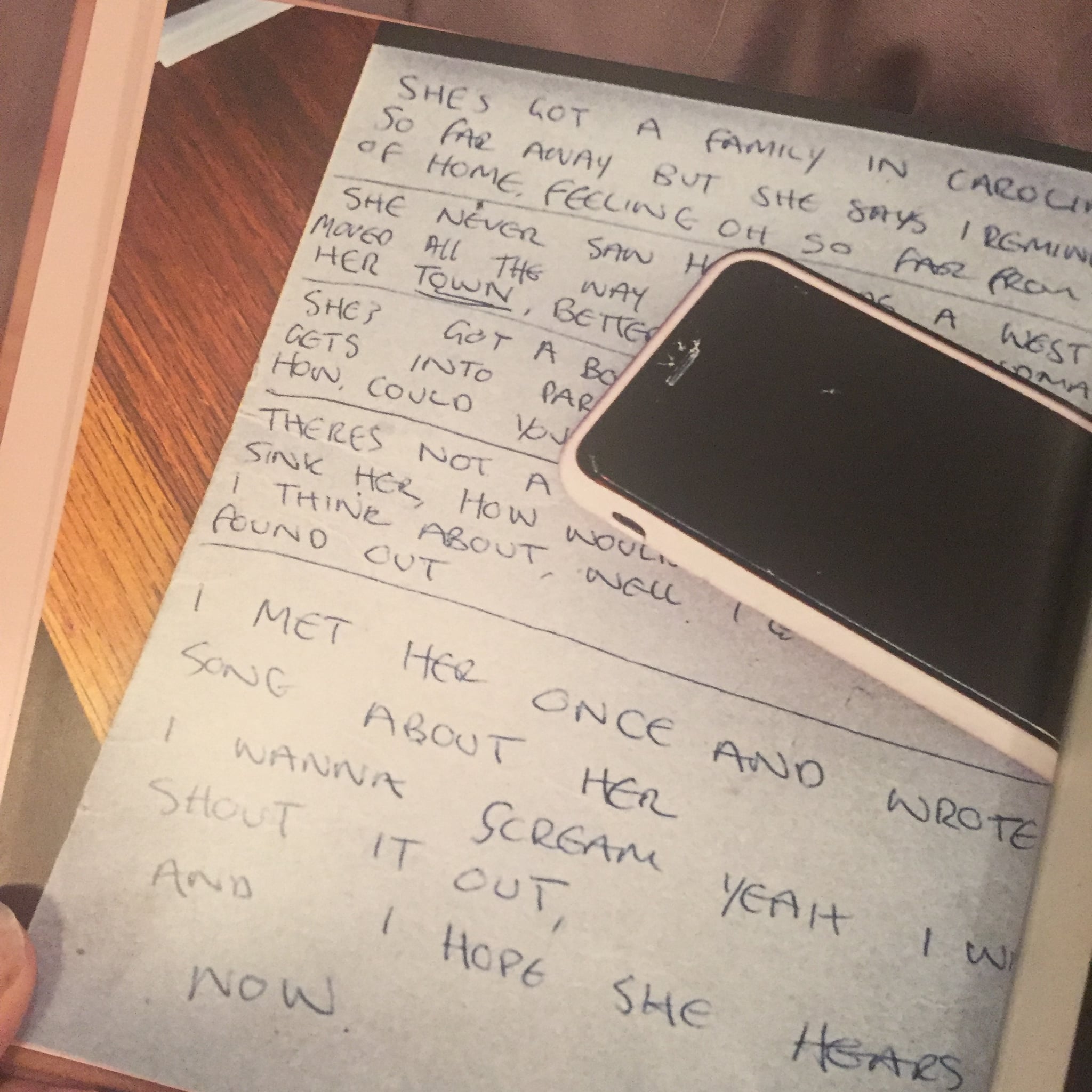 In the photo booklet that goes with Harry Styles, one of the pages has Harry's handwritten lyrics for "Carolina." In and of itself I find it to be interesting that it's one of the only photos of Harry's lyrics in the booklet. What's even more interesting is that instead of writing "TOWNES," he wrote "TOWN" and underlined it. Did the lyrics change at some point, maybe at someone's request? Or maybe Harry just didn't know the girl's name. Odd.

Townes supposedly found out about this from her dad

Harry told Nick on the Breakfast Show that prior to the album being released, the girl in question had no idea about the song. Harry said she heard about it when her dad heard him perform it on Today for the first time. Harry said the dad called her up and said there was a song about her. Let's rewind. Harry and Townes supposedly had a very brief whatever-it-was, but her dad knew about it? Um, I know I'm not everyone, but my dad would probably never know about someone I maybe, probably casually hooked up with. Even if it is Harry Styles. And somehow Harry found out about that? So I guess he and Townes kept in touch? Also, the fact that dad picked up on her name in the song and knew it was about her is . . . more than anyone else did. The name "Townes" in the song is very, very hard to pick up on. So, good on you, Dad. I guess?

Harry is a private person

Next, Harry is notoriously private about his personal life. His undoubtedly most high-profile "relationship" (and I use that term loosely) was with Taylor Swift several years ago, and he still won't really comment on it other than what he has to say to keep the conversation moving. (If you think this was for more than publicity, let's have another chat later.) He's been linked to numerous other people and always plays his cards close to his chest. So why now would he choose to be so blatant with dropping someone's actual name into a song? That's a bold move for such a private man. She either left a huge impression on him in a short time or something fishy is going on here.

Harry likes to be vague

Harry has been asked several times during his promo for the album about who or what his songs are about. Most answers are pretty similar in that they're incredibly vague. He told USA Today, "I've never really felt like I've had to explain my personal life. . . . I love that with writing, you get to wrap it up with a song. I understand that people will dissect stuff like that, which is amazing, that people care enough about you to try and figure out what it means." He won't say specifically who or what any song is about because he claims he wants the listeners to come up with their own ideas. But he slaps us right in the face with the subject of "Carolina." OK.

The connection between Townes and Harry's people

Another red flag that causes this narrative to not quite work is the fact that it appears that Townes has at least a very small tie to Harry's management. Specifically, she and Harry's manager Jeff Azoff's younger brother are Instagram friends. Listen, I know that's a bit of a reach and being social media pals isn't much, and for all I know, that's the connection that brought Townes and Harry together in the first place, but I find it interesting. I'm also aware that this is borderline crazy to be looking for tiny tidbits that mean absolutely nothing. Personally I think it feeds into what I ultimately believe to be what's happening: publicity.

In conclusion: it's publicity

There is nothing wrong with doing things for publicity. It's all part of celebrity life. Harry is crafting his new career around an image that he wants people to see. In my opinion, he's aiming to strongly distance himself from the boy-band image, and if that means having a brand-new girlfriend, which is another conversation for another day, and writing songs about casual flings that may or may not have happened, then that's fine.

The only thing I know for certain is that "Carolina" is a f*cking jam that literally everyone should listen to.

While a sizeable camp of Harry's fans are salivating over his love life, there's another large and very vocal group who want the topic laid to rest for the sake of the music. For real, though, dissecting a song doesn't take anything away from the music. It gives the listener a way to connect to it in a new way. I love "Carolina," and going through this whole breakdown of why I think the story behind it is fake hasn't made me love the song any less. It's important to remember this as fans. It's also important to remember that we aren't going to love every decision Harry makes and that we don't actually know anything real about Harry. Shocker, I know. We know what he wants us to know. That being said, I do still believe he's a good person. A very wise, good person.

At the end of the day, this bout of publicity isn't negatively affecting anyone. Surprisingly enough, from what I can see, Townes isn't getting much negative blowback from fans because of the narrative Harry and his team are pitching. You know what is happening, though? People like me are writing massive stories about this theory, which is getting everyone to talk about Harry and "Carolina." So whether or not Harry and Townes had a thing is still a mystery, if you ask me. The only thing I know for certain is that "Carolina" is a f*cking jam that literally everyone should listen to. It's easily one of the best tracks on Harry Styles by Harry Styles and you can listen to the song below.