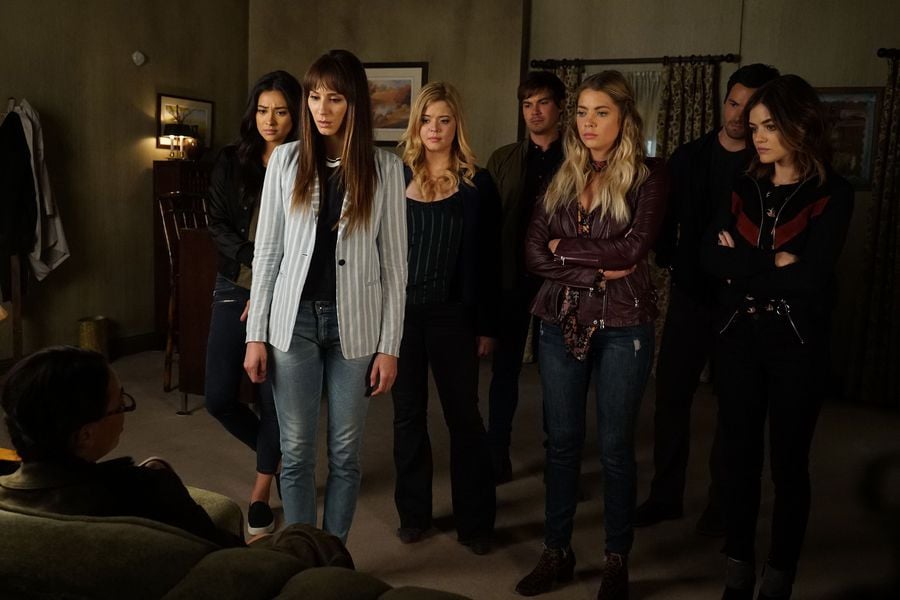 We're down to the wire in the Pretty Little Liars series (excuse us while we cry forever). But the upside is that we're getting answers to some of the biggest questions that have been on our minds! One of them is simple: Who killed Charlotte DiLaurentis? Well, on the second to last episode ever, we got our answer. Ready? Are you sure? Drumroll, please . . . Mona Vanderwaal.

We know that Mona has been trying to get back into good graces with the Liars even more recently (remember, she was the Original A, after all), but we're not sure how they're going to take this whole Mona-the-Killer thing! In a flashback to the day that Charlotte is released from captivity at the beginning of season seven, we see that Mona invites Charlotte to meet at the infamous church steeple. The conversation quickly turns unfriendly and Mona tells Charlotte that she knows how she's been playing all the doctors, lawyers, and courts with her "progress." Mona says that she won't let her start hurting people again now that she's out, to which Charlotte responds, "Who's going to stop me? You?" And Mona says, "Yes."

Mona holds a bar to Charlotte's back as she's just centimetres away from the edge of the open window at the top of the steeple. "Jump. Jump or I'll push you," Mona says. Charlotte begs Mona not to push her. "Now you know what it's like to be really afraid," Mona says. "The way you made us feel. Say goodnight to the world, bully." Just when it looks like Mona is about to push Charlotte to her death, she instead throws her to the ground and threatens that she won't back down for what she put her and her friends through.

But Charlotte just couldn't stay quiet and says, "I knew you didn't have the guts." Then she grabs a piece of wood and swings it up to hit Mona. That starts a fight of epic proportion between to the two as they take turns hitting each other and wrestling around at the top of the church. "They'll never love you," Charlotte says calmly, probably implying the Liars will never accept her into the group. At separate points, both Charlotte and Mona look like they could win, but then Mona slams Charlotte up against the wooden wall. Little did either of them know that a nail was sticking out, and it goes through the back of Charlotte's neck, killing her almost instantly.

"The reason the police never found a murder weapon was because they were looking for something hidden," Mona tells the Liars. "It wasn't hidden, it was right there, all the time, in the steeple, waiting for Charlotte to come."