On this week's episode of Game of Thrones, the greatest moment may have been the resurrection of Jon Snow, but we also have to give it up for the OMG moment that is the flashback/vision of Bran Stark to a moment of his father's childhood back at Winterfell. Not only are we seeing something that very rarely happens on this show — a happy time — we are also seeing Ned as a child with his siblings, including a character we have heard a bit about but never really seen: Ned's sister, Lyanna. Though she's not a player in the series because she's dead before the events of the show take place, anyone who subcribes to one of Game of Thrones' biggest theories is familiar with her name. But if you're not familiar, let's go over the info we have from the books and the show, and why it's significant that we're "meeting" her now. 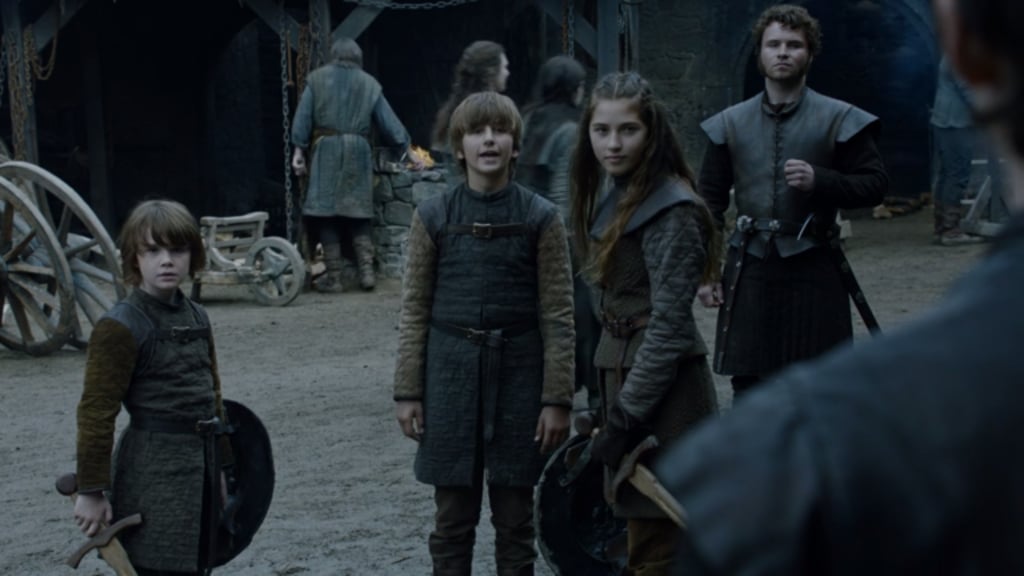 Lyanna Was Ned's Only Sister

In the opening scene this week, Bran uses his greensight to visit a day in the life of the Winterfell kids, one generation before him. There's his father, Ned, older brother Brandon, younger brother Benjen, and the only girl: Lyanna. This is the most the show has revealed about a young Lyanna (and the first time she's had a face). Seen on horseback, she seems to have a lot on common with Arya; she's no handmaiden, hidden away inside learning to be a young lady. Even so, we know that she blossomed into one of the most eligible bachelorettes of her generation.

She Was Promised to Robert Baratheon, Who Started a War When She Was Kidnapped

Lyanna's engagement and subsequent kidnapping are legendary in Westeros. She was engaged to Robert Baratheon, who is pretty open about the fact that he never got over her, revealing how heartbroken he is in Lyanna's tomb below Winterfell in the series premiere. (And later, to his wife, Cersei. Ouch.)

The story goes that while Robert and Lyanna were engaged, Rhaegar Targaryen (an older brother of Daenerys who was dead before the show began) kidnapped her, inciting Robert's Rebellion when the "Mad King," Aerys Targaryen, refused to see his own son to justice. "Robert started a war to win her back. He killed Rhaegar, but she died anyway," Bran Stark says in season one, filling us in on the story. In season five, Sansa Stark reveals the world's perception of what happened: "Yes, he chose her, and then he kidnapped her and raped her." Indeed, Rhaegar being married to someone else and making off with Lyanna wasn't just quite the scandal — it's an event that still has reverberations in the Game of Thrones universe today.

There's a Theory That Lyanna Had a Child Before She Died

Ned Stark was Robert's right-hand man, and as such, he was with him during Robert's Rebellion (and also because he obviously wanted to save his sister). It's Ned who finds Lyanna after the final battle of the rebellion, in the Tower of Joy. She dies there, but it's never revealed how, and her last words to her brother are, "Promise me, Ned." That's it, and like Sansa says later, Ned never liked to talk about her death. From that incident and those words grew the most significant theory in Game of Thrones geneology.

The widely held theory basically states that Jon Snow is the illegitimate son of Lyanna and Rhaegar, and that Lyanna died in childbirth. The promise may have been that Ned would never tell people Lyanna's secret, or it could be a promise to always protect Jon. Remember how, before Ned leaves for King's Landing in season one, he tells Jon they'll talk about his mother when he gets back, but then conveniently dies before he can? This question is going to get answered, which brings me to my next point about . . .

So, Why Show Lyanna Now?

What an interesting scene to show Bran Stark, in the same episode where Jon Snow, after being murdered by his brothers in the Night's Watch, is brought back to life. The fact that Jon has been brought back probably means there is something special about him — like he's fulfilling a prophecy, maybe, or maybe that Targaryen blood is more magical than we ever thought.

Either way, look forward to more being revealed about Lyanna, since the preview for next week's episode might reveal a flashback to the battle at the Tower of Joy. (Fast-forward to the end to see what may be a young Ned Stark saying, "Now it ends.")