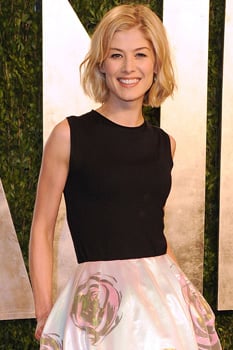 Spread the word: Rosamund Pike will play Amy Dunne in Gone Girl! We've been speculating as to who would nab the lead roles in the adaptation of Gillian Flynn's bestselling novel since rumors began to swirl that there might be a movie, and we finally know who will play the leads. Recently we learned Ben Affleck is starring as Nick Dunne, and this week we got confirmation that Pike has been offered (and will likely accept) the role of Nick's missing wife, Amy.

It goes without saying that with David Fincher on board to direct and a rabid fan base hoping to see an accurate adaptation, this is a huge role. Names like Natalie Portman, Reese Witherspoon (who is producing), and Emily Blunt had all been brought up — we even had our own list of possibilities — so it's relatively surprising that Pike earned the role. If you're still scratching your head as to who the petite blonde is, here are some things to know about the new Mrs. Amy Dunne.

Find out more when you read more.

Image Source: Getty
Rosamund Pike Has Been Cast in Gone Girl: 5 Things You Should Know About Her  originally posted on POPSUGAR Entertainment News
Around The Web