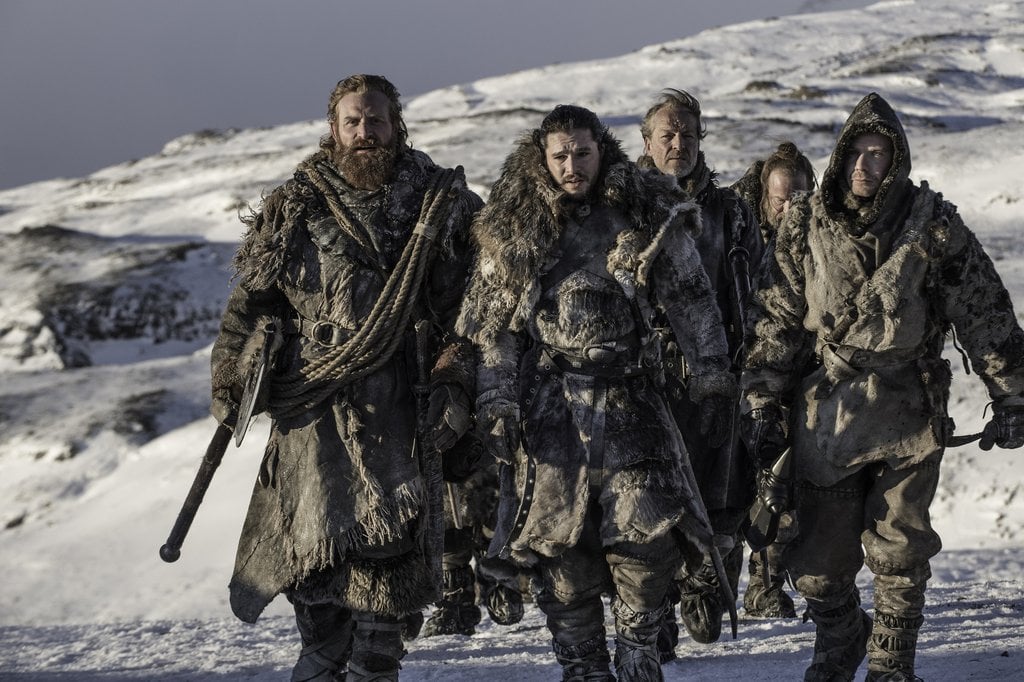 Before I watched season seven of Game of Thrones, the complaint of "it's too unrealistic" always made me angry. It's a fantasy show about dragons! And face-swapping assassins! And twins who occasionally like to get it on! If any show needs a suspension of disbelief, it's this one. Then . . . I watched season seven.

Although I thoroughly enjoyed the breakneck speed of the thrilling seven episodes, it was hard not to notice how many egregiously unrealistic liberties the plot took in order to keep things moving now that the episode count is lower than ever. Few times were the plot holes more glaring than in the season's sixth episode, "Beyond the Wall," when Jon Snow and the gang go toe to toe with the Night King and his massive army in order to steal a wight.

The plan, which Tyrion dreams up as a way to convince Cersei to call a truce with Jon and Daenerys, is certifiably insane. Why do they just charge up there with such a small group when they've personally laid eyes on the enormous undead army before? Why don't they ask Daenerys to fly them up to Eastwatch and be nearby just in case things go south? While the good folks at HBO decided to ignore these questions, YouTube user Media Muse was kind enough to share the one slight change that could have made this whole plot much more believable.

Everything about the "let's go kidnap a frozen zombie" plan would have made sense if it had been Cersei's idea all along. Imagine if Jaime and Bronn had actually been captured after Dany fries the Lannister army in episode four, "The Spoils of War." Cersei would have had to bargain for the prisoners' release with Tyrion, a conversation in which he'd no doubt try to negotiate a truce (like he eventually does in the finale).

As her terms for a truce, Cersei could have asked that Jon bring her proof that the threat beyond the Wall is legit. Then, he and his merry band of misfits would have still gone north on the dangerous mission to capture the wight, but with the knowledge that their actions would lead to a definite truce (rather than hoping that the appearance of a wight would sway her later on). The sacrifices they make — Viserion's brutal death, losing Thoros of Myr, etc. — would suddenly seem far less foolish.

As we all know, none of that ends up happening. A Game of Thrones fan can still dream, though!