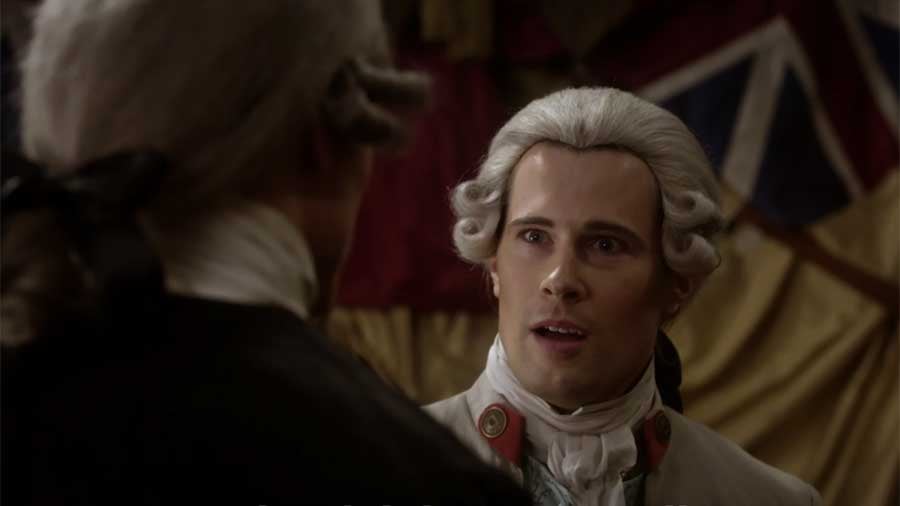 Outlander has introduced a pivotal character to the entire series in season three: Lord John Grey. He starts out as an adversary, but quickly becomes one of Jamie's closest friends and even the de facto father to Jamie's son, William. However, the third season has had to do some major paring down of the book Voyager, and one of the things that has been significantly changed and condensed is Lord John meeting Claire on the Porpoise and the subsequent meeting between all three of them at the governor's ball.

In the book, Lord John is a special passenger on the Porpoise and meets Claire while she is there tending to the sick men — though neither one of them realises who the other person is. Then later at the governor's ball, Jamie and Lord John have a heartfelt reunion, which completely blindsides Claire, both because she realises Lord John is in love with her husband, but also because this is where she learns about Willie, whom she didn't know existed at this point. As all of this comes out, Claire and Lord John have some quite testy conversations with each other (sans Jamie) and grudgingly admit that they liked each other when they met on the Porpoise (the unspoken part being that they no longer do).

On the show, I actually prefer the way they handle this whole storyline now that I've seen the governor's ball. It lets Jamie and Lord John still have their heartfelt reunion, with the most astonished-then-joyful expressions and also some rather longing looks on John's part. But with Claire already knowing about Willie and therefore being aware of Lord John (at least in part), she keeps her wits about her a little better here and that feels more "Claire" to me. 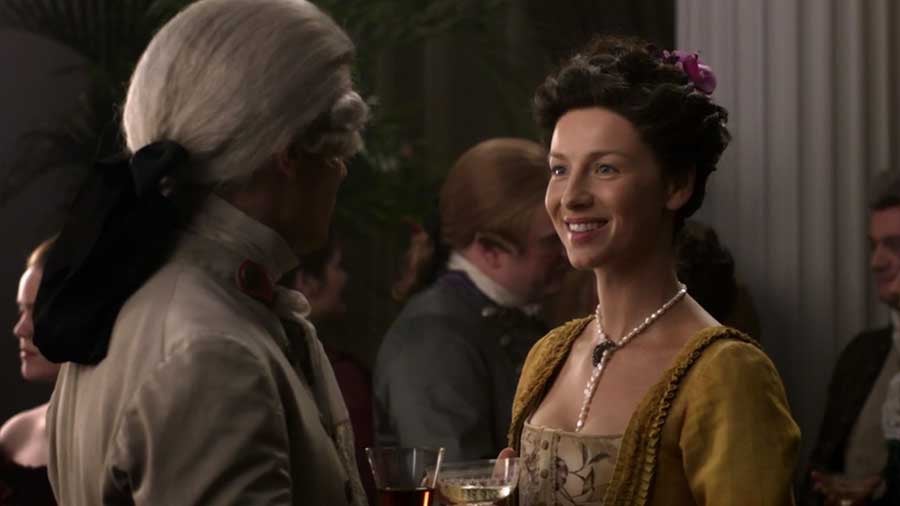 Caitriona Balfe does a masterful job conveying Claire figuring out the nature of Jamie and John's relationship with merely a couple of glances. It doesn't mean she isn't just a tad bit jealous of this man who obviously means so much to her husband. The thoughts are streaming across her face, particularly when she learns that Jamie gave John a sapphire and John now wears it as an ornament on his vest as a way of "remembering their friendship."

Mmmm hmmm, Claire seems to be thinking. Jamie explains that he didn't so much "give" John a sapphire as he did "surrender" it to the warden of his prison, but Claire still knows which way the wind is blowing as far as this relationship goes.

Related:
Why Outlander Cut Basically Everything About Lord John's Lover

Warning: spoilers from the books ahead, so stop reading if you don't want to be spoiled.

The whole interaction between the three of them actually makes me really excited to get to the point in the books where John and Claire think Jamie has been lost at sea and marry each other (as a way for Lord John to protect Claire from being arrested as a spy). David Berry and Balfe have a nice chemistry together, as do Berry and Sam Heughan, so that should be a lot of fun for us viewers if the show gets that far, especially when Jamie returns and learns that John and Claire are married (and have been intimate), which he has a hard time accepting.

So, well done to Outlander this season on all the Lord John events. It's handled it very well, especially considering how much overall material it had to fit into 13 episodes.