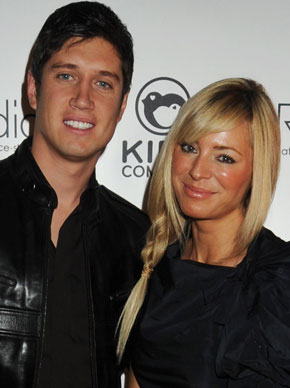 Vernon Kay has admitted sending explicit and flirtatious texts to a glamour model and four other girls behind his wife Tess Daly's back.

In an interview with The Sun today Vernon said:

"Tess is extremely upset about this and we're working through it. But in some ways I'm glad this story has come out. It feels like a weight has been lifted off my shoulders... I'm never going to do it again and hopefully I can clear the slate clean and start again. I'm so sorry. I've been an idiot and I've let my family down.... I've only done this with four or five girls and I've known them all well — they've been friends or work colleagues... I know a single guy can get away with things like that but I'm married and I understand this is off limits... I thought it was harmless banter and just larking around. Part of me says [Tess] was suspicious on a couple of occasions. I think she may have seen some of the more harmless ones. I did think I should be careful but you don't think it will escalate. I've got the most beautiful family and I'm embarrassed I've put them through this. I'll do whatever it takes to resolve the situation. I'm so sorry."

Rhian Sugden was one of the recipients of the messages, saying, "I met Vernon in a club in Bolton and we have exchanged a few racy texts." He also used Twitter and Skype to exchange messages with the women. With two kids and a seemingly happy marriage, are you surprised by this revelation from Vernon?