Director Kathryn Bigelow has taken on the mighty task of turning the takedown of Osama bin Laden into a feature film, and the first full trailer for Zero Dark Thirty has my heart skipping beats. We already got to see glimpses of stars Jessica Chastain and Kyle Chandler in the film's teaser but this preview gives a better idea of the story. It's definitely going to revolve around the covert operation, but it appears to be giving a more human look at the troops and agents involved, including the emotional toll it takes to be a part of such a massively secretive and dangerous mission. 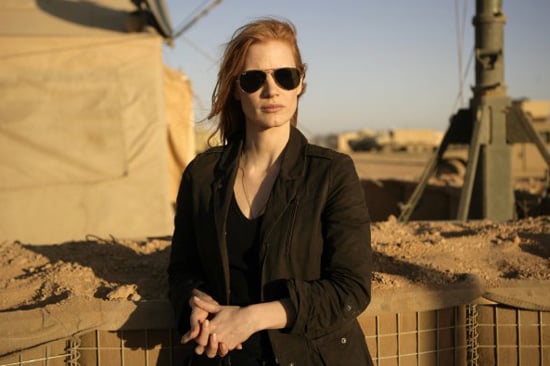 The trailer briefly introduces us to some of the supporting players, including Chris Pratt, Joel Edgerton, and The Vampire Diaries' Taylor Kinney, but this seems to be Chastain's movie. We don't actually hear her speak in the trailer, but we see her with her head in her hands, a voiceover clarifying, "There is just us, and we are failing."The part that has me on the edge of my seat is the final frame, showing a night-vision shot of the special unit surrounding a compound. The movie is set for a Dec. 19 release, but until then, you can watch the trailer after the jump.

The Twilight Saga
Taylor Swift Almost Appeared in "Twilight: New Moon," but She Was Rejected Due to Her Star Status
by Njera Perkins 20 hours ago

Entertainment News
Johnny Depp to Direct "Modigliani" Biopic, His First Return Behind the Camera in 25 Years
by Njera Perkins 2 days ago