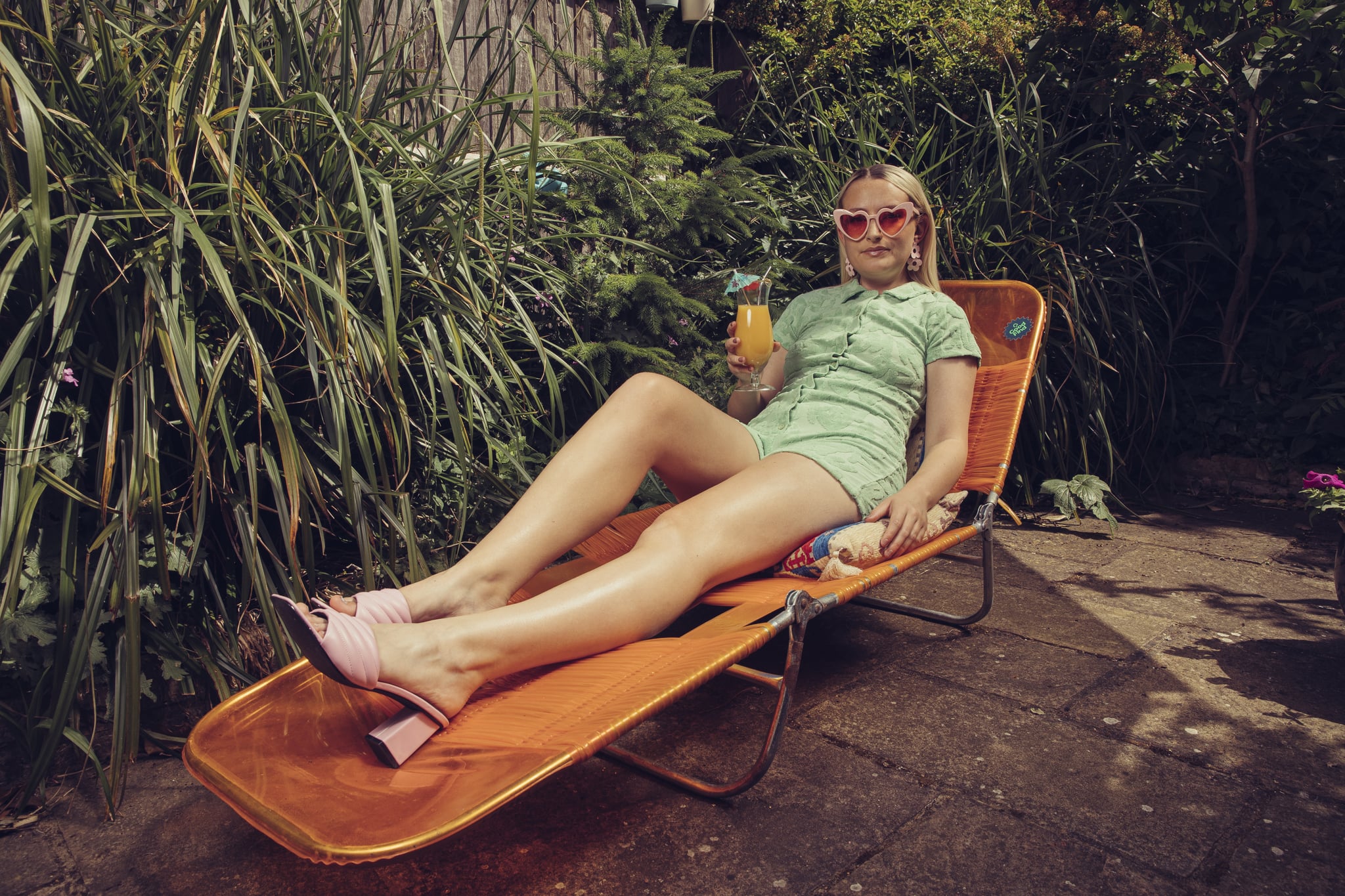 During lockdown, many of us found ourselves purchasing bizarre items to make the many days and nights that we spent indoors more manageable. We baked banana bread, we turned our homes into themed club nights, and we bought copious amounts of wax to try to replicate those female body candles that have done the rounds. What we didn't realise though, was that lockdown would indeed end, and we'd be left with the remnants of the baking, the club nights, and the (many) failed attempts at candle-making. Soon, we would run out of space to store it all. That's where Chicken Shop Date's Amelia Dimoldenberg comes in. She's been hired by Gumtree to be their resident "hype girl," helping the nation get rid of all the items they bought during lockdown. We caught up with Dimoldenberg to get the lowdown on lockdown, working with Gumtree, and to find out whether or not Marie Kondo has a future on Chicken Shop Date.

In the last year, Dimoldenberg ended up (much like the rest of the nation) buying large amounts of items that she absolutely did not need. "I bought loads, because the thrill of having the delivery guy come to your door was just the only exciting thing that happened," she told POPSUGAR, adding that the strangest thing she bought was "a chicken egg basket". Naturally, this prompted more questions on our end, and Dimoldenberg divulged more of her bizarre lockdown purchases, including Scottie dog salt and pepper shakers, a Toy Story mug, and an old pub mirror that says the words "old Scotch whiskey" (despite the fact that she does not drink whiskey). It's an impressive, albeit random, collection, we must admit. 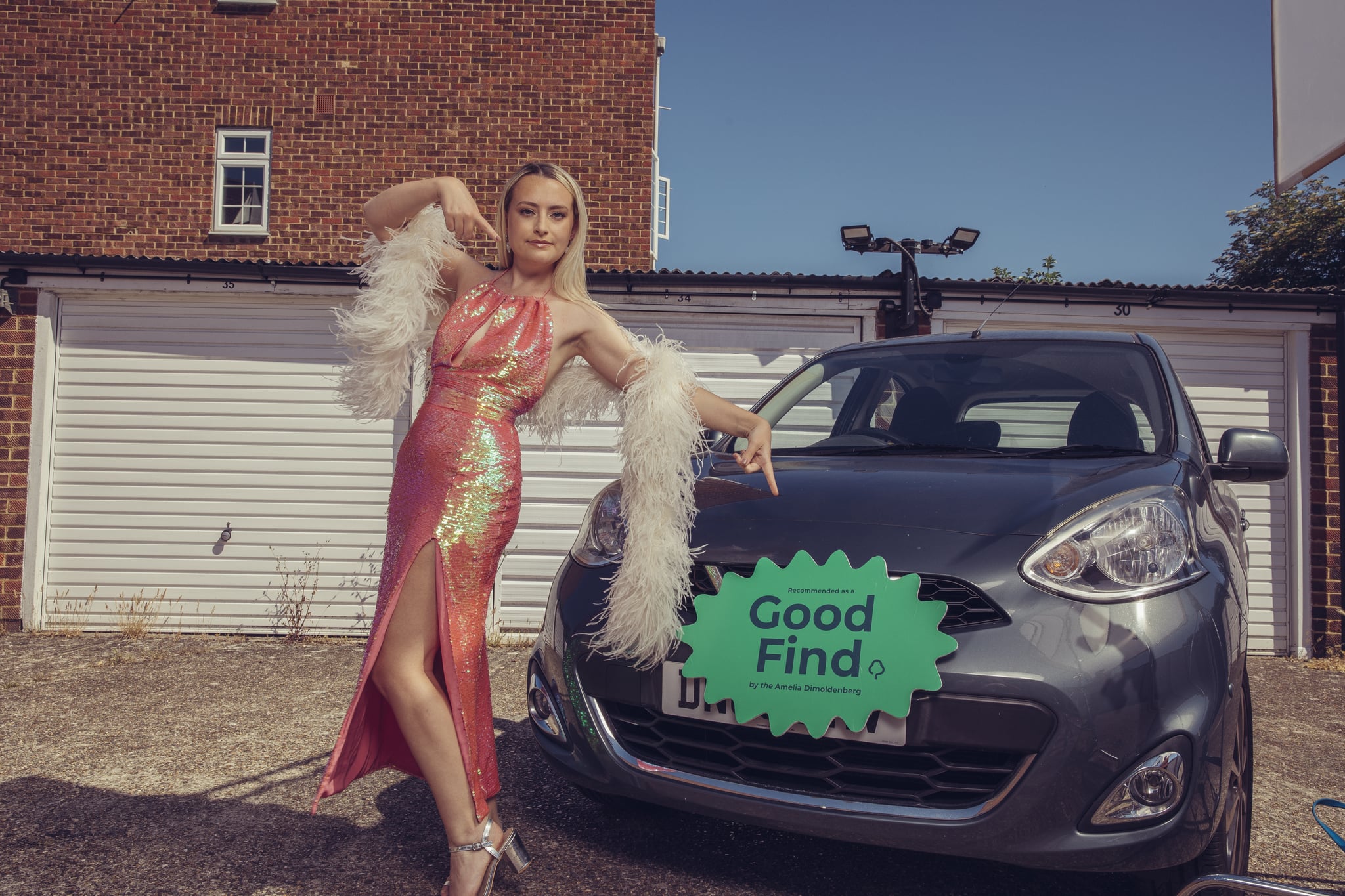 Dimoldenberg's shop of choice to purchase these bizarre items is, of course, Gumtree, explaining that it's because "you get trinkets that you would never really find elsewhere, things that people own or things that have been passed down through the family." She also shared that there's a particularly good flea market in Kempton that she's been meaning to visit, but it's one that's reserved for early birds as it kicks off at around 5 a.m. We can see why she might not have had a chance to go yet.

The idea of getting rid of things is something that many of us were drawn to during lockdown, because in some way it helped us to feel like we were being productive, and making use of the supposed extra time. As evidenced in her hype girl video for Gumtree, Dimoldenberg's tips for selling unwanted goods are as follows: "everything looks good when you've got a feather boa to shimmy in front of it" and "[you need] a lot of jazz hands." Noted. The comedian believes that "there is something so liberating about decluttering your life. Even though I do have my trinkets and stuff, I don't keep a lot of things and I don't have that many things in the house. I'm all for letting things go because I do think it's so good for your mind not to have cupboards and cupboards of things everywhere." She also told us that both her mum and sister are librarians, which understandably helps to keep her and her space more organised than the average person. 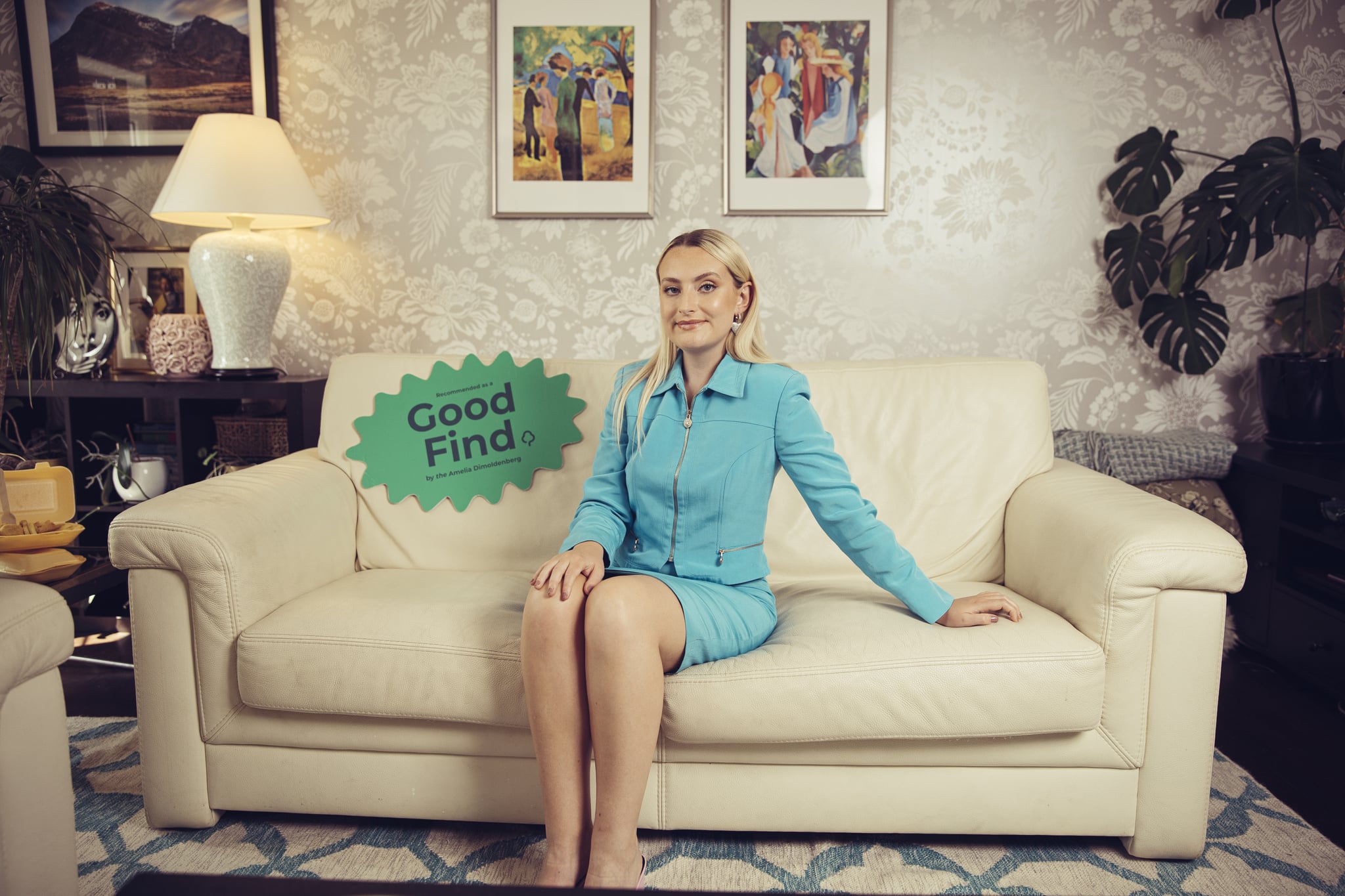 You can't talk about decluttering your life and keeping things tidy without mentioning Marie Kondo. Dimoldenberg admitted that she is a fan of Kondo and her methods, explaining that "I'm a quite tidy person I would say, so yeah I'm into her." That said, when it comes to the idea of having Kondo on the next episode of Chicken Shop Date, the comedian wasn't so sure. "I feel like she might stress out a bit with all of the different condiments that are up there. All of the different burger sauces and the chilli sauce, and sometimes the chilli sauce is actually in the burger sauce bottle and you never know what's going on. There's salt everywhere. She might get a bit jittery about that, and she also seems quite quiet and reserved. To be honest, there are other people I would put before her to come on the show," she said. In terms of who she would like to eat with at the chicken shop, at the top of Dimoldenberg's list is England player Jack Grealish, so regardless of whether or not football comes home, we sincerely hope that Grealish does.

In terms of Dimoldenberg's future plans, outside of a nationwide clear-out and eating fried chicken with an England player, she's working on a brand new YouTube series called Who Cares?, with comedy channel Dave. "I love this series because it's so different to Chicken Shop Date. I'm going out on the street and asking the public questions on a whole range of different topics — billionaires was the first episode, then cancel culture and the housing crisis," she explained. The series is filmed in a vox-pops style, and Dimoldenberg said that "there's just something so beautiful about the fact that you just never know what people are going to say and you just are so taken off guard. It's about the host in a way, but it's actually about just everyday people. Especially with subjects like current affairs and politics, I wanted the show not to just to be about my opinion or me preaching, but I wanted to hear what people actually had to say. This is actually what people do think away from the Twitter sphere."

Each part of the series so far has resulted in interesting conversations, divisive feedback, and some surprising revelations, particularly the first episode about cancel culture. Dimoldenberg said that "when you're on Twitter, [the idea of] cancel culture just feels so overwhelming, but I was going around asking everyone if they have been cancelled or if they worry about being cancelled and they're like, 'no, I've actually got real, other problems that I care about.'" When asked if she worries about being cancelled herself, Dimoldenberg said that "I used to, but I think the episode shows that there are positives to cancel culture in terms of holding people accountable for what they've done. It's a process of learning from your mistakes and educating yourself and others and growing from those things. I have a lot of responsibility of what I say and I think through things before I say them, or before I do anything. All my content, I make sure that it's respectful, interesting, and giving something to someone that they maybe haven't had before."

Watch Amelia Dimoldenberg in action for Gumtree below.