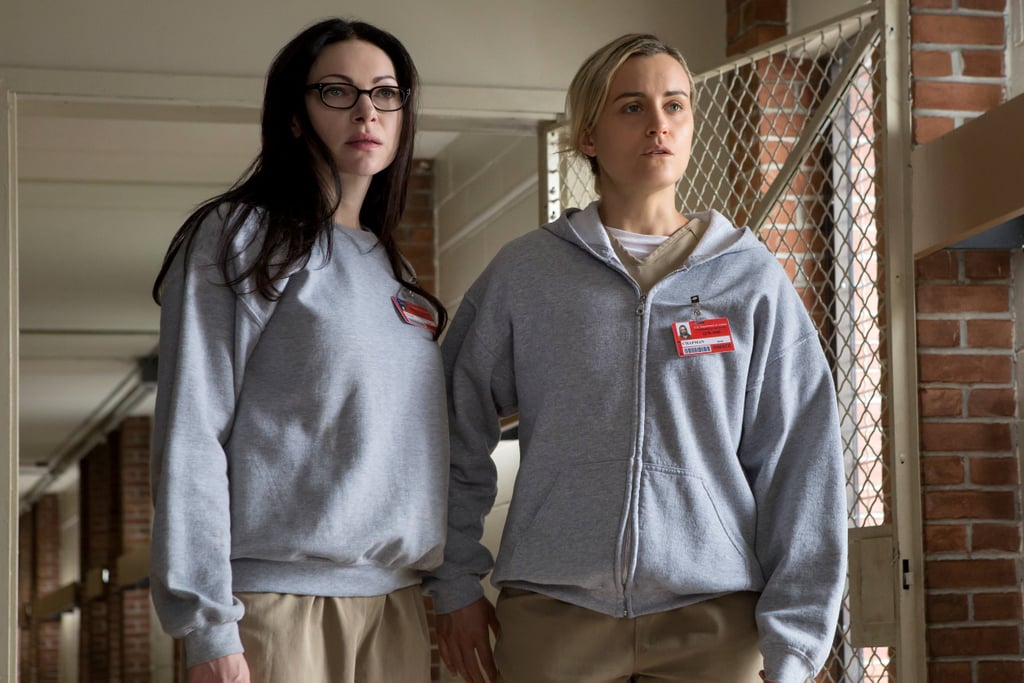 It's hard to imagine Litchfield life without Alex and Piper, but Orange Is the New Black fans were forced to fear the worst when Laura Prepon's character was noticeably absent from the show's intense season six trailer. Before we dive into our hopelessly romantic thoughts for the upcoming season, let's discuss what happened the last time we saw our girls at the end of season five.

Before the season-long riot comes to an end and the women of Litchfield are forced to separate, Piper Elizabeth Chapman (Taylor Schilling) proposes to Alex Pearl Vause (Prepon) with a can of baked beans while hiding out in Frieda's bunker. Piper's proposal speech is incredibly sweet, and it's the uplifting moment the women need during a dark few days. But the fate of their relationship is in question once officials raid the bunker and the group is separated.

Related:
Set Your Alarms: This Is Exactly When Orange Is the New Black Season 6 Will Release on Netflix

Fast forward to the trailer for season six, and it appears that Piper is without her partner in crime (too soon?) and can be heard asking someone, "Where is Alex?" Fans immediately took to Twitter, freaking out for our locked-up lovebirds and wondering why she wasn't in the trailer. So, we did some research, and are staying hopeful for the couple for a few reasons. Not only did Prepon post on Instagram multiple times from the set of season six, but her IMDb page lists multiple episodes in the upcoming season where she'll appear. Obviously we don't know if these are flashbacks or present scenes, but count on series creator Jenji Kohan to keep us guessing. (Dare we bring up the fact that in season four, Alex kills the fake guard sent by her former boss and drug lord, while Lolly confesses to the crime when the body was found? Yeah, we'd rather not. However, we do see Lolly again in the trailer.)

It's also worth noting that Prepon was pregnant during the time of filming, which might explain a smaller role in season six. (Although we totally support a story line that incorporates Prepon's real-life pregnancy in the show, regardless of prison health care budget concerns.) If you freaked out upon realising Alex was absent from the trailer, you are not alone. Read on to see the screaming reactions, and then, check out the first photos from OITNB season six.

Related:
Why Every Orange Is the New Black Inmate Is in Prison
Previous Next Start Slideshow
NetflixTwitter ReactionsOrange Is The New BlackLaura PreponTV
Around The Web