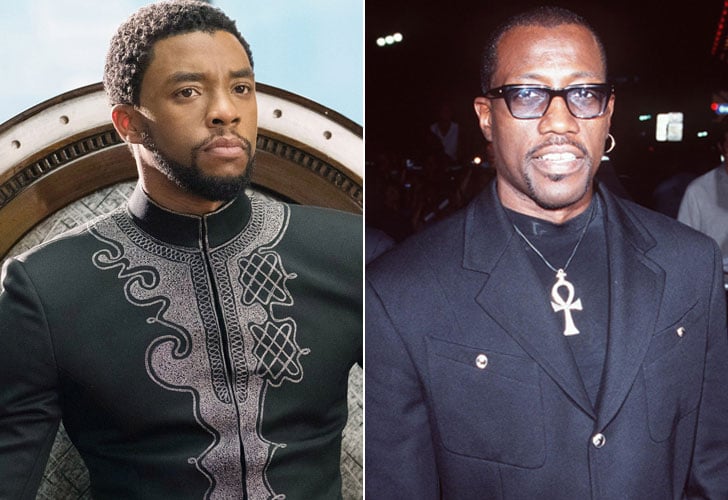 Black Panther is no longer just a movie — it's basically a worldwide phenomenon. Marvel's latest superhero film has not only demolished box office records all over the globe, but it's also already earning 2019 Oscar buzz. This is in no small part due to the incredibly talented cast that brings the story of T'Challa and Wakanda to life. But what if Chadwick Boseman didn't play the titular hero? And Lupita Nyong'o wasn't given the role of Nakia, or Danai Gurira didn't appear as Okoye? It's impossible to imagine. But that's exactly what Twitter has been up to recently, for one pretty entertaining reason.

On April 3, one Twitter user imagined who might be in Black Panther if it had been released in the '90s. In this case they volunteered Chocolate City actor Michael Jai White as fan-favourite M'Baku, the role made popular in the film by Winston Duke.

Wow we actually need this

After that the tweets came pouring in, with suggestions for Wesley Snipes to play T'Challa, Tom Hanks to play Agent Ross, Halle Berry to play Nakia, and so, so many more. Check them out below.

Grace Jones would have been okoye

Bokeem Woodbine as any of the damn male characters from the hero to the villain to a henchman...90s was a strange time this mofo was in errything #90sBlackPanther pic.twitter.com/2TEy2rqkk2

And Patrick Swayze as Klaw

Jamie Foxx wouldve played killmonger in the mid 2000s. I can't be the only one that felt him in Michael's performance https://t.co/O3fYpHF8hp

Of course, now that Black Panther has been given a '90s makeover, what about the rest of the Marvel Cinematic Universe?