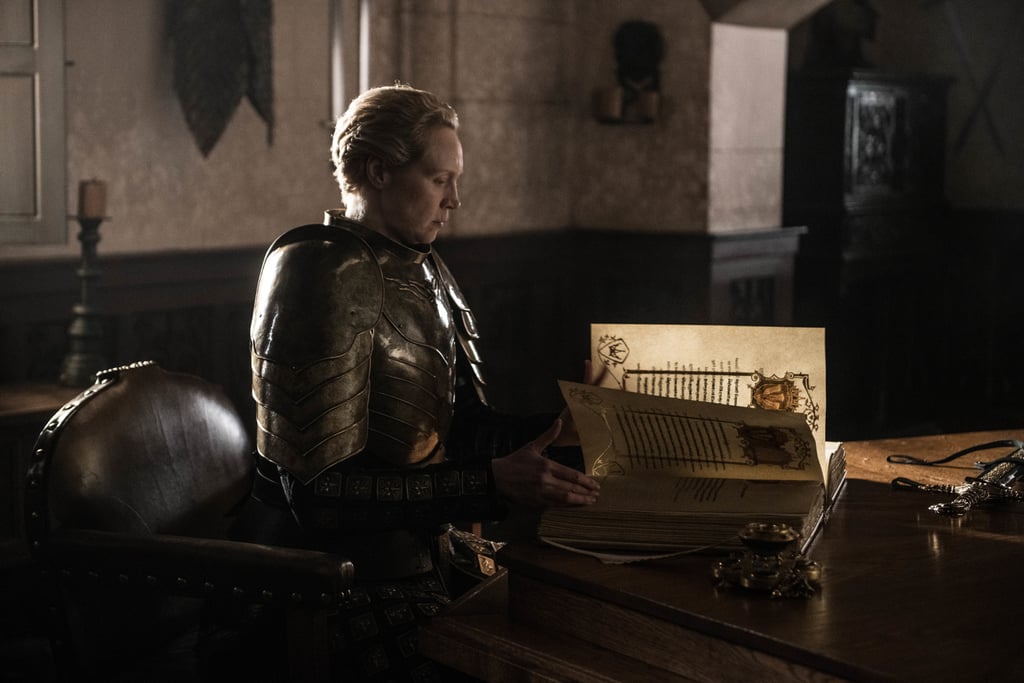 Warning: Game of Thrones spoilers ahead!

The final conversation Brienne of Tarth shares with Jaime Lannister may be tense, but in the end, she makes sure the man who made her a knight holds a place in history. During the Game of Thrones series finale, Brienne takes a moment to honour Jaime by recording his deeds in The Book of Brothers, which is filled with the deeds of every knight who served in the Kingsguard. The last item on the list? "Died protecting his queen." Well, that's certainly one way to put it.

On the one hand, considering the pair's long and complicated history, it's fitting that Brienne is the one to record Jaime's deeds. He goes from being the prisoner she's sworn to escort to, years later, knighting her. They fight beside each other on the battlefield, she falls in love with him, they sleep together, and then . . . well, then he leaves her to be with Cersei. It's because of that final, emotional goodbye in particular than some people wouldn't have minded Brienne going full Mean Girls on Jaime, turning The Book of Brothers into The Burn Book. He leaves her! After all that!

Still, to me, it feels right that Jaime Lannister gets a final nod. It's as if, after watching him die with his arms wrapped around Cersei, I needed someone — anyone — to acknowledge him one last time, like, "Yeah, things are complicated, but he was a pretty damn good character, right?" Plus, Brienne's tribute offers a nice callback to a moment Jaime shares Joffrey in season four. As they discuss Joffrey's standing with the people, Joffrey starts pageing through the book that's sitting on the table, saying, "So this is the famous Book of Brothers? All the great deeds of all the great Kingsguard, huh?" He goes on to list the accomplishments of a few knights, eventually landing on Jaime's page and laughing. "Someone forgot to write down all your great deeds," Joffrey jokes, and Jaime says, "There's still time."

Whether you love Brienne's last tribute to Jaime Lannister or you hate it, keep reading to take a look at fans' mixed reactions, then relive the most memorable moments from the show's epic series finale.

Related:
The Meaning Behind Drogon's Fiery Symbolic Gesture in the Game of Thrones Finale
Previous Next Start Slideshow
Twitter ReactionsGame Of ThronesTV