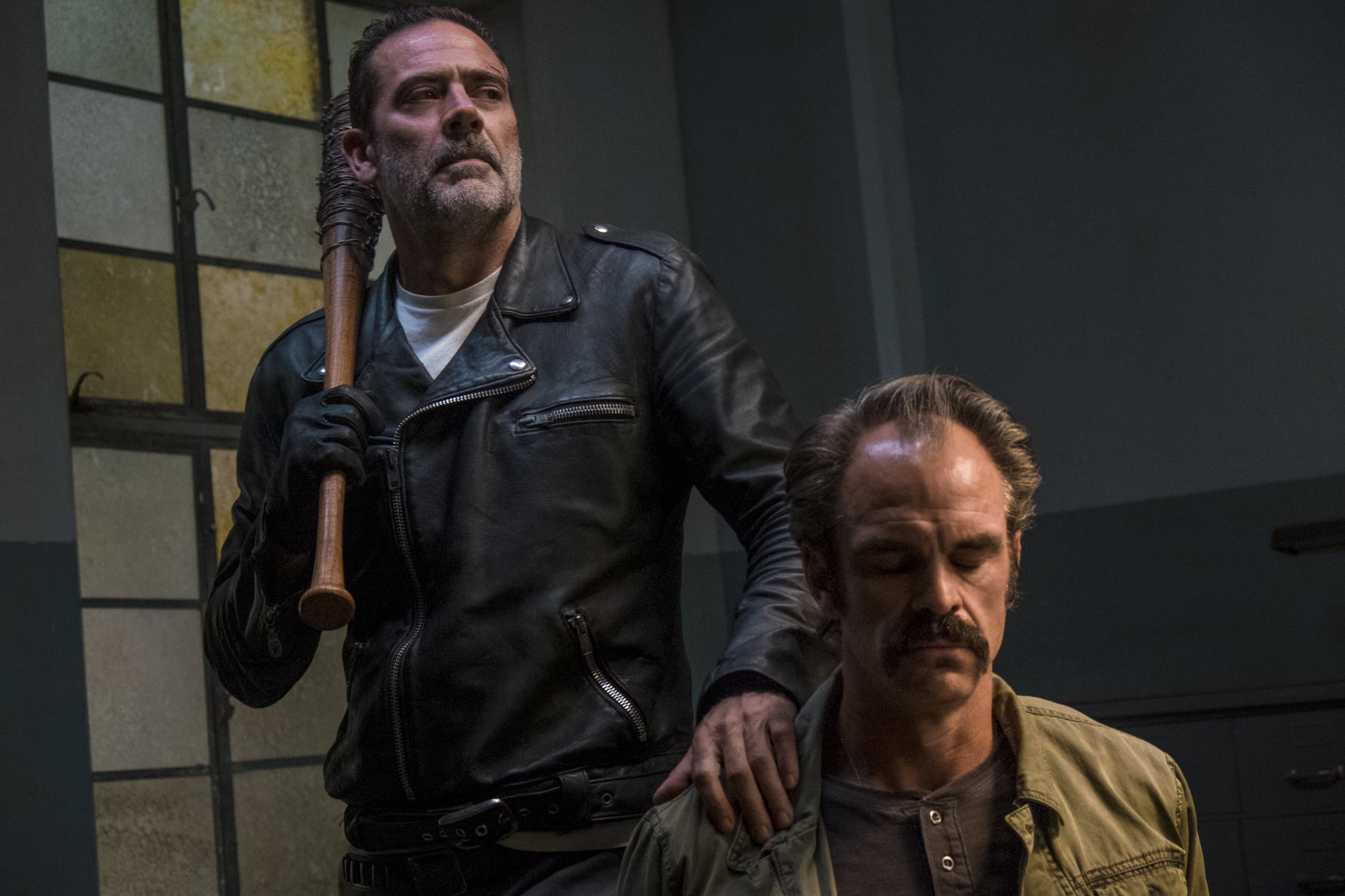 Spoilers for the latest episode of The Walking Dead below!

Leave it to The Walking Dead to have us feeling emotional one second, and peeking through our fingers in fear the next. In the AMC zombie drama's latest episode, "Worth," we're treated to everything from a bittersweet reading of Carl's letter to Rick to the gruesome death of yet another relatively major character. We can't say we shed many tears this time around, but we will admit that the show has lost one of the few remaining members of the Saviors who kept our interest week after week.

Negan's mustachioed right-hand man, Simon (Steven Ogg), has been one of the most conniving thorns in the side of Rick and the rest of the Alexandria and Hill Top communities, managing to pop up at just the right moments to create chaos. That's also probably why Negan loves him — er loved him — so much. In "Worth," we finally get to see the brutal conclusion to Negan and Simon's relationship, and it isn't pretty.

Earlier on in the episode, Simon establishes himself as the new Negan now that the former leader is presumably out of the picture. Of course it doesn't take long for Negan to reappear in dramatic fashion, where he threatens Simon with Lucille. "I'm gonna need you on your knees," Negan says, before revealing he's just messing around. After all, Negan still needs Simon's help to plan a sniper attack on Hilltop.

Unfortunately Simon doesn't get the message. He invites Dwight and a few other people at the Sanctuary to a meeting to discuss him taking over the Saviors for real. With one Negan-like whistle, however, Dwight reveals that he's double-crossed Simon and brought Negan along as his guest to the mutiny party. With the exception of Simon and Gregory, the rest of the meetings' attendees are shot on the spot. Even though he realises Simon is trying to stab him in the back, it's Negan's respect for "that psychopath who went out and did that at Oceanside and wiped out everyone" that results in how he chooses to deal with him. Negan challenges Simon to a wrestling fight to the death for control of the Saviors, declaring, "You wanna be the man, you gotta beat the man."

At first it seems like Simon might have a chance thanks to a few solid punches, but of course Negan eventually takes control and crushes Simon's throat. Did you really think Negan would go down like that? By the time the episode wraps up, we see the bat happy leader observing a zombified Simon thrashing around on the Sanctuary's fence.

Despite Simon's annoying habit of trying to kill our heroes each Sunday, his death elicited quite the reaction from fans on Twitter. In honour of his death, take a look at the best ones below.

Simon when he sees Negan back at the Sanctuary #TheWalkingDead https://t.co/7V5ftZWuU1

Negan basically just confirmed that Simon was the original leader of the Saviors and that he killed the men of Oceanside! #TheWalkingDead

...and you thought you had a bad day? Simon forever holding up a pole.#TheWalkingDead pic.twitter.com/zj5Z7kjpx9

Simon done lost his mind and Negan is putting him in his place #thewalkingdead pic.twitter.com/oBuFbuG1By

My favourite scene in Black Panther is when Negan and Simon fight for the title of Black Panther #TheWalkingDead pic.twitter.com/CRNmXSeJf2

I feel so bad for Steven. You can tell he genuinely loves playing Simon and being on #TheWalkingDead.#TalkingDead

The Walking DeadTV
Around The Web