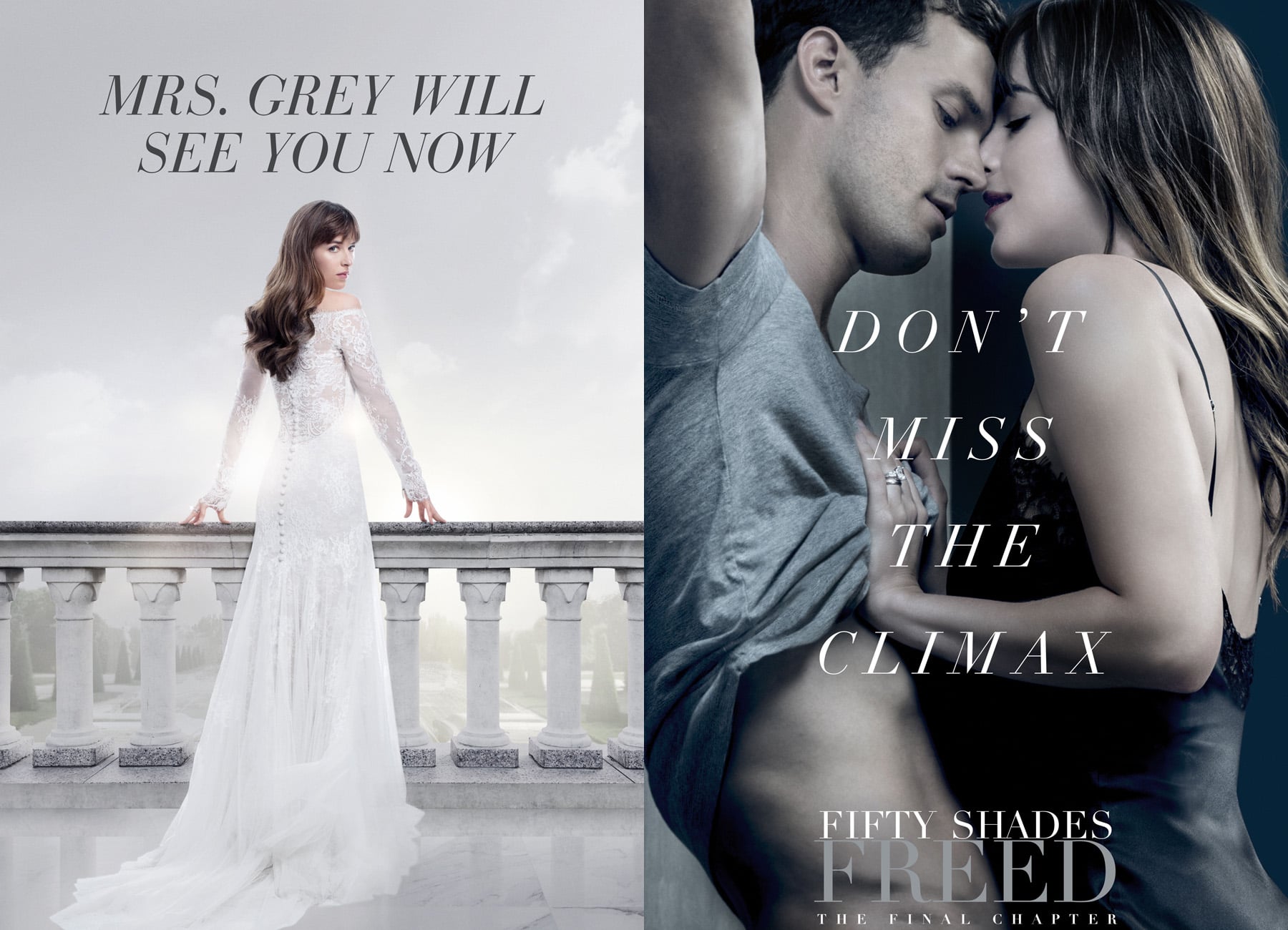 The Fifty Shades Freed posters have been teased out for months, boosted on social media feeds, and plastered on big billboards everywhere. As is par for the course, they are dark and sensual, but two things are particularly important to note: the tagline "Mrs. Grey Will See You Now," and Dakota Johnson and Jamie Dornan's positions. These details hearken back to to the original Fifty Shades of Grey posters that read "Mr. Grey Will See You" and display the infamous elevator scene where Christian Grey loses self-control and passionately kisses Anastasia Steele against the wall of the elevator.

The stark difference in posters is meant to show the transformation of Ana's character from a meek college student who's never really had a boyfriend before to a confident, emboldened woman who knows what she wants, isn't afraid to ask for it in the bedroom and boardroom, and can take charge of Christian like no one else (literally). As we see in the new film, she also puts architect Gia Matteo in her place when she tries to flirt with Christian. The new tagline and promotion behind "Mrs. Grey" seems to imply that things are now happening on Mrs. Grey's terms, rather than Mr. Grey's. At the very least, Mr. Grey's control and power will be challenged even more. 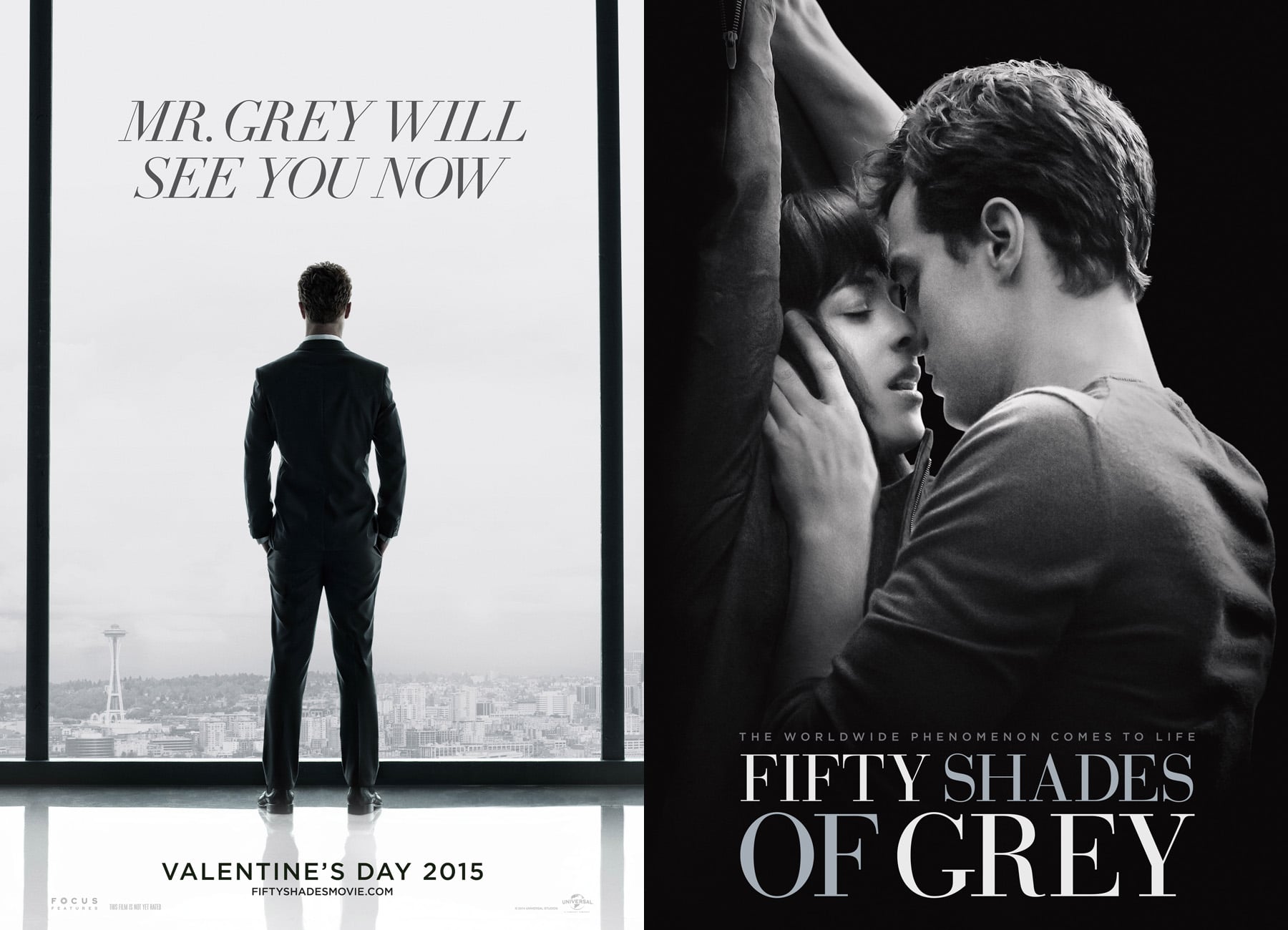 If you've read the books, you may recall that Christian has never liked being touched, especially after going through a traumatic experience as a child. But in an effort to show Ana that he's willing to change for her, he finally lets her touch him in Fifty Shades Darker, hence the reason why Ana looks so sure of herself as she drags his T-shirt up in the promotional poster.

Their stances, combined with the physical (and emotional) role reversal that now finds a more submissive Christian with his arms up is a good indicator of how empowered Ana becomes in the third installment of the series. Rather than waiting for direction from Christian or trying to mold herself into a version he likes, she is doing the seducing, deciding what kind of sex she wants from Christian and when. Not only is she a big shot at her job, but she doesn't let Christian dictate her lifestyle, pushing against his demands when he goes all dom on her outside the bedroom.

As seen in the official trailer of the movie, Ana tells Christian to learn to "live with" her defiance, suggesting that he could tie her up all he wants in his playroom, but all bets are off when they're outside of it.

While Christian puts in more protective measures in place because of their stalker, it is Ana who combats the situation head-on by meeting Jack Hyde, her former boss in a very dangerous situation.

In a recent interview, Dakota Johnson talked about Ana's evolution, saying, "Initially, one of the biggest draws to me was Anastasia's emotional, intellectual, and sexual arc over the course of three films," she said. "She grows into a fierce young woman who discovers that perhaps her sexual preferences are more similar to Christian Grey's than what she initially expected."

Through much of the series, Ana is trying to find her sexual footing and navigate her way around a relationship with a domineering man, but her experiences culminate in an installment that seeks to balance out the power dynamic a little bit more.

Mrs. Grey is here to stay, and we can't wait.