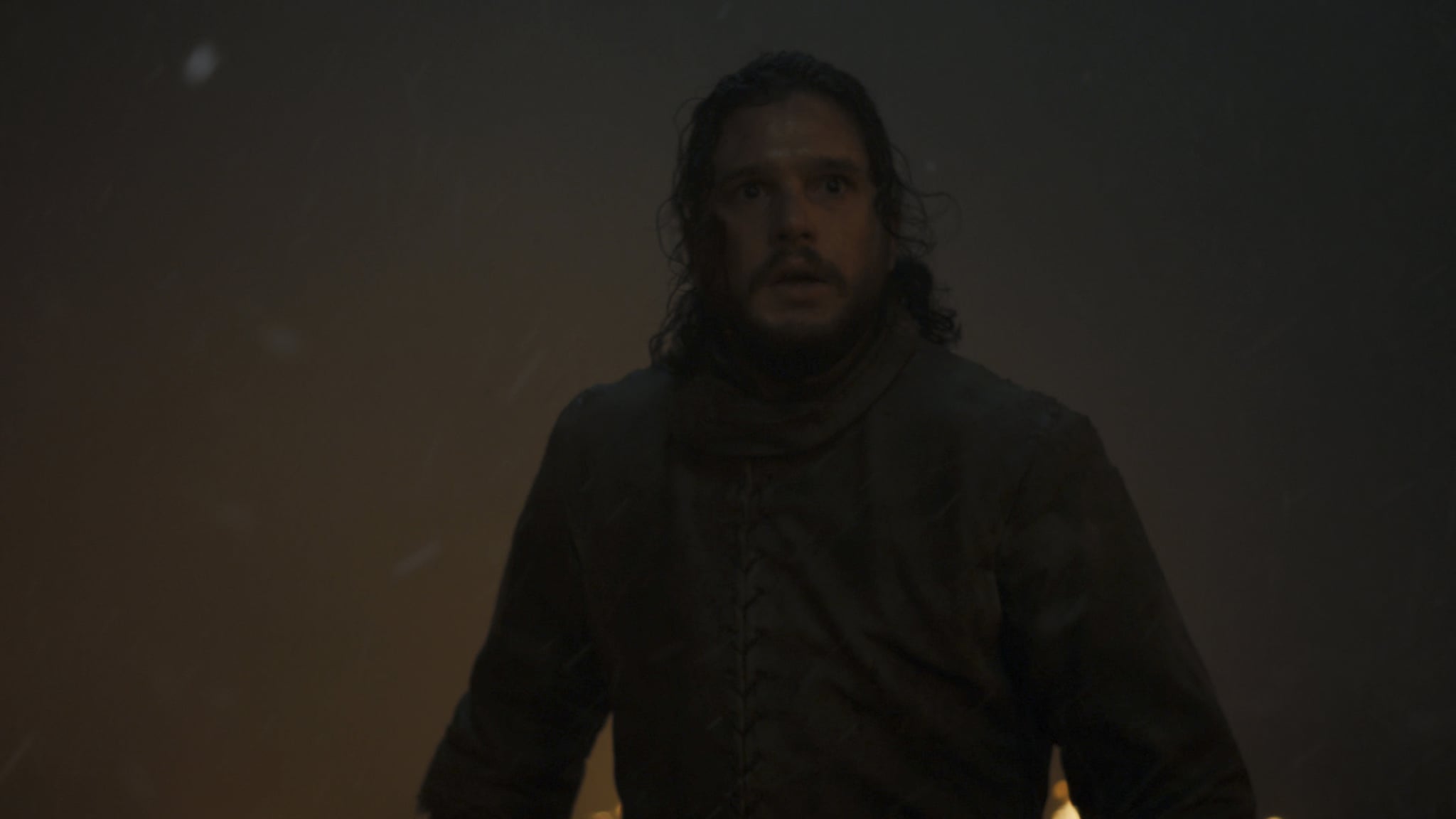 Warning: This article is comprised entirely of spoilers for Game of Thrones. Turn back now before it's too late!

Are you all okay out there? It's fair to say probably not, since Game of Thrones just took our hearts and crushed them into a fine powder. We finally got the great Battle of Winterfell and it was just as devastating as we thought it would be. Maybe even more so, considering the epically heartbreaking death of several faves.

If you're feeling a little too tender to remember exactly what happened, we've rounded up the five biggest moments from "The Long Night" ahead. Brace yourself, it's going to get rough.

Related:
Wondering Who Dies in the Battle of Winterfell? Here's a Handy, Heartbreaking Guide

The Red Witch Returns to Winterfell

Before the battle officially begins, a lone rider emerges from the shadows to arrive at the front lines. It's the Red Witch herself, Melisandre. She asks Jorah to instruct the Dorthraki to lift their swords and when they do, she places her hand on the nearest one and sets the scores of Dorthraki blades aflame. As she makes her way into Winterfell for safety, she's allowed entry by Daavos. "There's no need to execute me," she says to him. "I'll be dead before the dawn." She exchanges an intense look with Arya (who still has her name written down On her kill list for taking Gendry away) before the battle begins in earnest. Later on, when Dany and Jon fail to notice the signal from Daavos to light the trench to trap the wights, Melisandre (literally) works her magic once again to light them herself.

In the thick of battle, Arya and the Hound are being chased by wights, and run into a room occupied by the witch. Arya notes that she remembers Melisandre said they'd meet again and that Arya would "shut many eyes." The witch nods and adds, "Brown eyes, green eyes . . . and blue eyes." Then she reminds Arya, "What do we say to the god of death?" Arya, who had been visibly shaken from being chased by wights, looks renewed and replies. "Not today." The next and last time we see Melisandre is right before the dawn, when the battle is freshly over. She walks out into the snow, removes her necklace, and her body slowly deteriorates as it rapidly ages.

The Battle of Winterfell Claims the Lives of Many

From the very beginning, the Battle of Winterfell is a slaughter. The Dortharki are the first to be cut down as the wights rip through their defences. The combined forces of the North and the Unsullied attempt to fold the castle, but are quickly overwhelmed by the massive horde of wights the Night King has collected during his march north. Jon and Daenerys watch from afar as they wait for the Night King to make an appearance, but Daenerys breaks away when she sees that Jorah is injured, telling Jon that the "dead are already here," when he tries to remind her of their mission. The two have their dragons breathe fire onto the battlefield as the living and the dead go head-to-head. Despite their efforts, it's obvious that the dead are gaining ground and Jon and Daenerys get caught up in what looks like a magical blizzard windstorm.

With their dragon reinforcements preoccupied by the windstorm and the wights gaining ground, Brienne calls for everyone to fall back and the soldiers run for Winterfell. After ensuring that Sansa secures herself in the crypt (with a dragonglass dagger and advice to "stick them with the pointy end") Arya begins kicking undead ass with the weapon Gendry created for her. When she's thrown into a wall, she scrabbles off a nearby roof and retreats inside the castle for a quick breather.

She soon realises she's trapped in a room filled with wights, but is able to silently evade their notice and get out the door. Which is of course when she runs into another horde of wights and runs from them as well (and we finally get our answer to what Arya is running from in the season trailer). She runs into Beric and the Hound, and they all manage to find safety just in time for Beric to grab a seat and die from his wounds. With no priest to resurrect him, Beric takes his last breath knowing that he's saved Arya from impending doom.

Down in the crypt — which has been said to be the safest place for everyone — Sansa, Tyrion, Varys, Gilly, and Missandei are among those hiding in the tombs for safety. Varys jokes that "at least we're already in a crypt," but his joke doesn't get very far with his audience. Tyrion laments that they aren't able to see anything going on outside because they might be able to provide insight on how to help, but Sansa tells him very bluntly that he would die out there. "Witty remarks won't make a difference." She says that at this point, the best thing they can do is face the truth.

This spurs Tyrion to "joke" that they should have stayed married (he was very clearly fishing for a sign of possible reconciliation) and Sansa glibly — but honestly — tells him that he was the best of her beaus. But, she knows they could never work because his loyalty to his "Dragon Queen" would divide them. Missandei is not here for any slander of her queen and cuts in to say that without the Dragon Queen, they would all be dead by now.

But of course, Missandei jinxed them all because what happens later in the battle? The dead in the tombs reanimate and begin attacking everyone in the crypt. Considering they're all women, children, and the elderly, everyone is pretty easy pickings and they go down screaming. Sansa and Tyrion lead the others as they attempt to make their way through the massacre and reach the exit safely. By the end, all we can say for sure is that Sansa, Tyrion, Varys, Gilly, and Missandei survive the terror in the crypts.

Though Daenerys and Jon attempt to aid in the battle down below, their efforts are quickly thawted by the windstorm that prevents them from being able to see. Now, I've never ridden a dragon before, so I can't comment on the best way to steer them, but I feel like a lot of their confusion could have been prevented by flying upwards — away from the windstorm. But I digress!

The Night King appears mid-storm, seated on Viserion who immediately begins attacking his dragons siblings. Jon and Rhaegal fall to the ground, but Daenerys and Drogon are able to knock the Night King off his perch and injury Viserion. When she notices the Night King getting to his feet on the battleground, Daenerys takes the chance to burn him with dragon fire — but that doesn't work! She flies away when he tosses another javelin their way, not willing to lose another dragon to his deadly aim.

On the ground, Jon tries to attack the Night King, who hears him approaching (seriously, he was not subtle) and pulls his favourite trick to cut him off. He reanimates the recently killed united forces of Northerners, Unsullied and Dorthraki everywhere — yes, this includes everyone who died in Winterfell — and leaves Jon to fight his way out of a swarm as he makes his way to the godswood. Dany returns in time to burn the horde of wights closing in on Jon, allowing him to run off and aid Bran. But the rescue costs her an opportunity to flee, as the wights begin attacking Drogon. The dragon takes to the sky to shove off the mob of wights, dropping his mother. She falls off his back and is seconds away from death when Jorah comes to her side, fighting off the approaching wights. It doesn't end well for him.

As the warriors continue fighting off the hordes of wights outside the walls of Winterfell, Theon and the Ironborn lie in wait for an attack as they protect Bran in the godswood. When Theon starts to apologise for all his crimes against the Starks, Bran tells him the iconic line from the season eight trailer: "Everything that happened before brought you where you are now, home." Then he basically tells Theon to hold his calls and wargs into nearby ravens, probably using his Three-Eyed Raven powers to do god-knows-what.

The wights attack swiftly, taking down all of the Ironborn except Theon. Fresh out of bows, but full of the need to redeem himself, Theon literally slays all their asses. By himself, fam! Truly, a crowning moment for the Greyjoys. We don't get to revel in his victory too long, the Night King and his White Walker cronies stroll up with another batch of wights to stare menacingly at the the pair beneath the giant wierwood tree. Both Theon and Bran know that Theon's number is up, and the younger man coming out of his warg state to tell him, "you're a good man. Thank you." Theon dies by the Night King's hand and the frost baddie approaches the wheelchair-bound Stark who doesn't even look at him until he's standing directly beside him (such a power move).

Just when Bran finally deigns to look at him, Arya appears from behind the Night King, Catspaw dagger clutched in her left hand. The Night King immediately spins around to stop her, grabbing at her throat and her arm but, using the same trick she used against Brienne, Arya drops the dagger and catches it with her right hand, thrusting it into his belly and causing him to shatter instantly. Yes, that's right, Arya Stark kills the Night King. All over Winterfell, wights and White Walkers alike crumble into ice. Outside the castle walls, Jorah dies as Daenerys holds him in her arms and Rhaegal returns to comfort his mother. The battle is finally over.