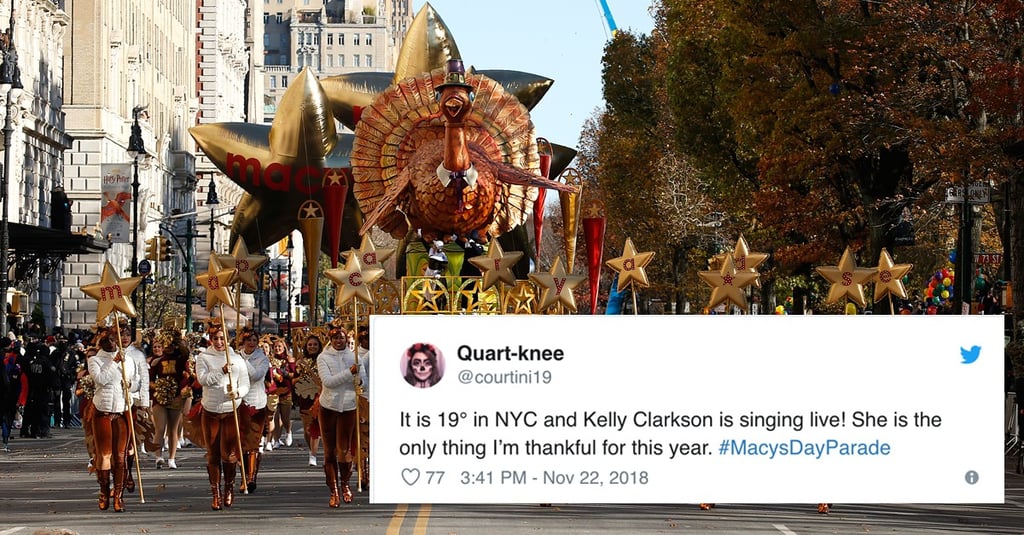 The Macy's Thanksgiving Parade may be a US tradition, but it's also been the subject of some musical tea-sipping of late, with performers being called out for lip-syncing instead of singing live at the event. As John Legend pointed out on Twitter, performers appearing on floats have no choice but to lip-sync, because the floats can't handle the sound requirements needed for a live performance. However, those appearing on the ground do, technically, have the opportunity to bring along a band. And that's exactly what Kelly Clarkson did.

Related:
It's Impossible Not to Get Chills Over Kelly Clarkson's Stunning Greatest Showman Cover

Despite the freezing temperatures in NYC on Thursday, the American Idol star belted out a live performance that had the people of Twitter in raptures. The funniest thing? The song she chose to sing in the cold weather was "Heat", and the irony was not lost on Kelly or her fans. Keep reading for a clip of the performance, and to see what people had to say about their new Thanksgiving queen.

Christmas
Thanks to Kelly Clarkson and Ariana Grande's New Song, It's Beginning to Look a Lot Like Christmas
by Princess Gabbara 15/10/21