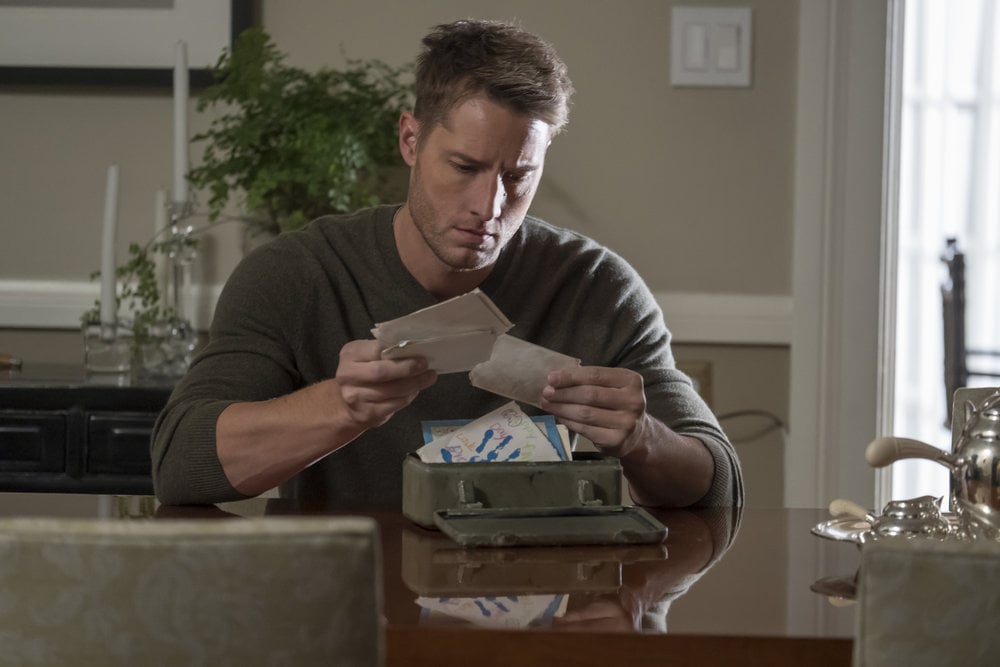 While we're still drying our tears over Jack's death, another beloved member of the Pearson family may be in danger on This Is Us. During the Super Bowl episode, This Is Us takes a leap into the unknown as it reveals Randall making good on his promise to visit Tess at work once she's an adult. The scene is a gamechanger for the show, because now we know that the Pearsons' past, present, and future are all part of the story. However, that might not be good news for Kevin fans.

Jumping straight into another death mystery could be risky, but it certainly feels like season two has been setting up the future demise of Kevin. Poor Kevin has inherited all of his father's demons, and watching him struggle with addiction has been gut-wrenching. Since he left rehab, it has felt like Kevin is on the road to a fresh start, but it would be just like This Is Us to be setting up a tragic end for the oldest of the Big Three.

In fact, hints that Kevin may die young like his father have been sprinkled throughout the first two seasons. Even series creator Dan Fogelman has made some less than reassuring comments about Kevin's fate. After Kevin and Randall's heart to heart over Randall's inability to imagine himself as an old man, some fans assumed that Randall was in danger. However, in an interview with Entertainment Weekly, Fogelman reassured viewers that Randall is as safe as any character could be — but his thoughts on Kevin were far less comforting. Fogelman told EW:

"Watching that scene between Randall and Kevin, the hairs on my arms go up more for Kevin, how assuredly he talks to Randall about how you're never gonna die but doesn't say anything about himself. We're not [hinting at] anybody's death, but it's always interesting the way that people view their own mortality."

Sadly, Kevin's reluctance to share whether or not he can imagine his own future with his brother is far from the only clue that there's something tragic heading his way. Fate keeps intervening where Kevin is concerned, but there's a growing sense that his time might be running out.

1. Kevin almost drowns in the pool.

Way back in season one, Kevin's desire to get his mom and dad's attention almost leads to him drowning in the pool. Kevin manages to find his way out of the deep end, but it's a scary near miss that cuts to the root of Kevin's feelings that he's an outsider in his family. It also leads to a scene where Kevin relays his frustration to Jack by saying, "Meanwhile, where's Kevin? Oh, guess what, he's dead." Now, this is obviously an overreaction from an upset little boy, but it still feels ominous in retrospect.

2. Kevin isn't at home during the fire.

We know Kevin feels guilty for not being with his family the night of the fire. He even seems to believe that things may have gone differently had he been there. The truth is, not being there almost certainly saved his life. Remember, Kevin's room is in the basement, and the fire starts downstairs. There's a chance that Kevin may not have made it out of the fire at all, especially since it was already causing damage to the upstairs of the house by the time Jack woke up.

Kevin's beautiful speech to his nieces about how life is a painting, and just because someone is gone that doesn't mean they're not still with us, could be a pivotal piece of the future puzzle. After all, the last thing that viewers see before the flash-forward to Randall and Tess in the future is Kevin's painting on Tess's wall in her bedroom. At the time that Kevin gives the speech, he's talking about Jack and William, but his words could just as easily apply to his future (or lack thereof).

The entirety of Kevin's season two arc has been about coming to terms with his place in the Pearson family and facing his demons. He's on the right path to recovery, but this dark time is in many ways a mirror of Jack's struggle with addiction. Granted, Jack doesn't show his family just how out of control things had gotten for him, but there's no denying that Kevin is following in his father's footsteps. Much like Jack, he even chose to get behind the wheel while drunk — and also like Jack, the situation thankfully doesn't lead to anyone getting hurt.

Ultimately, what would be more poignant than Kevin finding his path in life only to have his story cut short just as tragically as his father's was? This Is Us loves its mysteries and its symmetry, and now that it has offered up a glimpse into the future, don't be surprised if it turns out Kevin's not there to experience it with the rest of his loved ones.