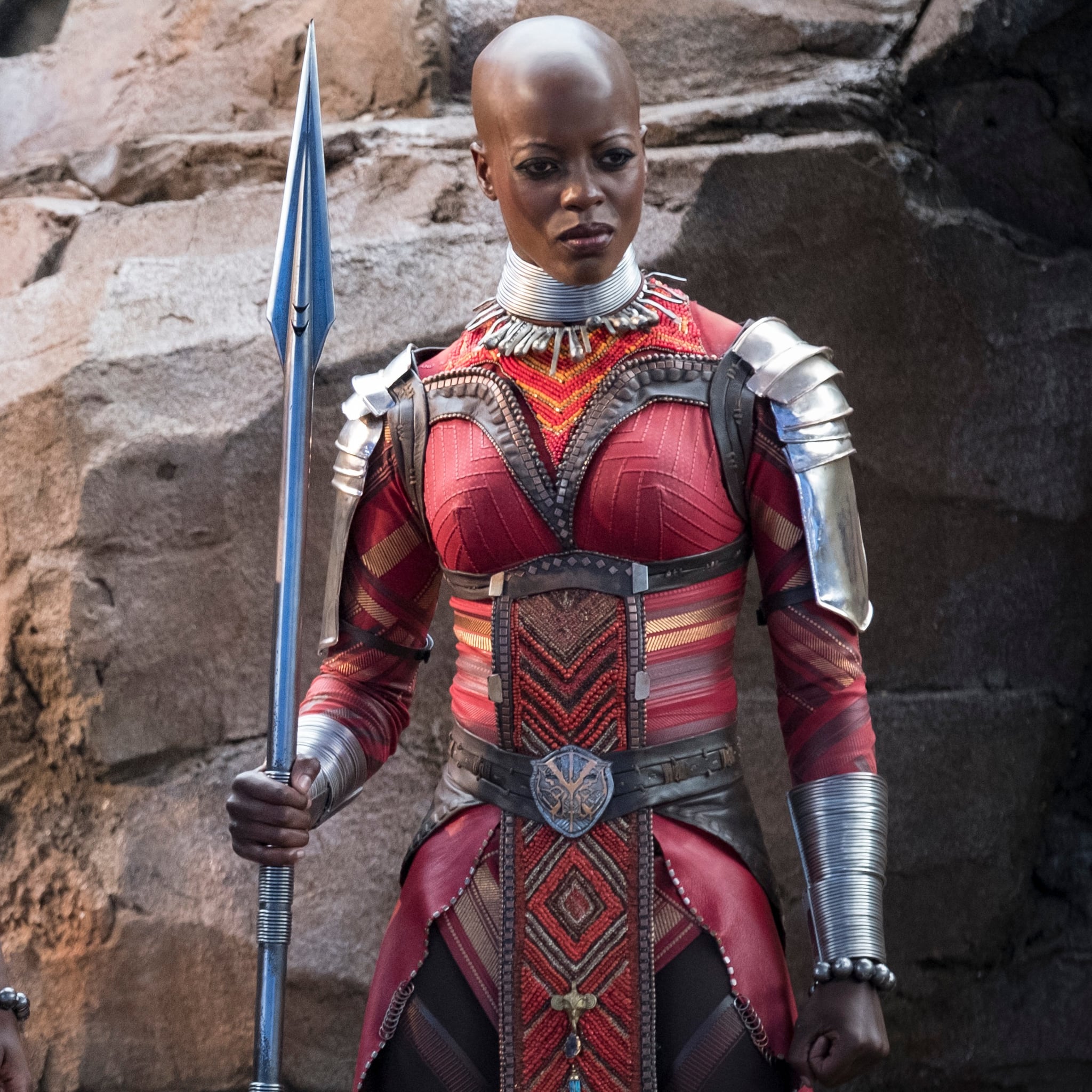 In the time since it was first announced, Black Panther has grown from just "the latest Marvel movie" to a vital piece of cinematic history. With a stellar, nearly all-black cast, a range of impeccably crafted female characters, and even an almost-perfect Rotten Tomatoes score, it's clear how groundbreaking and history-making the film is. I mean, there's even a f*cking badass soundtrack that will keep you pumped for months and months on end! And yet, for all the fantastic things that Black Panther has accomplished, there's one aspect of the film that's still just a little bit disappointing. Marvel seems to have erased the sexuality of the Wakandan warrior Ayo, played by Florence Kasumba.

Before we get into why this missed opportunity for LGBTQ+ representation is upsetting, here's a little backstory. Black Panther was first introduced in July 1966, in Fantastic Four issue No. 52. Now, the romance in question actually blooms in a relatively new comic book spinoff series called Black Panther: World of Wakanda. The first issue was written by Ta-Nehisi Coates, Roxane Gay, and Yona Harvey and was published on Nov. 9, 2016.

Even the description on Marvel's official website hints at a lesbian romance between two Wakandan warriors: Ayo and Aneka. "You know them now as The Midnight Angels, but in this story they are just Ayo and Aneka, young women recruited to become Dora Milaje, an elite task force trained to protect the crown at all costs," the synopsis reads. Then, "What happens when your nation needs your hearts and minds, but you already gave them to each other?" When it comes to the film, we do know Joe Robert Cole signed on to write the screenplay in October 2015. Production on the film itself began in January 2017, but there's no way of knowing when the script was finished and how seriously the film's writers considered this particular comic book while they fleshed out the story. 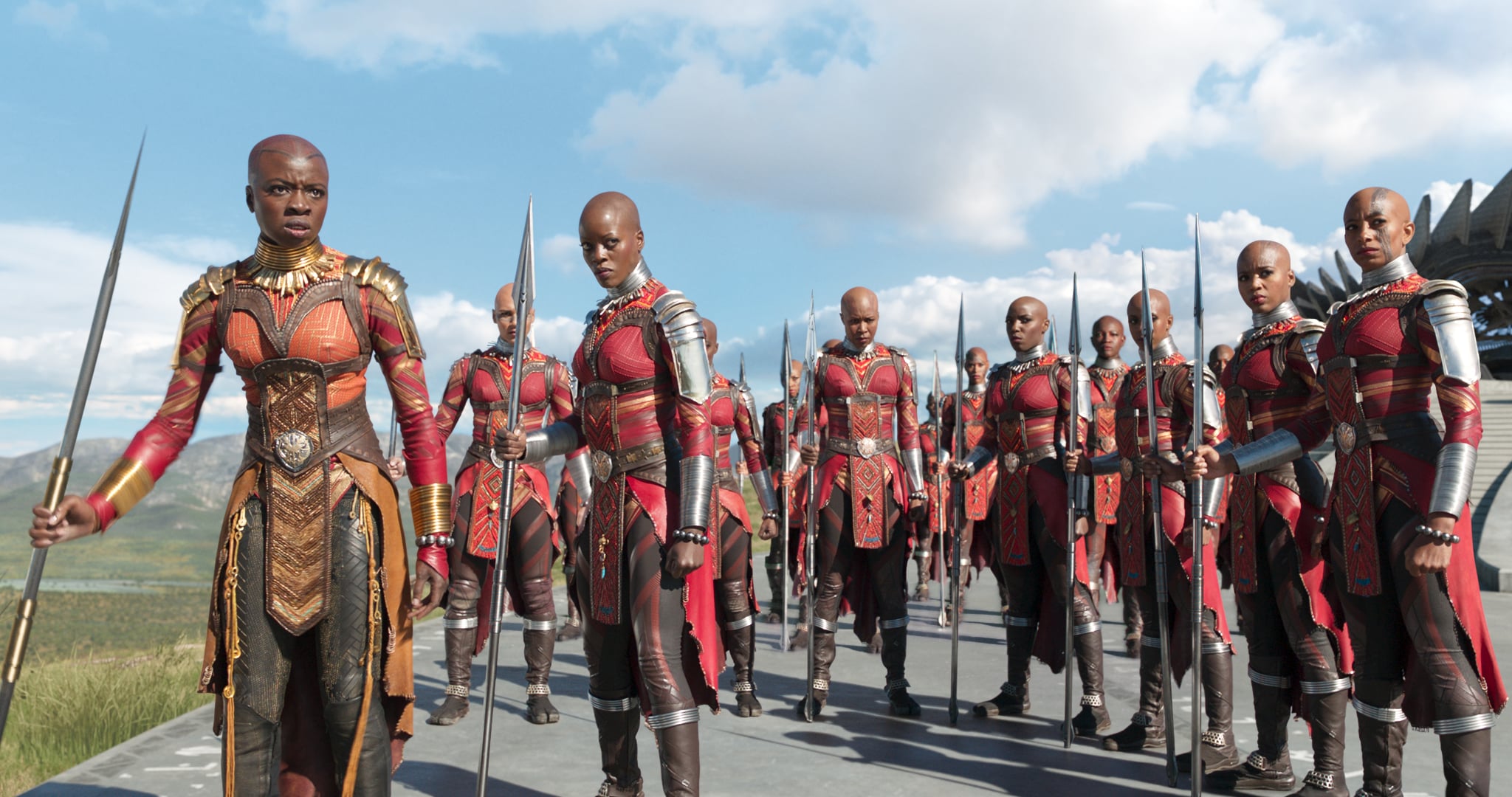 Here's the thing: back in April 2017, Vanity Fair writer Joanna Robinson got to watch some early footage of the film and picked up on a possible romance between Ayo (Kasumba) and Okoye (Danai Gurira). She describes the rough cut of the scene:

In the rough cut of this Black Panther scene, we see Gurira's Okoye and Kasumba's Ayo swaying rhythmically back in formation with the rest of their team. Okoye eyes Ayo flirtatiously for a long time as the camera pans in on them. Eventually, she says, appreciatively and appraisingly, "You look good." Ayo responds in kind. Okoye grins and replies, "I know."

Once the article was published, Vanity Fair added a clarification. A Marvel representative had reached out to say that this was not intended to be a romantic relationship. On Feb. 12, ScreenCrush published an interview with screenwriter Joe Robert Cole. When asked whether the lesbian romance had been discussed as a possible aspect of the film, he seemed to confirm that the LGBTQ+ storyline had been considered without really committing to an answer.

I think the short answer is yes. I know that there were quite a few conversations around different things, different directions with different characters, and characters that we may have. We thought, "Well, maybe we'll work it this way with an arc or work it that way with an arc. The scene you're talking about, I don't remember. I can't remember the exact exchange you're talking about, but I think it was really brief. I'm not sure. I know that it was not — there wasn't some major theme through that we were looking to explore with that in terms of the story. We didn't like, pull out a full thread of some theme. But your friend quite possibly could be right, or I'm maybe having a brain fart here and just can't remember.

To complicate matters further, actress Kasumba weighed in on the situation as well. In speaking with Vulture, she seemed to acknowledge the scene in question, but she also defended the creative powers that be's decision to exclude it.

The thing is, if the makers would have wanted everyone to see the scene, it would have been in the movie. The final result that we've seen, there were a few scenes that have been cut. Different scenes, also. They didn't make it into the movie for certain reasons, and at that point, I have to say: What their reason is, I can't tell you, because nobody told me about whether it's in or not. But at this point, I personally think people have no idea who T'Challa is, who are the Wakandans, what is Wakanda, where is Wakanda, what is their culture. There are so many important things that had to be told in these two hours. So the focus was on what is so important for T'Challa. What happens after the last movie that we saw. I know all the other scenes that we have also filmed that are not in the movie. People have their reasons why not.

So, here's what we have: there are two lesbian warriors in the Black Panther canon that definitely exist. The creators behind the film may have discussed them during the early stages of production. They may have even written in a scene that nods to this romance. They may have even filmed (and later cut) this scene. Marvel and Disney had the chance to, in a small moment, flesh out Wakandan culture in a unique way that would give LGBTQ+ persons the sense of inclusion and representation. But this moment did not happen. 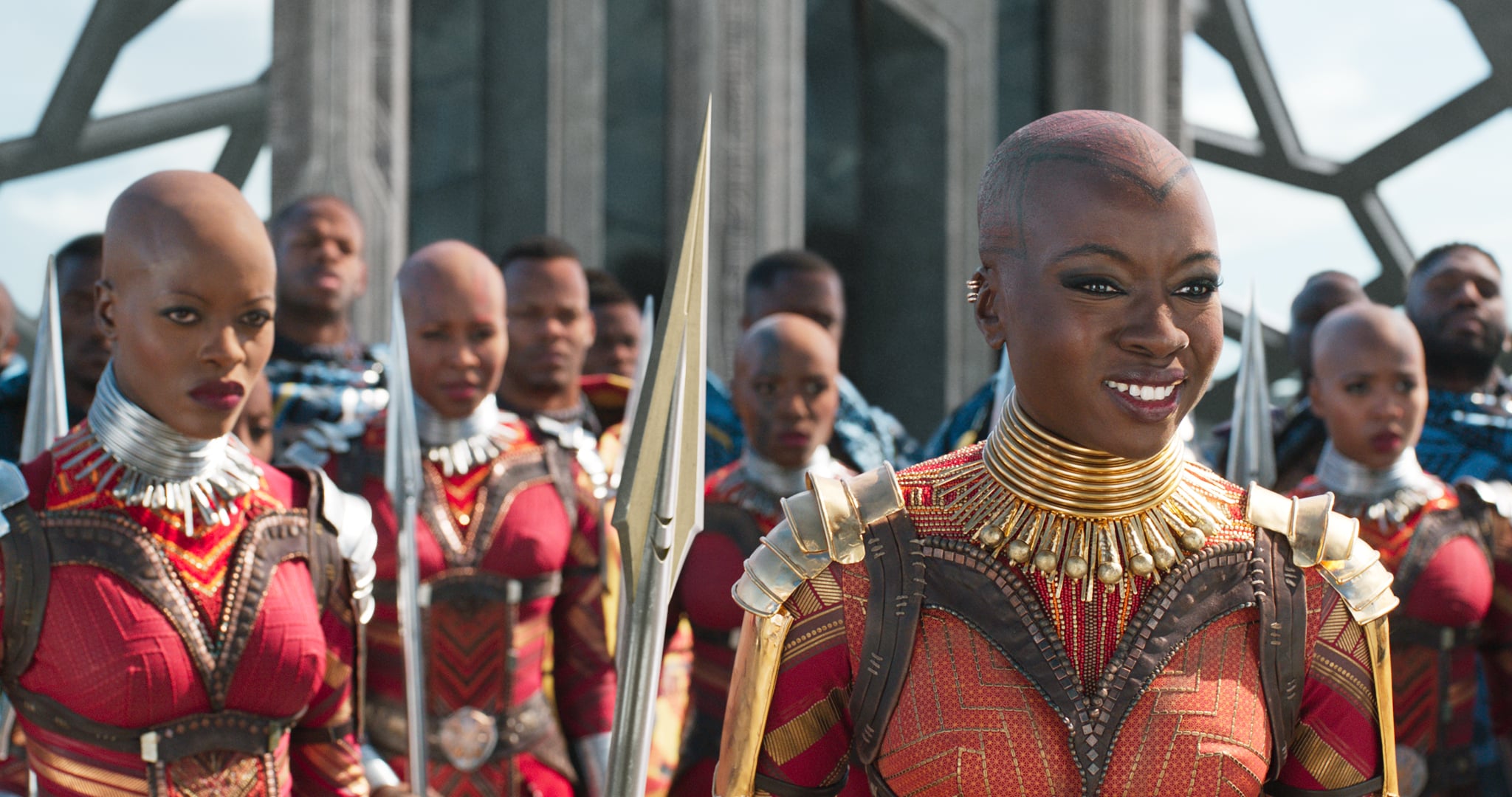 I see Kasumba's point. There's a lot to cover in Black Panther to make sure the audience knows what's going on. The film has to introduce characters and set up the mythology for an entire fictional nation with multiple tribes and unimaginable technology. It's not an easy feat. But I respectfully disagree that there wasn't space for LGBTQ+ inclusion. Considering no Marvel movie has ever before featured any explicit LGBTQ+ inclusion of any kind, one scene matters. You don't need to make something like this a full storyline to make someone feel seen. You can have a wink or a nod to a lesbian romance, and that might be enough. Or, at the very least, it might be a start.

Considering no Marvel movie has ever before featured any explicit LGBTQ+ inclusion of any kind, one scene matters.

What I'm saying is, this short scene would not have been a detriment to the film and would not have taken away from the audience's ability to immerse themselves in the world of Black Panther. If Disney can boast an "exclusively gay moment" in Beauty and the Beast without giving LeFou an in-depth character arc, so too can Black Panther announce the presence of lesbians without taking away from the principal (and important) central story. Speaking for myself, I would love to one day see a Marvel movie in which the main character (and main story) is LGBTQ+ focused. But representation has to start somewhere, and Black Panther, a movie that's already an anomaly in and of itself, could have been that origin point. Unfortunately, it's not.