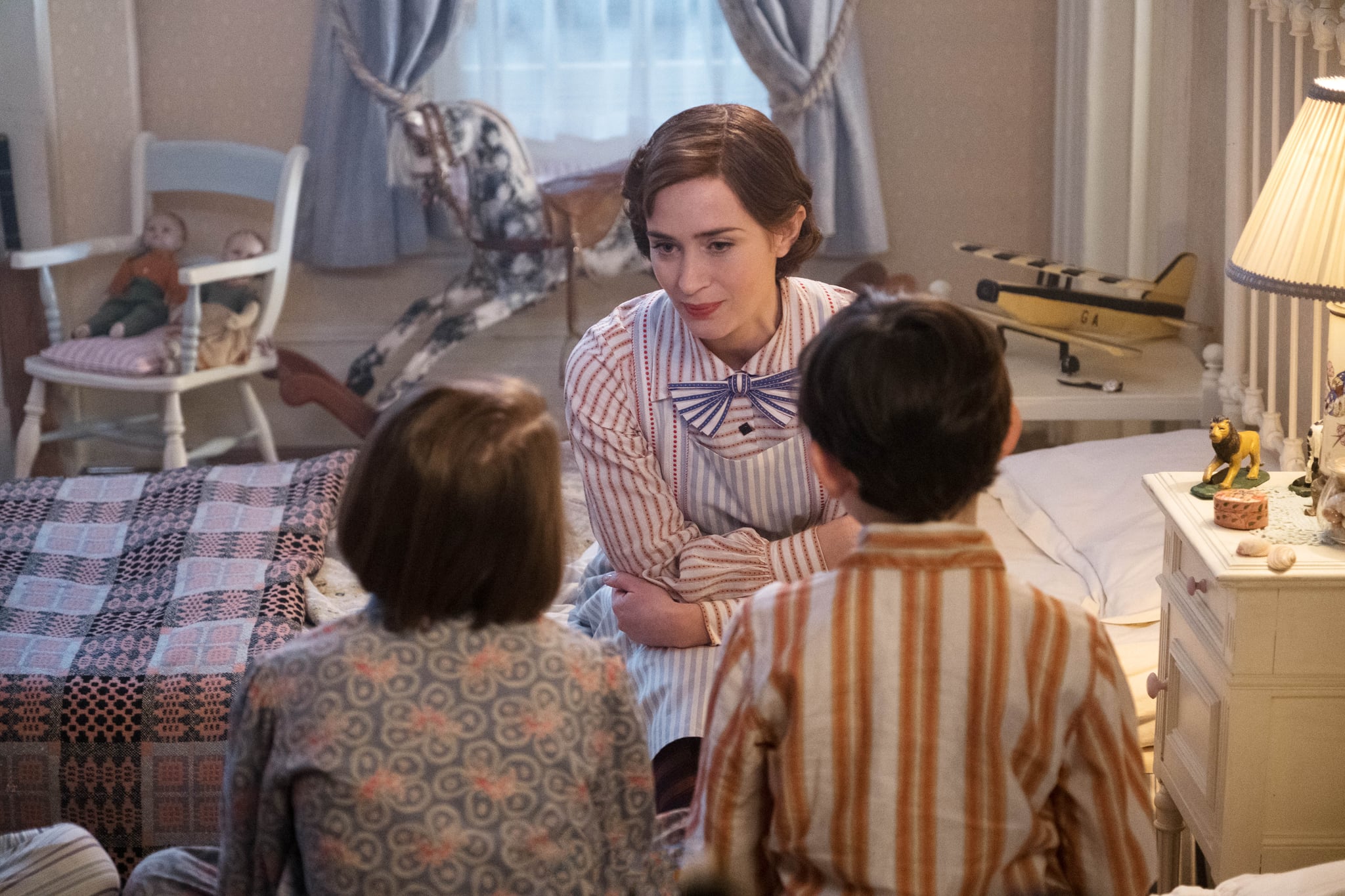 If you haven't already heard, Mary Poppins, the world's favourite nanny, is back. In Mary Poppins Returns, Emily Blunt plays the titular role once held by the lovely Julie Andrews. She stars across a practically perfect cast that includes Lin-Manuel Miranda (aka Alexander Hamilton himself) and Ben Whishaw, the voice behind feel-good icon Paddington Bear. In the age of reboots, the movie is a sequel as opposed to a revamp. As a flurry of magical news comes out about it, you might be wondering if the film draws from an actual book.

Well, it's as complicated as supercalifragilisticexpialidocious. Screenwriter David Magee takes some creative liberties and sets Mary Poppins Returns 25 years after the original movie — Michael even has his own children now. But many vivid characters, such as the Balloon Lady (Angela Lansbury) and Topsy Turvy (Meryl Streep), are inventions from P.L. Travers's stories. Magee definitely had a lot of source material to play with, since Travers wrote eight books around the delightfully quaint nanny.

Here's a condensed rundown of all of Travers's beloved Mary Poppins books and details on how the written adventures tie into the celebrated Disney franchise — especially pay attention to the first three novels!

The original film predominantly draws from Travers's debut Mary Poppins novel. The nanny arrives at the Banks family by way of the east wind and brings Michael and Jane on a series of adventures, in which they meet the Bird Woman, attend a zoo birthday party, and get into other wild shenanigans. By the end, Mary departs by opening her umbrella and going away with the west wind.

The exposition of the Disney sequel draws a lot from this book. In it, Michael flies his kite, which Mary latches onto and makes her return. The nanny and children visit an upside-down tea party and a sky circus. Later, the duo's sister Annabel Banks is born.

Mary Poppins Returns does deviate slightly from Mary Poppins Comes Back. In the film, it's Michael's son Georgie who plays with the kite. Michael's other children, John and Annabel, are named after his younger siblings in the book. Characters from this installation that we meet in the new movie include Topsy, Mary's cousin whose world turns upside down every month, and the Balloon Lady, a woman at the park who sells magical balloons. Drawing from the second book, the sequel film shows the children entering the Royal Doulton Bowl with Mary for an animated adventure, which includes stopping by a circus-like music hall.

In the third book, Mary Poppins comes falling down from fireworks and resumes her nanny obligations. The children visit her cousin Fred Twigley, attend an underwater garden party, hop onto peppermint horses, and befriend a statue. Mary Poppins Returns certainly draws from this book, as we see sequences of the children mesmerised in an underwater adventure.

Travers's other books (which are perfect holiday gifts, by the way) don't drive much of the narrative in Mary Poppins Returns but are still each a delightful spoonful of sugar.