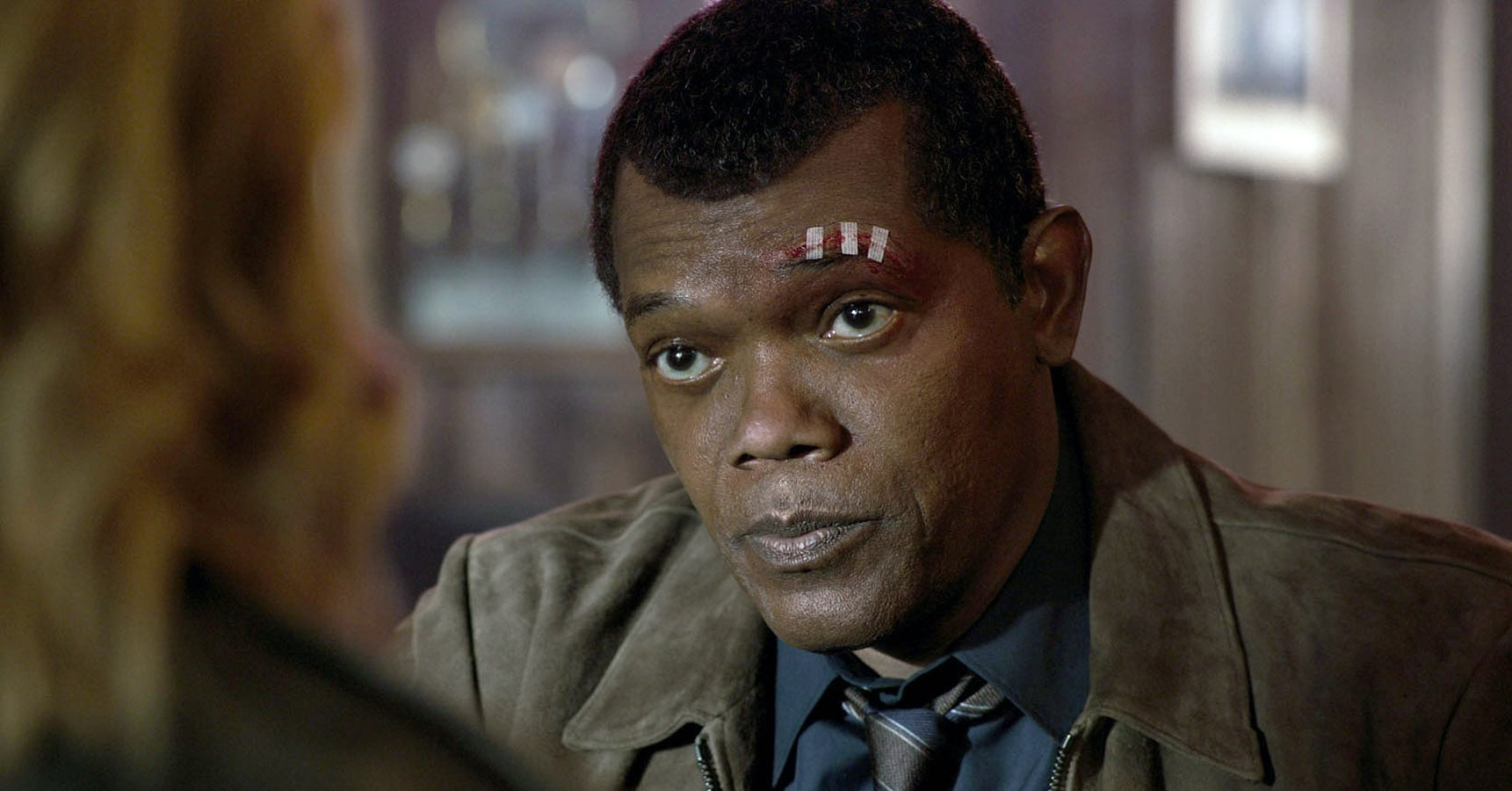 Warning: spoilers for Captain Marvel ahead!

The Marvel Cinematic Universe has been churning out superhero hits for over 10 years now, and Samuel L. Jackson's S.H.I.E.L.D. director Nick Fury has been in nine of them. But what if this whole time, it hasn't actually been Fury at all? That's the important question raised by Reddit user PowerRangersLOL after they and a number of fans (correction: a HUGE number of fans) went to see the MCU's latest release, Captain Marvel, in March.

While the action film centres around Carol Danvers (Brie Larson) — aka the titular superhero — and how she finally comes to terms with her immense levels of power, it also introduces us to a very young Nick Fury. Like, so-young-he-still-has-both-eyes young. Despite initially being at odds when Carol crash lands to earth in 1995 and accidentally destroys a Blockbuster in LA, the pair end up becoming close friends as Carol goes up against four fellow aliens, who happen to be members of a green-skinned, shape-shifting race called Skrulls. Their bond is why Fury eventually calls for Carol right before he disintegrates into dust at the end of Avengers: Infinity War following Thanos's snap, setting in motion the events for Endgame. But is the Fury who sent Carol that beeper message actually even human?

Related:
Before We Get Caught Up in Endgame Mania, Let's Remember Where We Last Saw the Avengers

To discern if a person is truly a human or merely a Skrull alien in disguise, Carol tells Fury that you should ask them to give you a bizarre, highly specific detail about their life (the idea is that because the way Skrulls mimic other life forms only gives them so much intel about the person they're impersonating, they'll struggle to come up with anything and give themselves away). The detail Fury chooses to give Carol is: "If toast is cut diagonally, I can't eat it."

OK, kind of weird, but nothing too out of the ordinary, right? WRONG, if you take into account a key scene in Avengers: Age of Ultron. You see, the Avengers have gone into hiding at Clint's farm, and are soon joined by Fury, who proceeds to make himself some toast in the kitchen. And how does he cut the toast? Diagonally, of course!

So, given what he tells Carol in Captain Marvel, now people are wondering if that seemingly innocuous moment in Age of Ultron is a hint that Fury has been a Skrull in disguise all along. And, admittedly, there are a few things about it that make sense. (Well . . . kind of.)

For starters, the Fury we meet in Captain Marvel is a far cry from the gruff agent who we've gotten used to in all the other MCU films as of late — he's easygoing! He cuddles with Goose! He cracks lighthearted jokes! He has hair! He's even remarkably chill about losing his eye!

By all accounts, he's practically an entirely different person, personality-wise.

There's also the fact that there are four Skrulls who land on earth: leader Talos (Ben Mendelsohn), his science extraordinaire, and two other warriors. While we know the fates of three of them — Talos escapes with his family in the end, the scientist is killed by Yon-Rogg (Jude Law), and the third dies in a car crash with Fury — we never find out what happened to the fourth Skrull.

Could he have taken Fury's place at some point? 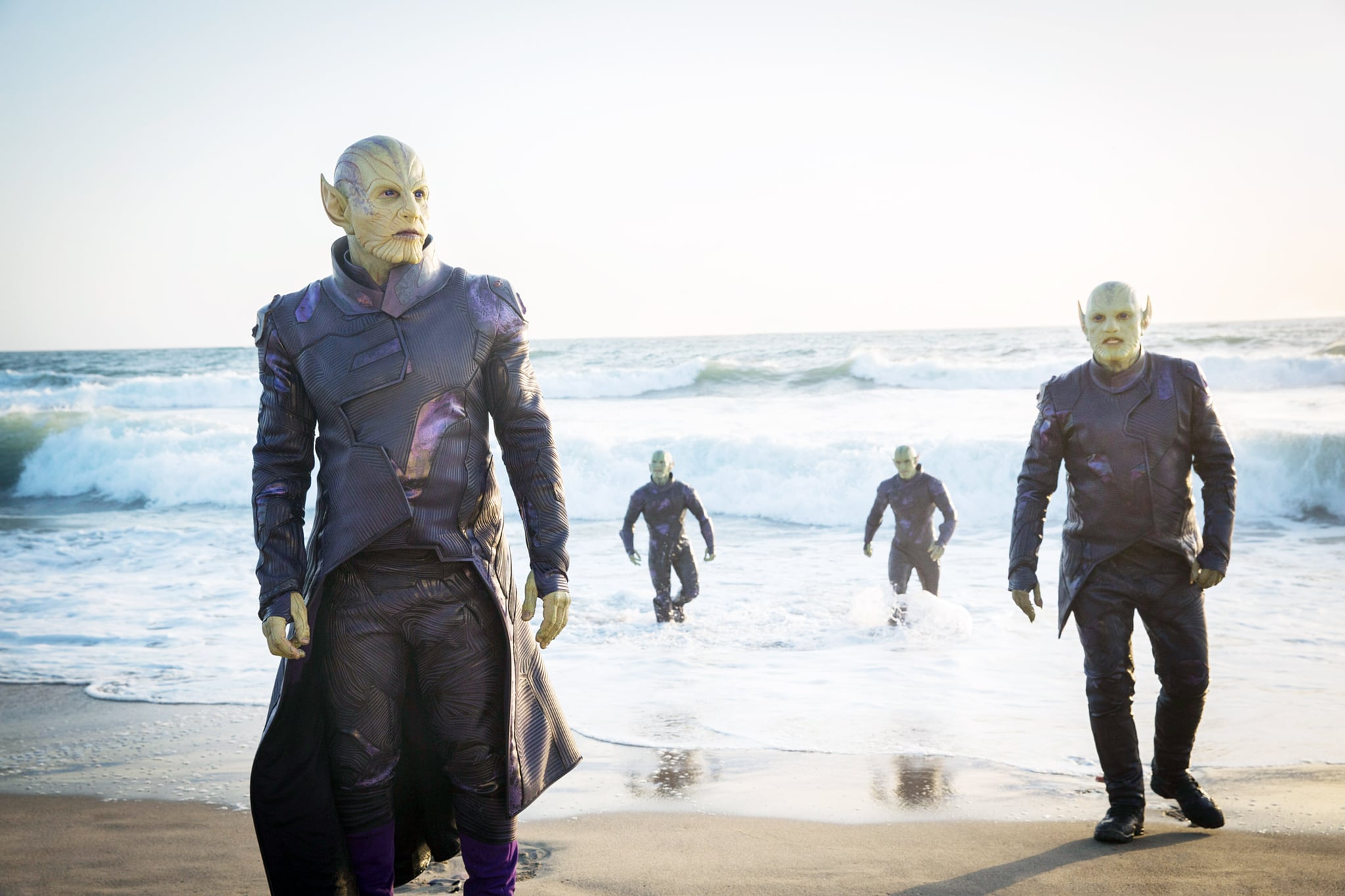 Though the theory is definitely intriguing, I have to chalk it up to a continuity error in the MCU. (There have been a LOT of movies, it's an easy mistake.) After all, Fury's changing personality can be explained away by how hardened he becomes after witnessing years of battle, death, and destruction while working for S.H.I.E.L.D. And as for the fourth Skrull, they might have just slipped away to do Talos's bidding from another location once he and the scientist showed up at Maria Rambeau's farm to call a truce with Carol.

And what would have happened to the real Fury? If you really want to reach, you could say he died in Captain America: Winter Soldier and Talos saw an opportunity to return to earth and disguise himself as Fury.

Are you convinced? Or do you think the good folks at Marvel simply made a tiny error and are now laughing as we all sit and stir over this potentially shocking development? Either way, hopefully we'll get a definitive answer when Fury returns in Endgame in just a few weeks.

The Wilds
What Will Happen on Season 2 of The Wilds? Here Are Our Top 10 Theories
by Ashley Broadwater 3 days ago