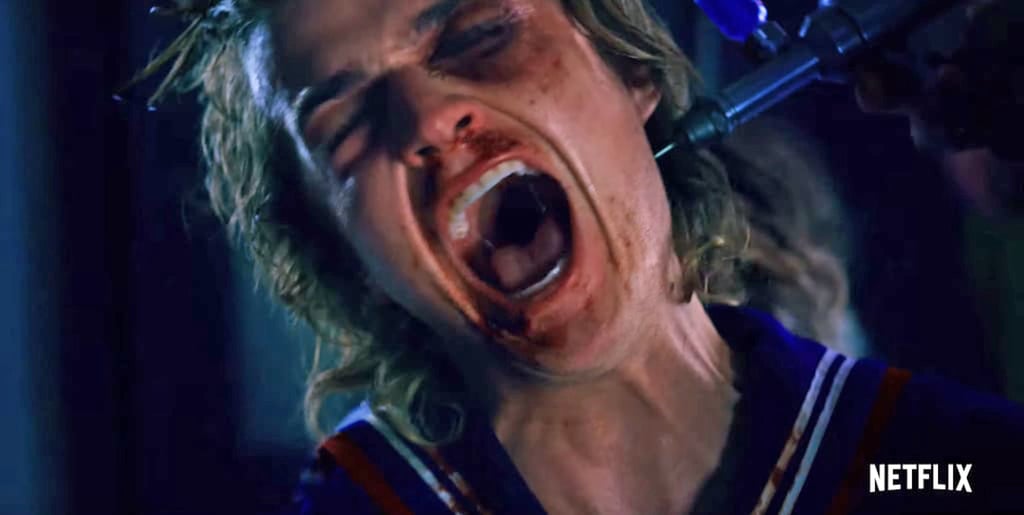 In case you've been chillin' in the Upside Down and missed the news, the official trailer for Stranger Things season three has arrived, and it's quite a doozy. The fast-paced teaser is jam-packed with clues about what's in store for the Hawkins, IN, crew. After Mike Wheeler and Eleven share a smooch, we see resident tool bag Billy Hargove fully embracing his shirtless lifeguarding duties, Will Byers mysteriously drenched in sweat, Hopper hunting down a random assassin, and a terrifying new monster coming to life. But perhaps the most striking frames of them all showed douchebag-turned-protector-of-six-kids Steve Harrington getting ganged up on — yet again.

Though Steve is initially happy as can be at his new job in the Starcourt Mall, the trailer soon shows him in anguish as his face is bloodied and he's later injected with a needle of an unknown source. This isn't the first time the Stranger Things heartthrob has gotten the sh*t end of the stick during the series — remember when he was clocked in his pretty little face by Jonathan Byers and head-butted WWE style by Billy? — but it was certainly the last straw for viewers. As soon as the ominous trailer dropped, fans practically began readying their pitchforks and "Justice For Steve" signs in preparation for a riot as theories of the heartthrob dying this season swirled.

Catch a glimpse at all the relatable fan reactions ahead, and, dearest Netflix, please don't take Steve and his luscious hair away from us.

Related:
Why the New Monster in Stranger Things Season 3 Is Likely a Character We Already Know
0
previous images
-10
more images
Previous Next Start Slideshow
Twitter ReactionsStranger ThingsTV
Around The Web

Netflix
Unsolved Mysteries: Breaking Down Each Case Featured in Season 1 of Netflix's Revival
by Stacey Nguyen 1 hour ago

Netflix
Unsolved Mysteries: 3 Theories on What Happened to Rey Rivera
by Stacey Nguyen 1 day ago