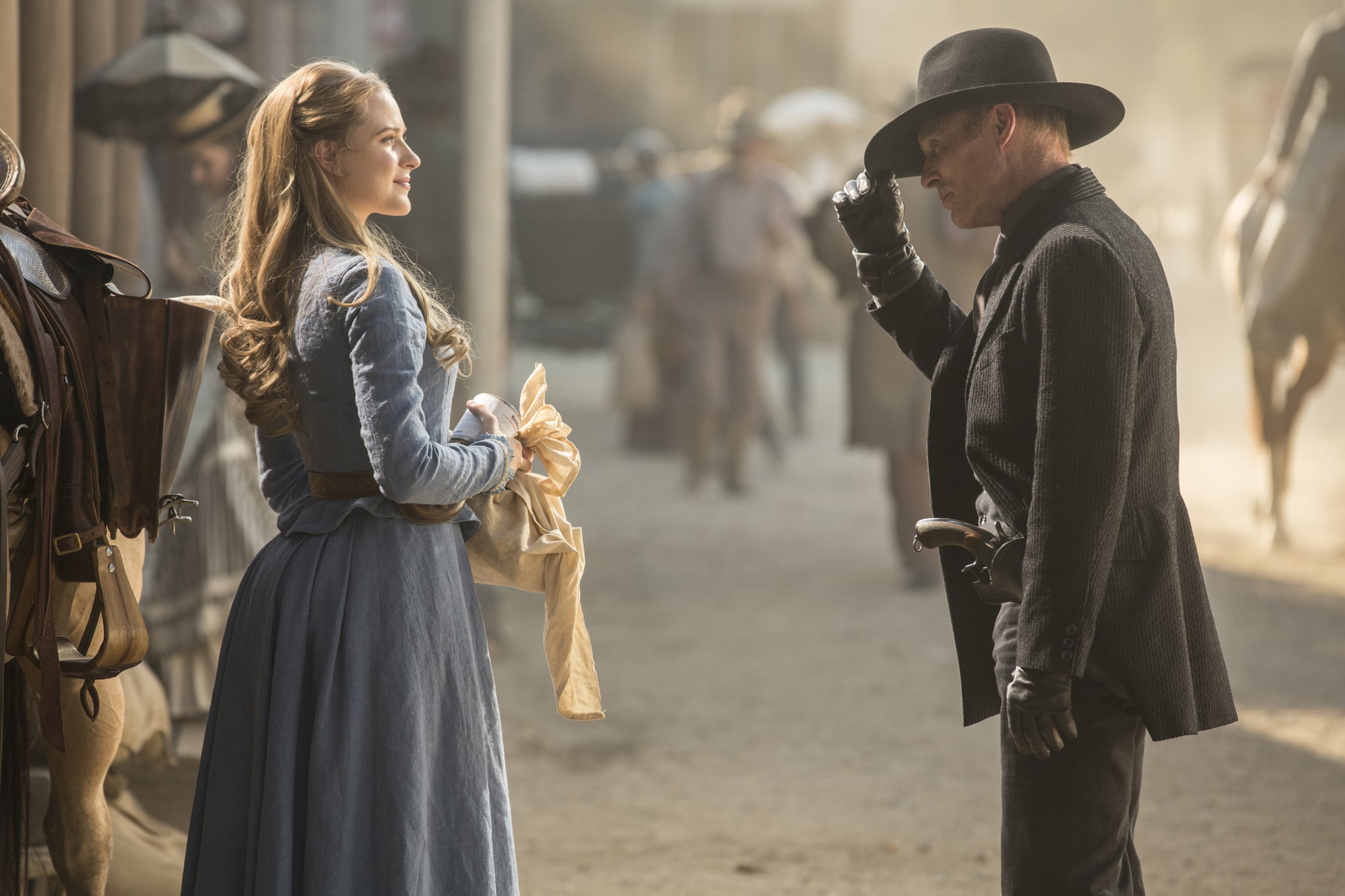 Listen, I know you probably thought your days diving deep, deep into internet conspiracy rabbit holes ended the day the Game of Thrones season seven finale aired. But guess what? Westworld has returned, and so have the show's mind-boggling theories. While the latest ideas (fortunately) don't suggest the show is taking place somewhere other than earth, they do provide a few interesting takes on why we keep seeing that wolf roaming around the theme park.

If you, like me, merely assumed the animal happens to pop up at the scene of Westworld's many massacres for a quick bite — what, you think Dolores is feeding that wolf Purina? — then I'm here to inform you that Reddit, as usual, has come up with some far more thoughtful explanations. During the show's season one run, Reddit user ephonium42 posited a question to fellow Westworld fans that got the wheels turning. "Whenever Dolores or Teddy have a flashback to their massacre they see a wolf," they wrote. "I can't figure out its meaning unless it signifies the beginning of consciousness. Has anyone else thought about this?"

It turns out plenty of people have thought about it, and all of their ideas are just as inventive as the storylines that are actually a part of Westworld.

Related:
Westworld: A Quick Refresher on Who Peter Abernathy Is and Why He's So Important

Dolores and Themes of Sentience

The massacre referenced in that Redditor's question is the one we see over and over again in the first season whenever Teddy (James Marsden) and Dolores (Evan Rachel Wood) have a flashback. The wolf appears a few times in these, but it's never clear what, exactly, it is; an actual wolf? An animal host? A harbinger of death? Fortunately Reddit's Spock_Nipples (excellent username, for what it's worth) peeled back a few layers to get to the heart of what the wolf could mean to Westworld:

"The show draws heavily on Native American symbolism and mythology. Operating from that perspective, Wolf symbolizes strength, truth, loyalty, intelligence, leadership, and awareness of self. Does that last sound familiar? Sentience? Wolves also mate for life, so there is a possible link to the Teddy/Dolores connection — I have a running theory that those two are linked on more than a romantic level; that they share an operational duality as a function of their existence. From that, I think we can entertain the idea that Wolf is Dolores' spirit animal."

The idea that the wolf symbolizes sentience would certainly make sense. Not only have cocreators Jonathan Nolan and Lisa Joy made a habit of including meaningful repetition and symbolism in the series thus far (the maze, for instance), but they've also hinged the entire show on the idea of sentience itself. As you might recall, that's the whole point of the show's now-iconic phrase, "These violent delights have violent ends."

Since Dolores has already gained sentience, why is the wolf showing up in season two? Not so fast — Dolores isn't fully sentient; she's still somewhat operating on the program that Arnold set up back in the day. However, as she declares herself in the premiere, her true self is beginning to shine through. It's just going to take some time for her to figure out how much of the innocent rancher's daughter and the evil Wyatt she really is. That being said, another character's connection to the wolf could come into play as well.

The Man in Black's Quest

In season two, we see the animal in question roaming around the gruesome aftermath of Dr. Robert Ford's narrative unveiling party, and it locks eyes with the Man in Black/William (Ed Harris). While he's not a host and therefore already possesses sentience and free will, the wolf's appearance could signify a major shift in his mission to reach the centre of the maze (in other words, the wolf could simply represent a rebirth, of sorts). We also know that William has tied his fate to Dolores's due to his obsession with Ford's creations, which could coincide with the wolf's presence. What's even more interesting is a second Reddit theory from user usernamenogood that directly connects William's obsession with the maze to the wolf, which might not be a wolf at all — it could be a coyote.

Related:
Confused About the Westworld Premiere's Final Moment? We Have Answers

According to the theory, the mazes that are emblazoned on the inside of every host's skull are reminiscent of an eerily similar symbol of the Tohono O'odham Nation of Southern Arizona, which depicts a Native American deity named I'itoi (a "mischievous creator god") entering a nearly-identical maze:

"I'itoi and Earth-maker shaped and peopled the new world, and they were followed everywhere by Coyote, who came to life uncreated and began immediately to poke his nose into everything. In this new world there was a flood, and the three agreed before they took refuge that the one of them who should emerge first after the subsidence of the waters should be their leader . . . It was Earth-maker, the creator, who came forth first, and I'itoi next, but I'itoi insisted on the title and took it. I'itoi 'brought the people up like children' and taught them their arts, but in the end he became unkind and they killed him . . . But I'itoi, though killed, had so much power that he came to life again. Then he invented war."

In this scenario, the "Earth-maker" is presumably Dr. Ford (and Arnold, to some extent), while William would take on the mantle of I'itoi. But the notion that I'itoi "'brought the people up like children' and taught them their arts" certainly seems like a nod to Dolores's current goal of leading a host rebellion. And when you take into account the ending of the season two premiere, which sees a massive number of hosts floating "dead" in a river, that could be the result of a scuffle between Dolores and her flock of newly murderous robots — does she inadvertently create a civil war within her own group?

As always with anything Westworld-related, none of us can know for sure. But these theories are a good reminder that practically every detail in the series is important, so you better start paying attention.