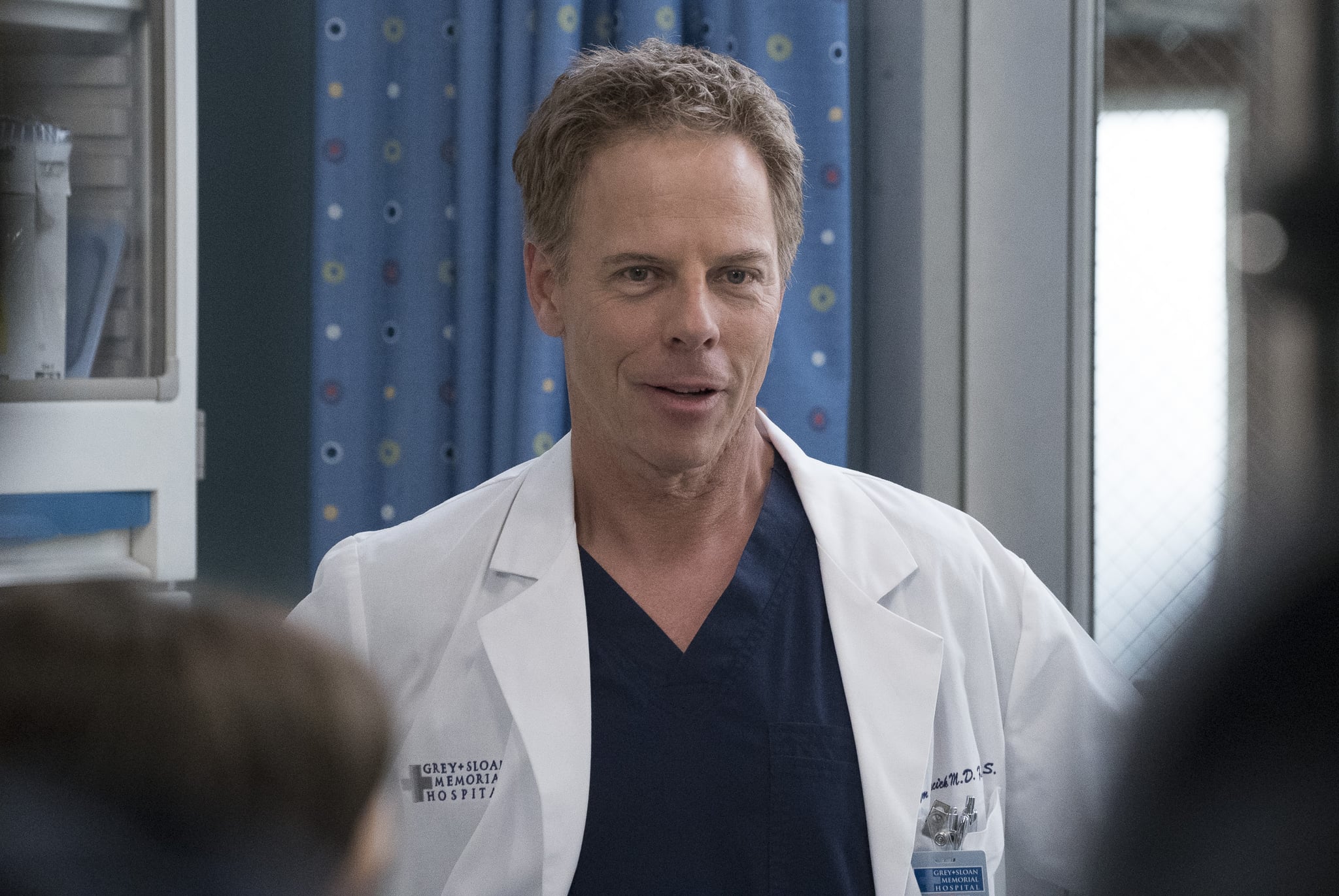 Grey's Anatomy's Dr. Tom Koracick just doesn't get the credit that he deserves. He's funny, devil-may-care, and surprisingly sweet — a wry Mark Sloan if you will. Plus, he's proven himself to be a competent colleague, excising Amelia's grapefruit-sized tumor and most of Catherine's cancer. We last saw him in the season 15 finale all by himself building Teddy's baby a crib, unaware that Teddy was giving birth and listening to Owen confess his love. This moment, we could say, did Tom so wrong. Now that Teddy will probably choose Owen, what's next for our favourite neurosurgeon in season 16? Well, he's not going anywhere — Greg Germann has been promoted to a series regular, so we're going to see more of him soon.

So what's the situation? In season 15, Teddy moves on from Owen with Tom even though she's pregnant with the former's baby. She shares an easy spark with the neurosurgeon, who genuinely cares for her. While Owen remains sullen and ragey, Tom introduces Teddy to his favourite mani-pedi place, finds her a house, and feeds her fries. Fries! But frustratingly, Grey's Anatomy seems fixated on making Teddy and Owen canon after years of teasing.

I doubt that the series will continue with the unwieldy Owen-Amelia-Tom-Teddy-Link love pentagon. In a narrative sense, it's less messy if Teddy or Tom politely backs out. If the relationship implodes, we'll probably see Tom heartbroken for a minute — after all, Teddy has brought out his refreshingly nurturing side. Still, I don't see their likely breakup as a loss since his character offers many intriguing layers beyond this romance.

First of all, season 16 could dive into Tom's pre-established relationships with surgeons like Amelia and Catherine. I'm expecting Tom to reach out to these characters somehow, perhaps following the inevitable breakup. (Hopefully not through a hookup.) We know that he has a rapport with Amelia, his first appearance in season 14 prompted by her brain tumor. He's her past mentor, fellow neurosurgeon, and occasional sex buddy. We also know that he's Catherine's friend and they flirt with each other often. Their relationship has been played up for laughs with Richard's jealousy, but it became deeper when we learned that she helped him grieve his son's death.

Speaking of which, Tom's background is also a poignant storyline to explore this upcoming installation, one arguably more interesting than his relationship with Teddy. In season 14, he and April share a one-night stand during her spiritual crisis. The morning after, he tells her about attending church following the death of his son. It's not just a line or a bit — we really see him talk to his son after his operation on Catherine's enormous tumor. This emotional backstory is definitely a dynamite stick of potential for Grey's classic heartstrings-pulling plots.

Then, there's Meredith. I'm interested in seeing him connect with Grey's twisty lead as he gets more screen time. It's not just because he has her late husband's job and charming demeanour — it's because they've both experienced devastating loss to some degree and I at least see a friendship there. Grey's Anatomy is no longer just Meredith's show, but she's still an integral part of it. It makes sense that a new series regular would relate to her in a meaningful way.

So here's to Tom not getting his heart shattered too badly and for many nuanced storylines around him to come. In season 16, he's undoubtedly a dark horse when it comes to Grey's signature emotionally gutting moments. We'll just have to see how his story unfolds when the new season kicks off on Sept. 26.