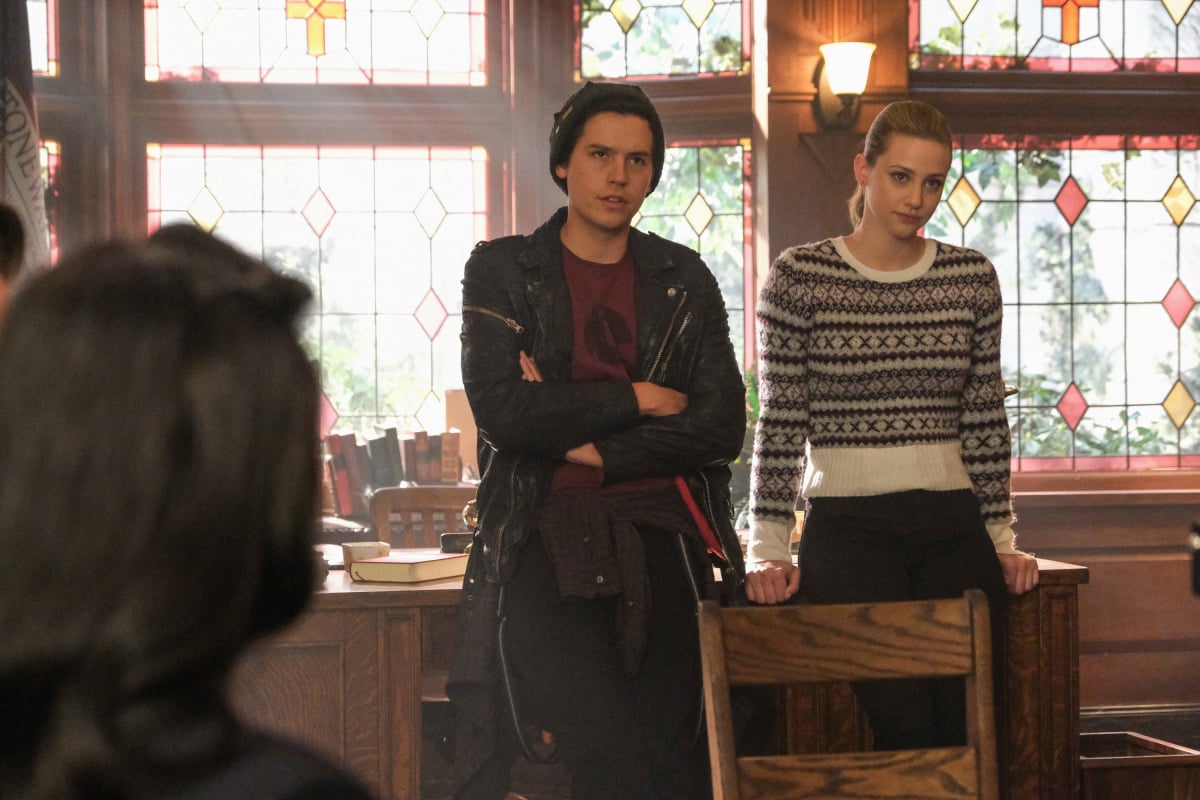 Season four of Riverdale has been a strenuous tug of war between Jughead and his fellow Stonewall Prep students. Ever since our favourite broody teen stepped foot on the campus, he's been battling it out with his privileged classmates, notably Donna Sweett and Bret Weston Wallis. Throughout the early parts of the season, viewers were teased with foreshadowings that suggested Betty kills Jughead while under some sort of influence. But, now that we've caught up with the flash-forwards, we know that Jughead is actually alive, much to the chagrin of the preppies, and he's a man with a plan. So what exactly is going on?

Well, let's start with what happened the night of Stonewall's forest party. Brett and Jughead leave the gathering to have a "chat" deep in the woods. And by that, we mean Brett and his preppy buddies are preparing to kill Jughead by hitting him over the head with a rock and framing Betty. That's why Donna drugs Betty when they have their little verbal spar elsewhere in the woods and Betty wakes up standing in front of Jughead with a rock in her hand.

However, we now know that Joan Berkley, another Stonewall snob, is the one who sneaks up behind Jughead and hits him with the rock while Bret distracts him. Thankfully, Jughead's beanie cushions some of the blow, which saves his life. When Betty, Veronica, and Archie find him barely conscious and bleeding out, they call Charles, who brings a team of medics to treat Jughead. Once he fully regains consciousness, Jughead and the gang put together a scheme to take down the preppies once and for all.

That plan involves faking Jughead's death, sending the Stonewall teens into a tailspin as they fail to effectively blame the supposed murder on Betty. All the while, Jughead is hiding out in a bunker, watching everything unfold via secret live streams. Over the course of two weeks, the Riverdale squad let a few select people in on the plan: Archie's mom, Jughead's dad and sister, and Veronica's sister, Hermosa, who ends up digging into Donna's background.

But before we bring that into the mix, you're probably wondering why they wanted to kill Jughead in the first place. You remember the Baxter Brothers writing competition, right? Everyone in the Quill & Skull guild was vying for the spot as the next ghostwriter. However, in order to write about the perfect murder, they first have to commit the perfect murder. That's initially why Professor Chipping invited Moose to Stonewall. Moose was going to be the victim of whoever the next ghostwriter would be. But when Chipping got cold feet about the whole thing, he urged Moose to leave and then killed himself. When Mr. DuPont took over, he made Jughead the new target (unbeknownst to Jughead, obviously.) 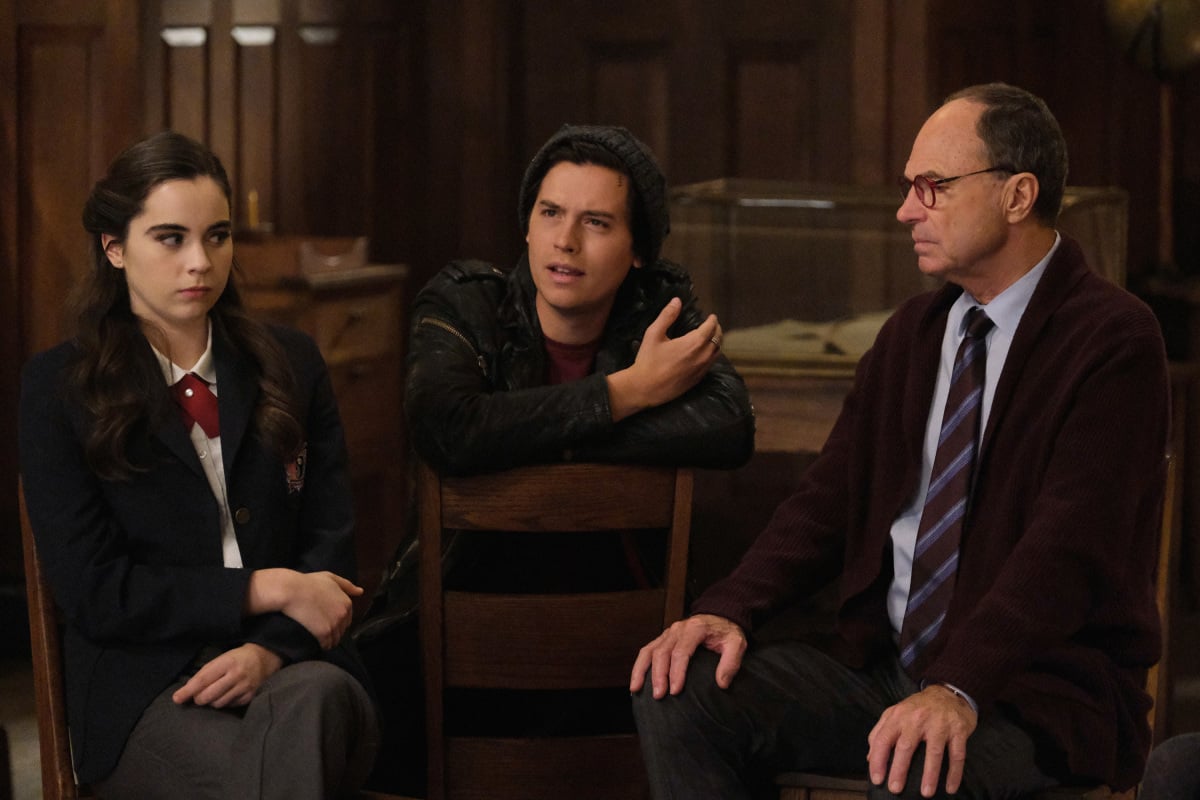 And there's more. DuPont also invites Jughead to Stonewall Prep to lure out Forsythe Pendleton Jones — Jughead's grandfather whose writing was stolen for the first few Baxter Brothers stories. Why did he want to lure out the poor old man? To kill him, of course! DuPont already took out the three other members of the original literary society to keep his secret about taking Forsythe's ideas. Forsythe is the remaining loose end DuPont is looking to tie up.

Now, let's get back to Jughead's fake death. After silently watching the annoying Stoners (that's what I'm calling them now), Betty and Jughead make a somewhat underwhelming entrance into the Quill & Skull meeting, revealing that everything leading up to that moment was a hoax (including Betty and Archie's romance — or, was that totally feigned?). In a Sherlock-esque manner, the couple reveals all of their findings and connect the dots about everything: why Jughead was in danger, why DuPont is a snake, why everyone at Stonewall is crazy, etc. Once DuPont realises the jig is up, he hurls himself out the window and falls to his death. Afterward, the preppies are interrogated by Charles and the FBI, and Quill & Skull disbands.

Related:
A Handy Dictionary of Every Weird Slang Word That’s Popped Up on Riverdale

Later on, we also see how Hermosa's intel on Donna plays a part in all this. We learn that Donna is the granddaughter of Jane Dallas Brown, one of DuPont's murder victims. Furthermore, DuPont stole the Baxter Brothers character Tracy True from Jane, prompting Donna to dedicate herself to getting into Stonewall Prep, becoming the ghostwriter, and seeking revenge. With DuPont now out of the picture, Donna plans to transfer schools, take over the Baxter Brothers club, and rebrand it as the Tracy True society.

Betty uncovers all of this information in what might be the final showdown between her and Donna. She then forces Donna to choose: either walk away from being the new leader of the literary coterie or stay on as the leader but deal with the consequences of her actions when Betty publicises her link to previous Quill & Skull murders and plot to take down DuPont. Donna never says her answer, but Betty has her in checkmate, so we can assume she chose the former — for now.

It seems as though that storyline is wrapped up rather nicely, but you know Riverdale; there's always something else festering beneath the surface. Whatever it is, Jughead and Betty will figure it out.