The final season of Game of Thrones is currently an enigma, wrapped in a shroud of mystery, that's been tossed into the waters of the unknown. Even so, there are several things that we know to expect: a great battle between the living and the Night King's undead army; a battle for the Iron Throne (or whatever is left of it); and most importantly, a reunion between Jon Snow and Arya Stark. Some may argue that the latter isn't as monumental as the first two, but those people are wrong and should know better.

Jon and Arya haven't seen one another since they both left Winterfell in season one, and now we'll finally get to see them reunite. We got a brief teaser of their reunion in a recently released teaser from HBO, but we can't help but wonder, since the two have changed so much, will their relationship be as strong as it once was?

Related:
A New Game of Thrones Teaser Has Us Worried About the "Aftermath" of the Battle of Winterfell

The last time Arya saw Jon, he was just her bastard half-brother who was planning on taking the Black at the Wall. Arya was arguably the closest to Jon — maybe even more so than Robb — though the two only shared a handful of scenes together. Jon was the one who gave her Needle, after all. But it's been ages and things are different now — not necessarily for the better, all things considered.

Since season one, Arya has seen several friends cut down, the execution of her father, witnessed the aftermath of her mother and brother's murder, and trained to become the ruthless assassin she is now. By the time she's made her way back to Winterfell in season seven, she's decimated an entire Northern House (House Frey) and crossed off enough names on her kill list that she might have a death count close to dragon fire trigger-happy Daenerys. From her interactions with her family in season seven, it's obvious that Arya struggles to balance the detachment she curated while learning from the Faceless Men and acting "normal." But she's also genuinely glad to be back in her home and with her siblings, Sansa and Bran. Her reunion with them might possibly be the first time Arya voluntarily moves to show affection (i.e. hugs) with other people.

As for Jon, we all know the insane journey he has been through to get where he is now. From a bastard of a noble house, to a member of the Night's Watch, to the 998th Lord Commander of the Night's Watch, Jon's always just been trying to do the right thing. The right thing ends up with him getting stabbed to death when his brothers mutiny against him, and then resurrected thanks to a Melisandre and her prophecies. When he arises, he is reunited with Sansa (in a surprisingly sweet reunion for two who have never been close) and she convinces him to fight for Winterfell, letting him know that she'll do it with or without him. One Battle of the Bastards later, Jon is King of the North and trying to remind everyone that the Night King cometh. This leads him to Dragonstone and Daenerys, who he starts a relationship with, just in time to bend the knee and convince her to join the fight for the living. 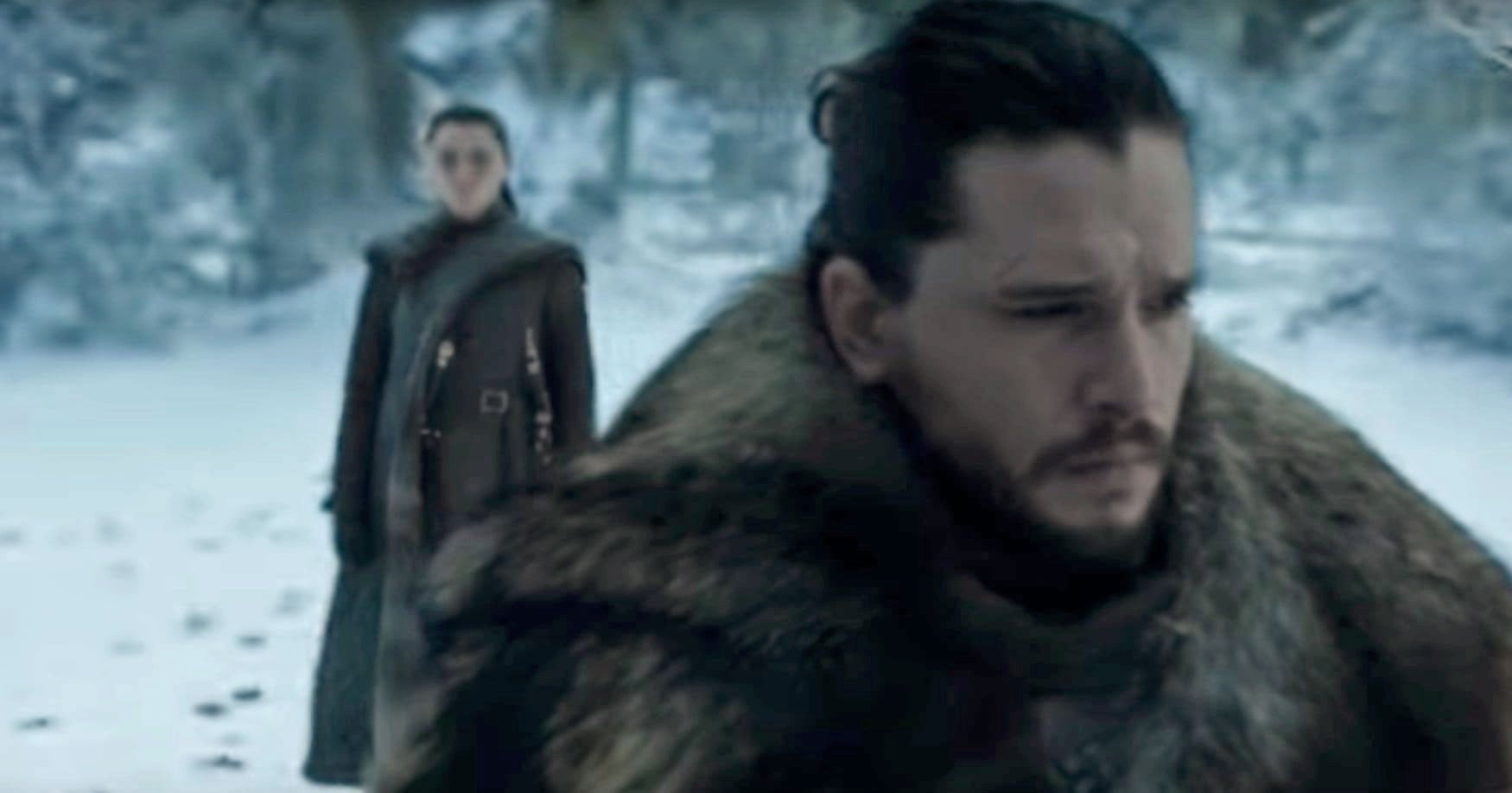 When Arya and Jon finally meet in season eight, they'll reunite as a former No One and the Warden of the North — titles I'm sure neither of them ever dreamt they would carry. Sansa once told her sister that "when [Jon] sees you, his heart will probably stop," and we have a feeling it's not a gross understatement. Will Arya tell him the truth about her training as a Faceless Man? Sansa and Bran know about her work, since it came in handy for a certain execution of a Northern traitor, but will Jon take it as well as they did? And how will Arya feel about the fact that Jon has given up the North's independence to Daenerys?

Related:
ALERT: Game of Thrones Just Released a Ton of New Pictures From the Final Season!

She may not be as politically minded as her older sister, but Arya knows what it's like to have her family under a Southern queen's thumb and she probably won't be a fan — no matter how many dragons come along for the ride. And will they have an epic sparring scene like Arya and Brienne did?!

We can't wait to see how things shake out for this particular reunion, which we know will have to occur early in season eight. First episodes are usually prime real estate for reunions and meetings, so hopefully we'll be seeing these two together sooner rather than later!

British Celebrities
Olly Alexander Says New Years & Years Tracks Are on the Way, Thanks to It’s a Sin
by Navi Ahluwalia 7 hours ago

Netflix
The 14 Best TV Period Dramas Ever — Yes, Including Bridgerton
by Sabienna Bowman 19 hours ago

The Wilds
The Wilds Explores Many Female Relationships, but Toni and Martha's Is Strongest
by Sarah Wasilak 22 hours ago