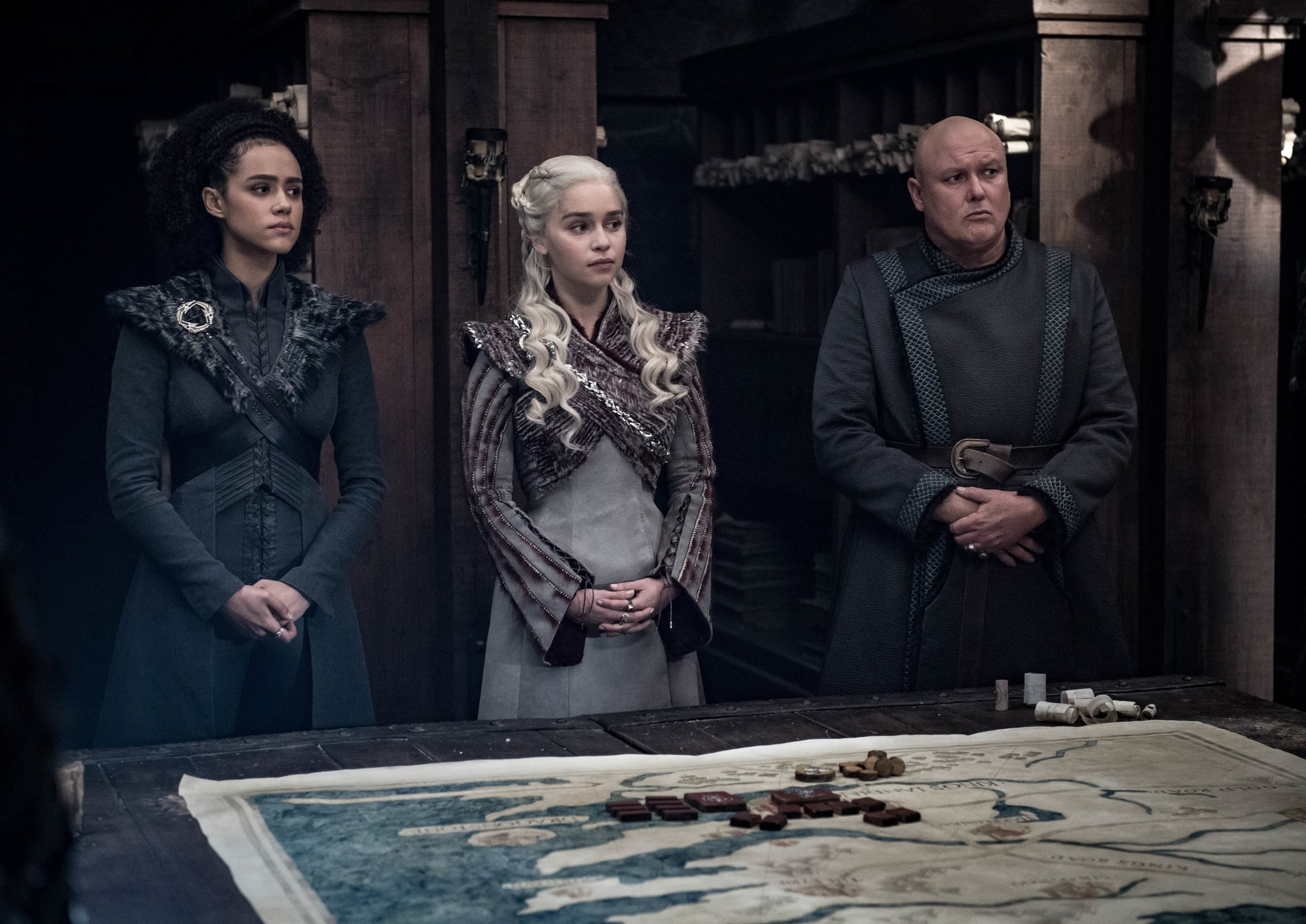 Of all the characters on Game of Thrones, Lord Varys is one of the most interesting ones because he insists that he serves only the realm. His desire to protect the people of Westeros by maneuvering those in power into the best position to do some good in the world (or by manipulating them out of a job) makes him a rare breed in the Seven Kingdoms. He doesn't care which royal toes he steps on, because the Spider is always looking at the bigger picture, which stretches so far beyond the Iron Throne. Unfortunately for Varys, this also means he seems a bit disloyal because he's served a lot of kings (and one queen), and in "The Last of the Starks" he hints that he's ready to ditch Daenerys for Jon Snow. Tyrion isn't so keen on giving up on the Mother of Dragons just yet, and he tells Varys as much by pointing out the number of rulers the Master of Whispers has served over the years. Which begs the question, just how many rulers of Westeros has Lord Varys advised? To date, he's parceled out advice to four kings and one queen, and if he turns on Daenerys and lives to tell the tale, then Jon will bring his total to six.

Related:
Game of Thrones: The Internet Is Rightfully Furious After the Graphic Death of [SPOILER]

Varys begins his job as the Master of Whispers by serving the Mad King Aerys, Daenerys's father. That means he has a ringside seat to the king's descent into madness and subsequent downfall. While we didn't get to see those years firsthand, it's implied that the Spider not only hones his skills as an information-gatherer during the Mad King's reign, he also learns to watch for signs of corruption in the people who sit on the Iron Throne.

After Robert's Rebellion, Varys becomes an adviser to Aerys's successor, Robert Baratheon. At first, the young king seems like he could be a strong ruler, but he quickly proves that he's bored by the politics of it all. Robert is a warrior, he's not a king, and his grief over Lyanna's death and penchant for turning to women and wine makes him an easy target for the manipulations of the Lannister family.

Joffrey takes the throne after his father's death, and it's a disaster right from the start. He's a petty, cruel, and cowardly teen with no interest in taking care of the people of Westeros. Varys knows this and he spends most of Joffrey's reign working with Tyrion to maintain some semblance of peace in King's Landing. Of course, Stannis Baratheon challenges his supposed nephew's right to the throne, which leads to the Battle of Blackwater and more chaos. Thankfully, Lady Olenna poisons Joffrey at his wedding and prevents him from growing into an even madder king than Aerys was.

Related:
Game of Thrones Finally Gave This Couple Their Moment to Shine, and Fans Are LOSING IT

Poor Tommen is far too easily manipulated to be a proper king. Varys doesn't play a huge role in the young man's short reign, but Tommen is the last Baratheon/Lannister that the Spider serves. Cersei's youngest son takes his own life after she destroys the sept and kills his queen. By then, Varys is ready to show his hand and serve the Dragon Queen, who is building her army across the Narrow Sea.

Varys once again lends his advice to a Targaryen when he brings Daenerys and Tyrion together. He sees the Mother of Dragons as a ruler who will put the people of Westeros first. Her reputation as a breaker of chains certainly helps. As far as the Spider is concerned, she's the only person who can bring peace to Westeros. Well, that's what he used to believe. Now that she's back home in the Seven Kingdoms, Varys can't help but notice his queen is temperamental, dangerous, and on edge. She's also convinced that the Iron Throne is her destiny, and Varys tells Tyrion that's a very tyrant-like thing to say. While the Khaleesi's Hand is trying to stay by her side, Varys appears to be plotting to stop her reign before it can begin in favour of the more inoffencive candidate, Jon Snow.

While Tyrion sees Varys's inability to stay on one team as a character flaw, it's actually admirable. He's seen plenty of people rule, and none of them have ruled well. He knows the consequences that come with handing unchecked power over to people who aren't suited to the job, and he simply wants to see Westeros in the hands of someone who cares. His goal is a lofty one, but it's also a selfless desire that could cost him his life even as it saves the realm.