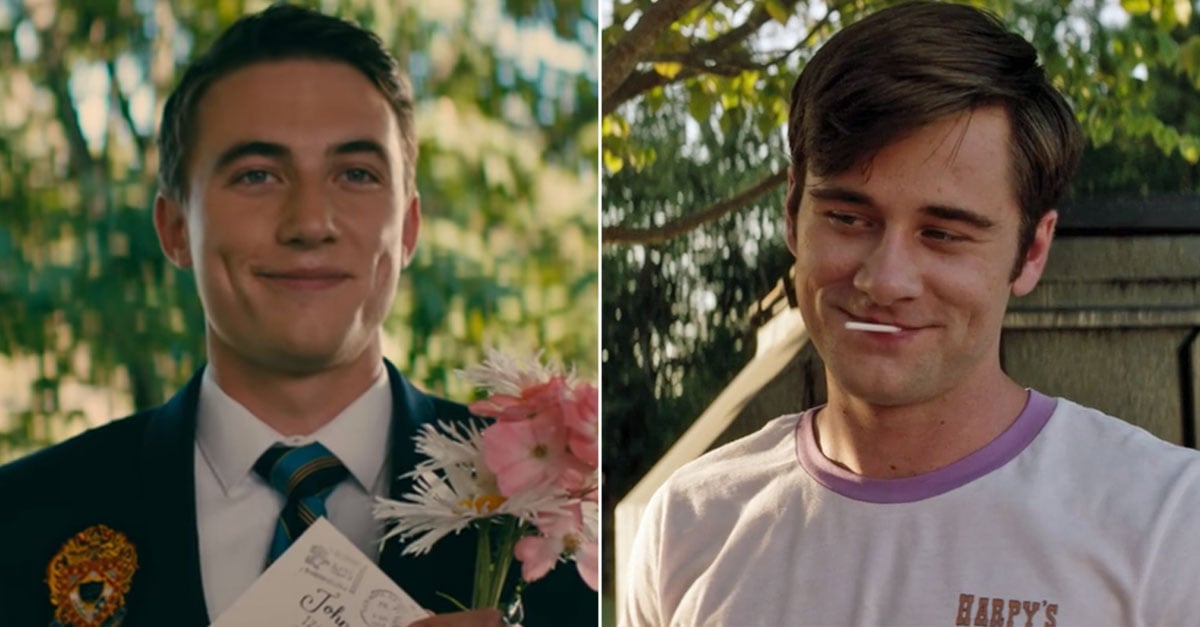 After the credits for To All the Boys I've Loved Before start to roll, the Netflix rom-com slips in an extra scene that hints at what's to come for Lara Jean: the reappearance of one of her childhood crushes, John Ambrose McClaren. Despite assuming that the letter Kitty secretly sent to him got lost in the mail, he shows up on the Covey family's doorstep with a bouquet and Lara Jean's letter (as you can see above, left), seemingly ready to profess his love. Peter Kavinsky (Noah Centineo) better watch out.

Now that we know the upcoming sequel to the film is officially in the works — which is tentatively being called To All the Boys I've Loved Before 2 (the second book in Jenny Han's bestselling series is titled P.S. I Still Love You) — you might be wondering how the new character fits into Lara Jean's life, but also who's going to play him. Well, there's a chance the role might be recast, and go to another one of your Netflix rom-com faves: Dumplin's Luke Benward!

While speaking to Entertainment Tonight, Benward (who plays Bo in Dumplin' and also happens to be BFFs with Centineo IRL) revealed that he's hopeful he gets cast in the role of John. Nothing is even close to official just yet, however, and it's mostly a running gag he has with fans who'd like to see him join the film:

"Honestly, I'm just messing around. There's nothing to it right now. I just like playing with people. People were getting excited about it, I thought might as well instigate a little bit. Yeah, I'm an antagonizer. I have been since I've been a little kid, so sometimes I can't resist . . . I'll be honest, I don't really remember John Ambrose. I'll probably have to watch the movie again but like I said, I'd love to work with my boy. We'll have to see how it shakes down, but I'm not opposed to it."

Related:
Lana Condor Admits She and Noah Centineo "Encouraged" Dating Rumours: "We Genuinely Love Each Other"

If you haven't read the books, then allow us to fill you in just a bit: John Ambrose McClaren is one of the five guys Lara Jean writes her letters to (as well as Peter, Lucas, Josh, and Kenny). Kenny from camp's letter gets returned to the sender, but Lara Jean never hears from John Ambrose, a boy that she knew from Model UN, and assumes his letter got lost in the mail. It's not until P.S. I Still Love You that John Ambrose makes a play for Lara Jean, and ends up being stiff competition for Peter. You see, the first book actually ends with Lara and Peter still broken up, and in the second we discover that she and Peter actually were good friends with John Ambrose back in middle school before he moved.

Other important things to know about John? He's incredibly handsome, well-mannered, polite, and above all, very romantic. As painful as it is to imagine Lara Jean with anyone but Peter K, we have to say that John Ambrose puts up quite a good fight for her heart. So, while actor Jordan Burtchett appears as the newcomer for a split second in the post-credits scene, we can totally see Luke Benward taking on the roll. And just in case you need reminding of why we think so, allow this GIF to explain on our behalf: