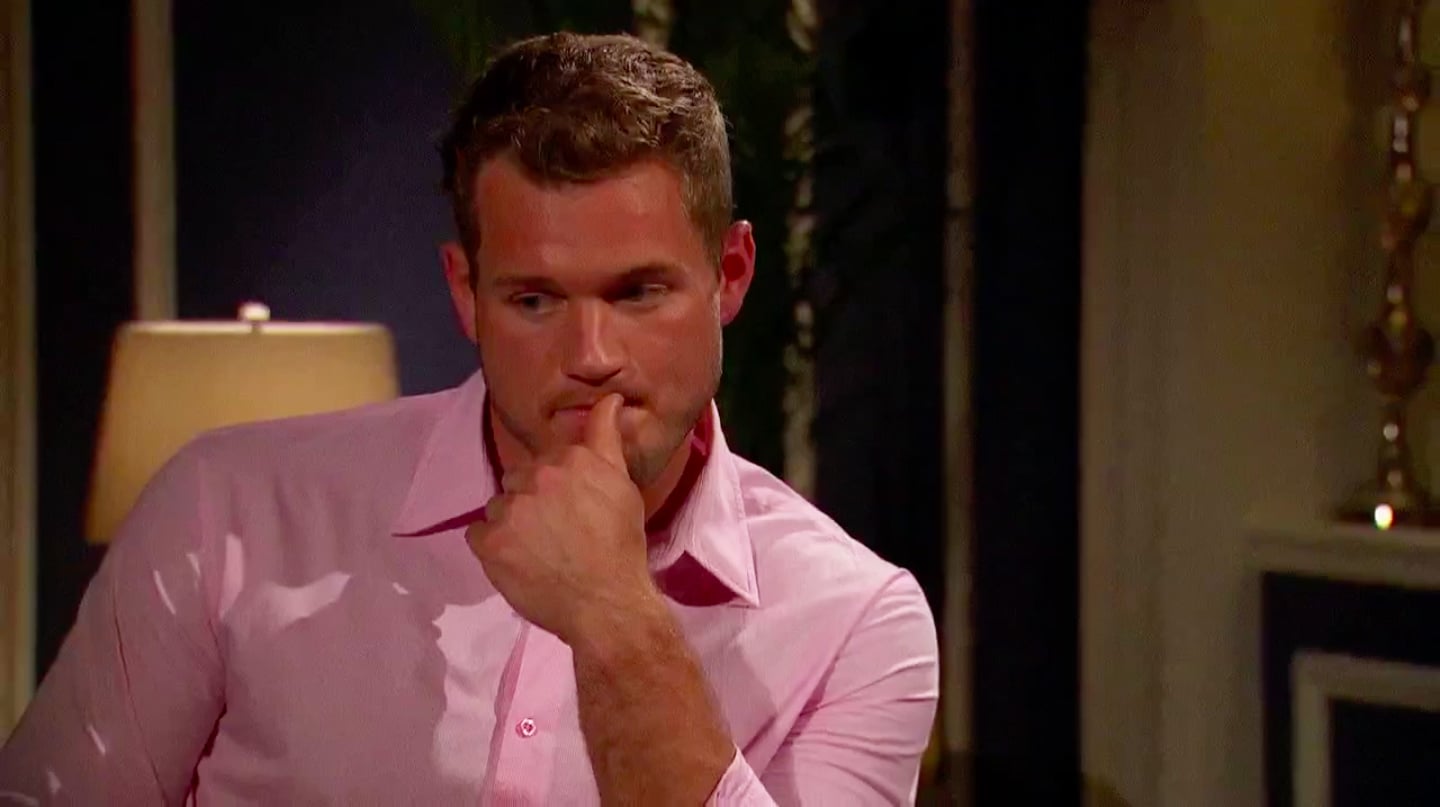 Well, y'all, Colton finally told Becca that he's a virgin. The storyline, erm, personal choice, has come up several times on this season of The Bachelorette as a potential "deal-breaker" for their budding relationship. The virgin contestant has been a tried-and-true formula for years on the show — see Ashley Iaconetti, Becca Tilley, and even Sean Lowe, The Virgin Bachelor — but it was handled particularly poorly this time.

Becca was down to her final six suitors. Armed with three one-on-one dates and a group date, she gave the first one-on-one to charming football star Colton Underwood. ABC's aggressive marketing has been reminding us for weeks that Colton is a virgin, and he was finally about to reveal his status to Becca. After a date in which they dived for conch shells — imagine Colton squirming at talk of the sea creature's qualities as an aphrodisiac and numerous "conch" jokes — they sat down for a fancy dinner and Colton geared up to tell his secret.

"I told you earlier I put my professional life in front of my personal life," he said, sweat forming on his brow. "And I spent a lot of time working on Football Colton, and I sort of forgot who Personal Colton was. And I did only have one serious relationship coming into this. I haven't really had that many girlfriends or dates because of sports. And because of that, I still am a virgin."

Becca looked at him with a completely blank face. "Really?" Was she mad? Sad? Contemplating whether she'd have to wait until they walked down the aisle to finally have sex?

This was hard for Colton. You could see it in his red face and hear it in the way he stammered.

"Thank you for telling me," Becca said after a long pause. "Now I, yeah, I just, I get that that's difficult, and I would never want to pressure you or put you so much out of your comfort zone in a situation where it would worry you . . . can you excuse me for one second?"

Becca got up and walked away. This is a standard move for the franchise lead: they get a bombshell, they walk away to process the news. Colton sat there, sweaty and nervous, as we heard him say in his confessional that he's worried that Becca won't be with him because of his virginity. But instead of hearing from Becca about why she walked away, we just saw her standing there doing what? Thinking? Getting that pensive shot in for the cameras?

Cut to five minutes of commercials.

Upon her return, she just looked at him, as if he owed her even more of an explanation. ABC really milked the moment, as Colton (who happens to have dated a famous Olympian) further revealed, "I'm not waiting for marriage. I'm waiting for the right heart."

Related:
The Bachelorette: Becca Sent [SPOILER] Home, and Now All of Bachelor Nation Is Sobbing

They chat it out and, surprise, Colton gets a rose! So . . . why did Becca walk away? Was she trying to figure out how to tell him that she was also a virgin? Had she had a bad experience with a virgin in the past? Was her best friend brutally murdered by a virgin and therefore she holds a grudge against all virgins?

It's a small moment, but a poignant reminder of just how produced this show has become. There was no reason for her to recoil and walk away. He hadn't told her that he had cheated on a girlfriend or any other number of actual offences that might cause a person to reevaluate the validity of their relationship. She never explained why she left him in his moment of panic and stress — not to him, and not even in a confessional. The only reasonable answer for her excusing herself is because ABC wanted to have that footage. It wanted Colton to sweat, alone at that table, for the previews. It was so uncomfortable that even Jimmy Kimmel poked fun at it on his show later that night.

After Becca was the victim of such heartless editing in The Bachelor, I'm surprised, and frankly disappointed, that the tradition has continued in her supposedly no-bullsh*t, "let's do the damn thing" season. I've stuck with this show despite the constant unnecessary reminders of Becca's heartbreak with Arie and poor casting choices, but I'm growing tired of this manufactured drama.