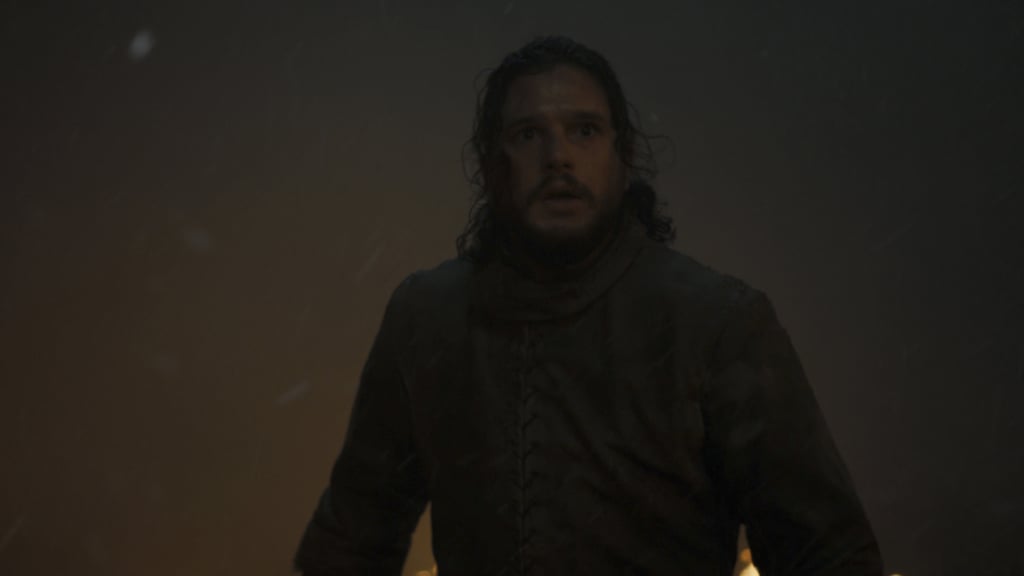 Here's a question for you: what the hell happened during Sunday night's episode of Game of Thrones? I'm only asking because even though I sat through all 82 minutes of "The Long Night," I'm still not totally clear on who died and who lived through the Battle of Winterfell because of how freakin' dark the episode was. . . OK, just kidding — here's an explainer if you need one. But in all seriousness, season eight's third episode is so damn dark, it's nearly impossible make out a lot of what's going on during the chaotic fight against the Night King's army.

Take, for instance, the photo above of Jon Snow (Kit Harington) — that's an official still HBO released in anticipation of the episode. And you can barely tell that's even him! Why, oh why, does the network insist on keeping the show a murky blur of barely discernible movement? Apparently it's all in the name of realism. (Yes, even in a show that prominently features dragons and ice zombies.)

Related:
The Very Best Reactions to That INSANELY Badass Arya Moment on Game of Thrones

"I think we're all very much on the same page where we're trying to be as naturalistic as possible," cinematographer Robert McLachlan told INSIDER back in 2017. "[We wanted] to make these sets and locations feel as if they're absolutely not lit by us, but only by Mother Nature or some candles so that it feels more naturalistic, albeit enhanced in some cases."

While I can certainly understand the series wanting to accurately portray a battle set at night, and there's definitely an argument to be made about the role the near-suffocating darkness plays in helping to disorient the audience as much as the characters they're watching . . . at the end of the day, it's a TV show. We need to be able to see what's going on without turning off every light in our home and then asking every one who lives on our street to do the same. On the bright side (pun totally intended), at least we were able to see every bit of that incredible Arya moment at the end.

Keep reading to see some of Twitter's most hilarious reactions to Game of Thrones' lighting problem, and then check out what might be in store for Westeros in next week's episode.

Netflix
Who Is Jessie Mei Li? Here's What You Need to Know About the Shadow and Bone Star
by Navi Ahluwalia 20 hours ago