One point of constant fascination on Orange Is the New Black is its willingness to dip into backstory. Over the course of the past five seasons, we've learned why nearly every inmate has been incarcerated, from a main character like Piper to someone who doesn't get nearly as much screen time, like the chronically mute Norma. After all this time, though, there's one major inmate whose backstory has remained more or less cloaked in mystery: that of Galina "Red" Reznikov. To be fair, we've seen a lot of Red's background, going all the way back to season one, but we have yet to see the moment of her arrest and the actual crime that ended up putting her away. Let's review everything we've witnessed so far.

We get our first glimpse of Red's origin story back in the second episode of the whole series. Here, we see how Red (aka Galina) owns a Russian market with her husband, Dmitri. In an attempt to get into the good graces of the Russian mob in NYC, Dmitri urges Galina to befriend the wives of the mob bosses. It quickly becomes clear that she doesn't fit in with the more "refined" women, and after just one outing, they exclude her. Galina confronts them and ends up shoving the leader; she accidentally pops her breast implant in the process.

To pay for damages, the Russian mob boss demands $60,000 from Galina and Dmitri. Since they obviously can't afford to pay, Dmitri instead agrees to let the Russian mob use his freezer for storage . . . of dead bodies. 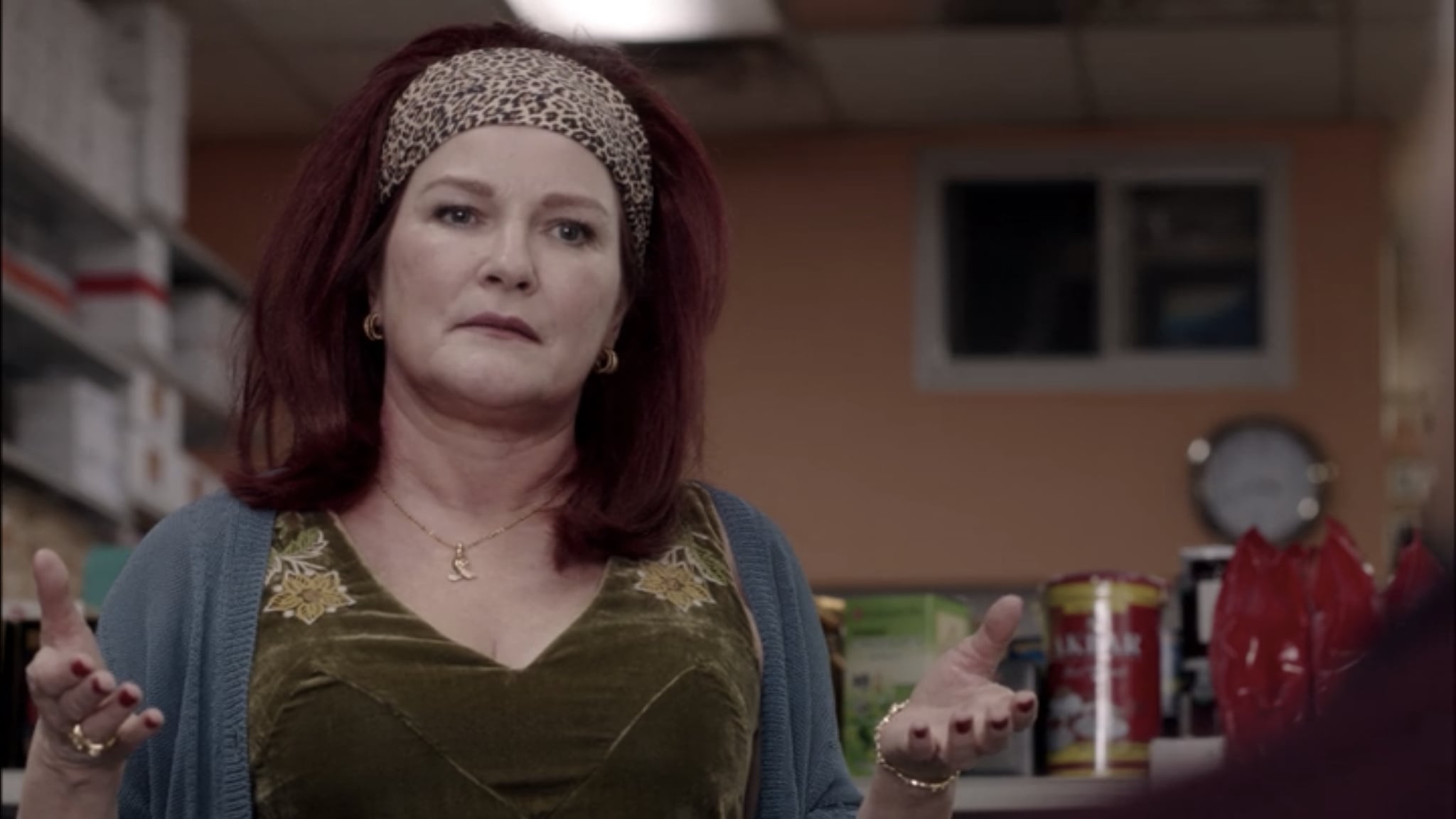 Red's Rise Through the Russian Ranks

In season one, episode eight, we see how Galina sweet talks her way into the Russian mob's inner circle. It's really a rather innocuous issue: the mob boss can't seem to figure out how to make money off of tomatoes. They have too many, they always go bad, and they can't compete with other stores. Galina advises the boss to look for steady purchasers, like schools and hospitals, and it works. Next thing we see, she's in tight with the mob and has somehow switched roles with her husband, who now makes the coffee.

It's not until season four that we get any additional insight on Red's incarceration. We don't even get to see this portion of Red's story in a flashback. Instead, Piscatella reads it from her file while interrogating her about the dead guard at Litchfield. Piscatella cites how, at the time of Red's arrest, she had five bodies in her freezer. For this, we can assume that she got in deep with the Russian mob. It's hard to say how deep, and it's hard to say what exactly she started doing. Maybe she simply continued to help the Russians hide their bodies, or maybe she started to run the show. But that begs the question: how did she not end up in a maximum security prison? Meanwhile, Back in Russia

In season five, we actually don't really get any more insight into Galina's crimes, but perhaps we get a bit of context. We flash back to her much younger days as a factory girl in Russia. She becomes involved in a relatively much more innocent line of illegal work: producing and selling Levi's jeans, which at the time is prohibited in Russia and referred to as "Western decadence." Galina's partner in crime eventually chickens out of the contraband denim business, but we see a fire bloom inside Galina. She's addicted to this insubordination of higher powers. She eventually escapes Russia with Dmitri and goes on to open the Russian store we see in earlier episodes.

This flashback might be the core of Red's character. It explains how she always hungers for the power that comes with pushing back. Not only does her time in Russia explain how she so willingly slides into the Russian mob, but it also informs her prison persona. This is why Red pushes so hard against everyone, why she loves being the "mom" of the prison. This is why Red covers up the murdered guard and seems to relish in the emotional torture of Piscatella. This is why she is the way she is.