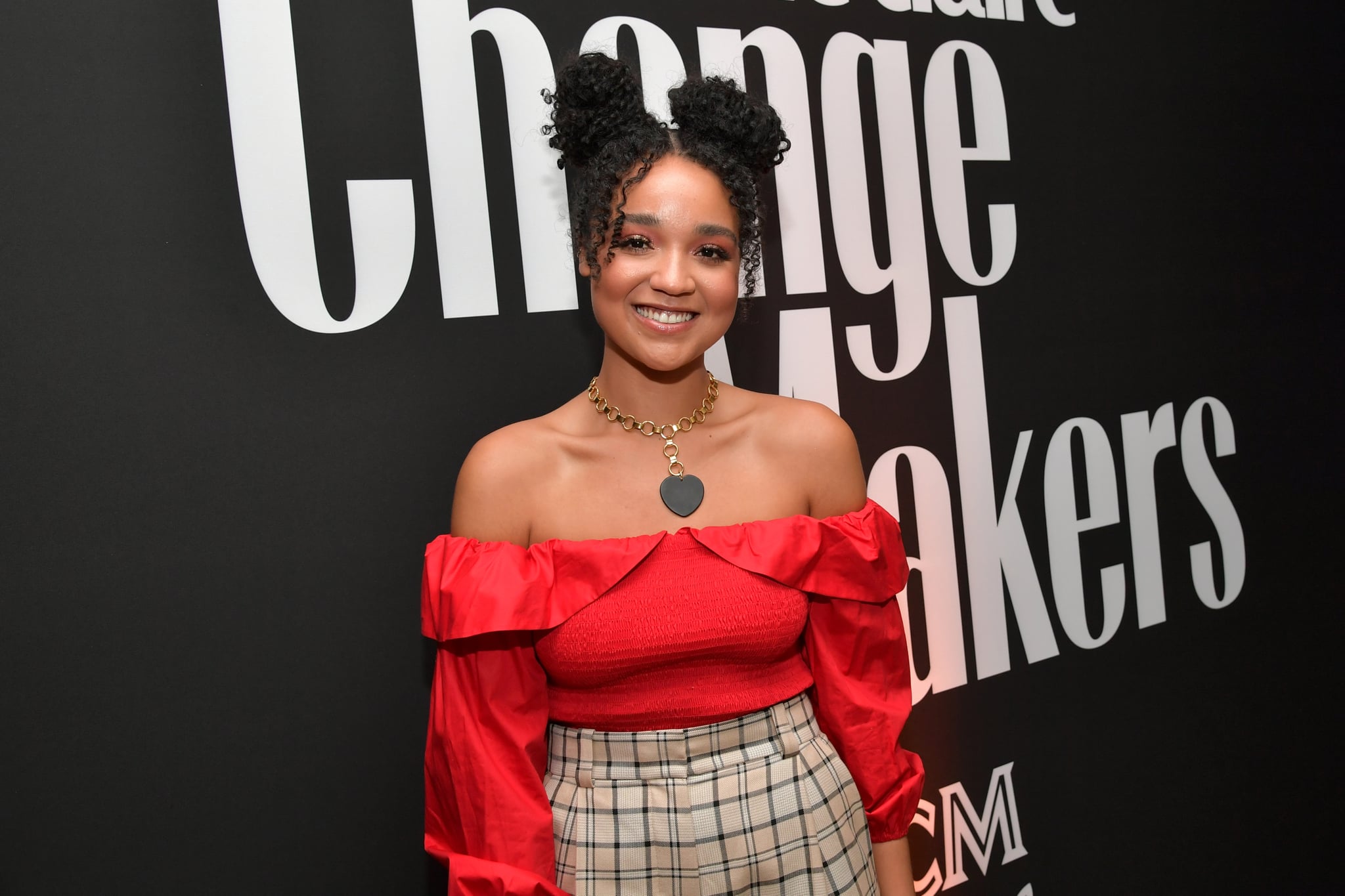 There's a moment in The Bold Type season one when the first Black social media director of Scarlet — the fictional women's magazine — slams her fist into the face of a random bigoted white man and fights back as the police rush in to handcuff her. As a viewer living in the reality where Black people are harmed or killed by police violence with startling regularity, my first thought was not fit to print online. But my second thought was just sheer incredulity, and I wasn't the only one. Aisha Dee, the actress wielding Kat Edison's fist of fury, was as disbelieving as I was.

"At first I was like, 'Well, there's no way this girl looked in the mirror and didn't see a Black girl staring back at her, because that's it.' This doesn't make any sense," the Australian actress recounted to POPSUGAR. "Of course she would run away from the cops. This is crazy, y'all!"

"It's not perfect, but nothing is, and we don't pretend to be."

But at that point in the show, being Black wasn't a major factor in Kat's identity. The very idea of it being so was a point of contention between Kat and one of the only two Black males on the show, Alex (Matt Ward), in season two. We learn that Kat's inability to address race and how it impacts her life stems from her parents, a wealthy Black man and a white woman (Curtiss Cook and Fiona Highet), who taught her to see race as little as possible and disregard labels. It takes a conversation with Alex to spark her coming-to-Jesus moment in season two. But that was almost three years ago, and both Kat and The Bold Type have come a long way since. It's a journey that Dee is proud of, especially as the show glides into its fourth season, which premiered on Jan. 23.

Related:
How I'm Striving to Bring MLK's Dream to Fruition in My Mixed-Race Family

"It's not perfect, but nothing is, and we don't pretend to be," the 26-year-old actress said of the show's progress from budding drama series to its current acclaim. "And I love when people who watch the show contribute and there's a dialogue around how people feel about the show."

The show has garnered a lot of discussion since its premiere in June 2017, from its obsession with "the dot com" to its candid depiction of sexuality and the chaos of life in the media industry. For Kat, her journey into season four has involved dealing with the reality of her racial identity, discovering her attraction to women, and tackling city politics. Few people decide to run for their city's council position on a whim, but Kat gave it a go in season three. She didn't end up winning the election, but she did make a sombre decision about her love life that Dee said she finds pretty cool. 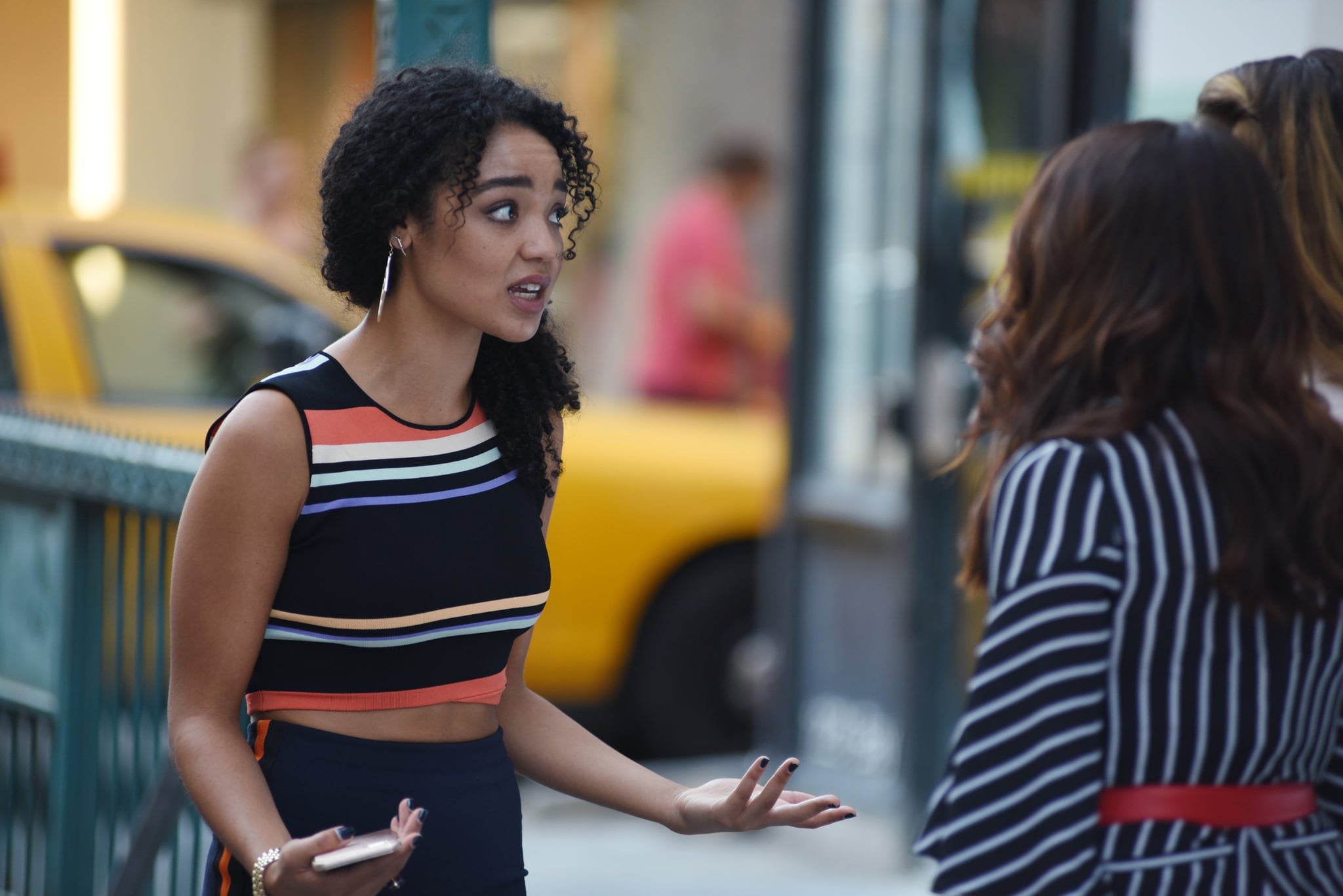 "She's dealing with a lot of loss at the moment," the actress said of Kat's election woes and the end of her relationships with photographer Adena El-Amin (Nikohl Boosheri) and her former campaign manager, Tia Clayton (Alexis Floyd). "It feels like a lot of her safety net has stripped away because she found a lot of refuge being with Adena. She definitely found it being with Tia, and I think the election gave her a purpose. Now, all that is gone. So we're going to get to see her rebuild that and it's great because the trajectory of success is often depicted as being a linear, step-by-step thing. It's cool to see a powerful character like Kat fail upwards."

"It's cool to see a powerful character like Kat fail upwards."

Seeing that Kat is the director of an entire department before she's hit 30, I can say with confidence that failure doesn't belong anywhere in her vocabulary. As the boldest of the show's main trio, Kat has never been afraid to wield her power for her latest worthy cause, from going head to head with Scarlet's executive board to get her preferred intern hired without a college degree to organising a star-studded LGBTQIA prom when she learns that a lesbian bar she frequents is shutting down. But it's obvious she's a woman on a mission going into season four, which Dee explained will involve her utilising Scarlet's platform "in a different way than we've seen her do it before." (Cue a real-life euphoric moment of realisation as Dee remembered the insane events coming up in season four that she'd forgotten about but couldn't share.)

The Bold Type Cast Played Who's Most Likely To, and Confirmed I'd Like to Be Best Friends With Them ASAP

Of course, as most Bold Type viewers understand, one facet of Kat's journey that I find particularly titillating is her relationship with Adena. When I asked Dee how she felt when Kat cut romantic ties with the photographer in season three, she revealed that she actually loved that decision. Sorry, "Kadena" fans!

"I think it's important to see because so often, especially with television that's geared towards the young adults, [shows] perpetuate this narrative that you're not a complete person until you're with your person. And I don't think that's true," Dee explained. "To be with someone you have to have your own roots in the ground. And Kat wasn't there yet. It was clear to me, especially as someone inspired by this fictional character, that I have the blessing of being able to play."

All of which is good and well, but it does make it a tad more complicated considering the two now work together since Adena is Scarlet's new in-house photographer. According to Dee, the new dynamic is interesting for the pure drama of it all, but she believes there's also an element of beauty to this new phase of their relationship. "They've both had time away where they've been able to settle how they feel about each other and how they feel about what went down and just reconnect in a completely new way to wipe the board clean and start over," she said.

It's obvious from the way Dee talks about the former couple that she's a fan of the pairing (she said Adena is Kat's slightly less problematic Mr. Big, which is another discussion altogether), but she's still excited to see Kat explore her dating options in season four. When it comes to relationships, Kat never had a committed connection with someone before Adena and only had dalliances with men. Dee didn't go into details, but she did reveal that Kat will be "kind of" opening up again. She pointed out that trying to date after you've had your heart broken is more frightening than going into things ignorant.

"When you first start dating, you don't know what can go wrong. And then, after you've had your heart ripped into two, you're taking a step to go back out there again. It's so scary," she said. "It's special that fans got to see Kat's first heartbreak and her trying again and failing a little bit, not treating people the way she should have. But this is all out of pure naivete. She's learning, and we're going to get to learn with her."

"I think it's a universal experience of grappling with your racial identity and how you feel about it."

It's especially great to see Kat grapple with her identity on screen because it's rare that we experience this story with a Black woman. Recalling that moment from season one where Kat fought back against a police officer, I asked Dee how she felt about the progress of Kat's exploration of her identity. Though the actress is biracial, she noted that she didn't have the same experiences as her character when it comes to thinking about her racial background.

"I had to search for and really look into who Kat is. She didn't open herself up to women until so late in life, it makes sense that her racial identity would also come up a little later," she told me. "She grew up in a bubble and she grew up with a lot of privilege. So, I'm sure that her parents shielded her from a lot of the things that were going on in the world. It's not something that I've experienced myself, but I think it's a universal experience of grappling with your racial identity and how you feel about it."

She went on to explain that there were times in her own life where she was fetishized for being biracial and she relished the attention because "it was a way for me to feel safe and accepted." But then there would be moments where she would turn herself into another version because "it feels better in this environment." As every Black person knows, code-switching can be the only way to acclimate to your surroundings. 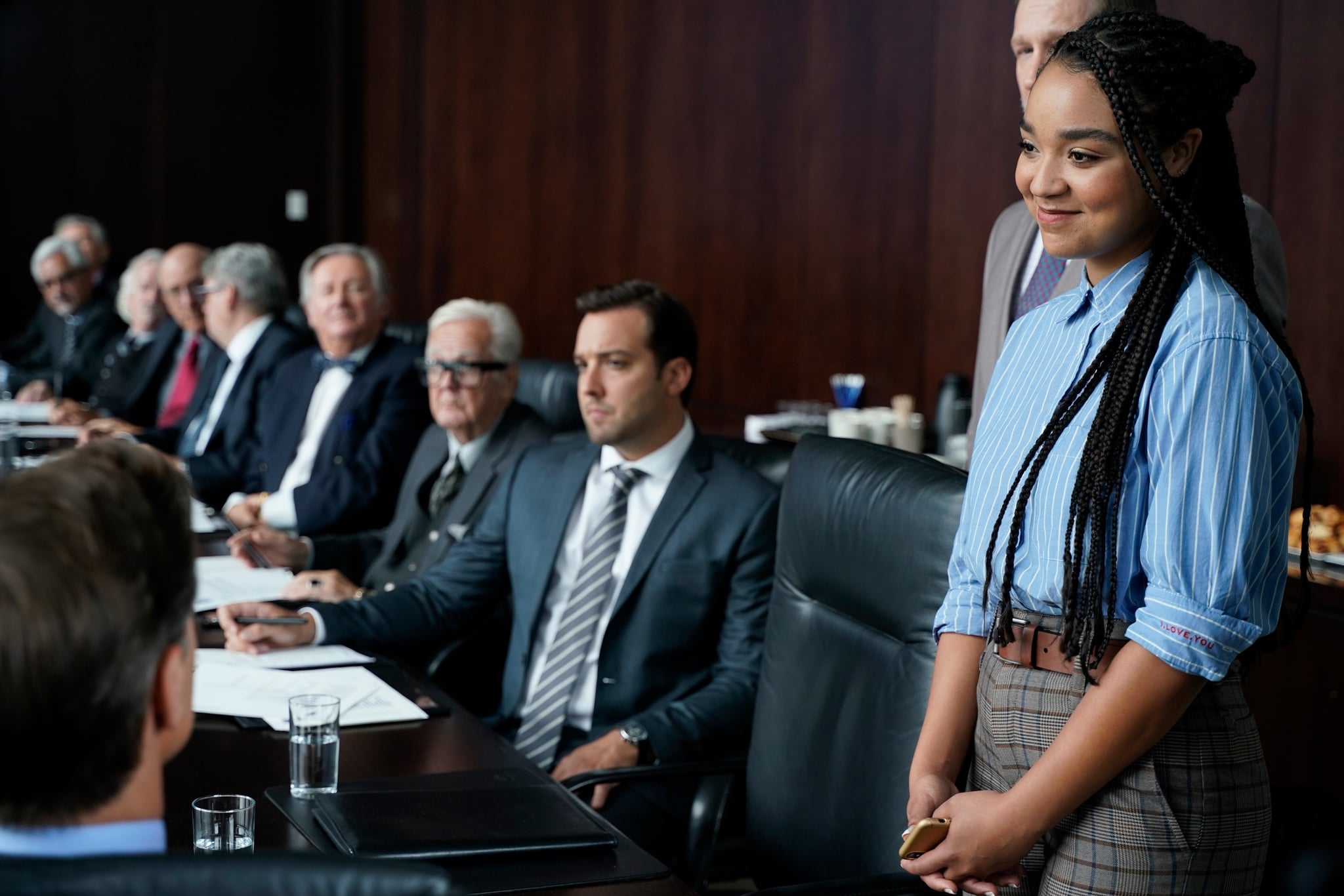 Even though we laughed at the audacity of Kat talking back to a police officer after she's brazenly punched a white man in the face, Dee said it was great that fans were able to see the character deal with that and learn about herself in real time. "I think Kat has to fall in love with herself," the actress said. "And falling in love with yourself can mean loving your body and personality, but it also means falling in love with your racial identity, too, which is hard and not just for Black or white people. So it's important to see this journey where she gets to fall in love with herself again."

And Kat still has a ways to go. While Dee promised that fans will see Kat's parents again this season, she admitted that we won't be diving into any of the social director's mysterious extended family — though she has pitched an idea where fans get to watch Kat navigate both sides of her family. But in the show's fourth season, Kat will be dealing with two breakups, a shakeup at Scarlet, her renewed interest in dating, and her ever-growing desire to fight injustice wherever she finds it. And although she wouldn't budge on any spoilers, one thing Dee could share was her hopes for Kat beyond season four.

"I want Kat to start her own magazine, and I want it to be huge, I want it to eclipse everything. It's going to be a platform for all queer people, people of colour, and all marginalized voices," she revealed with a laugh. "I'm really into the media industry, and after I read Elaine Welteroth's book, I felt like it makes sense that Kat would be the Elaine of it all and create an empire."

Considering how collaborative the cast and crew of The Bold Type seem to be, we could see Dee's dream for Kat the media mogul coming true! Season five, anyone?