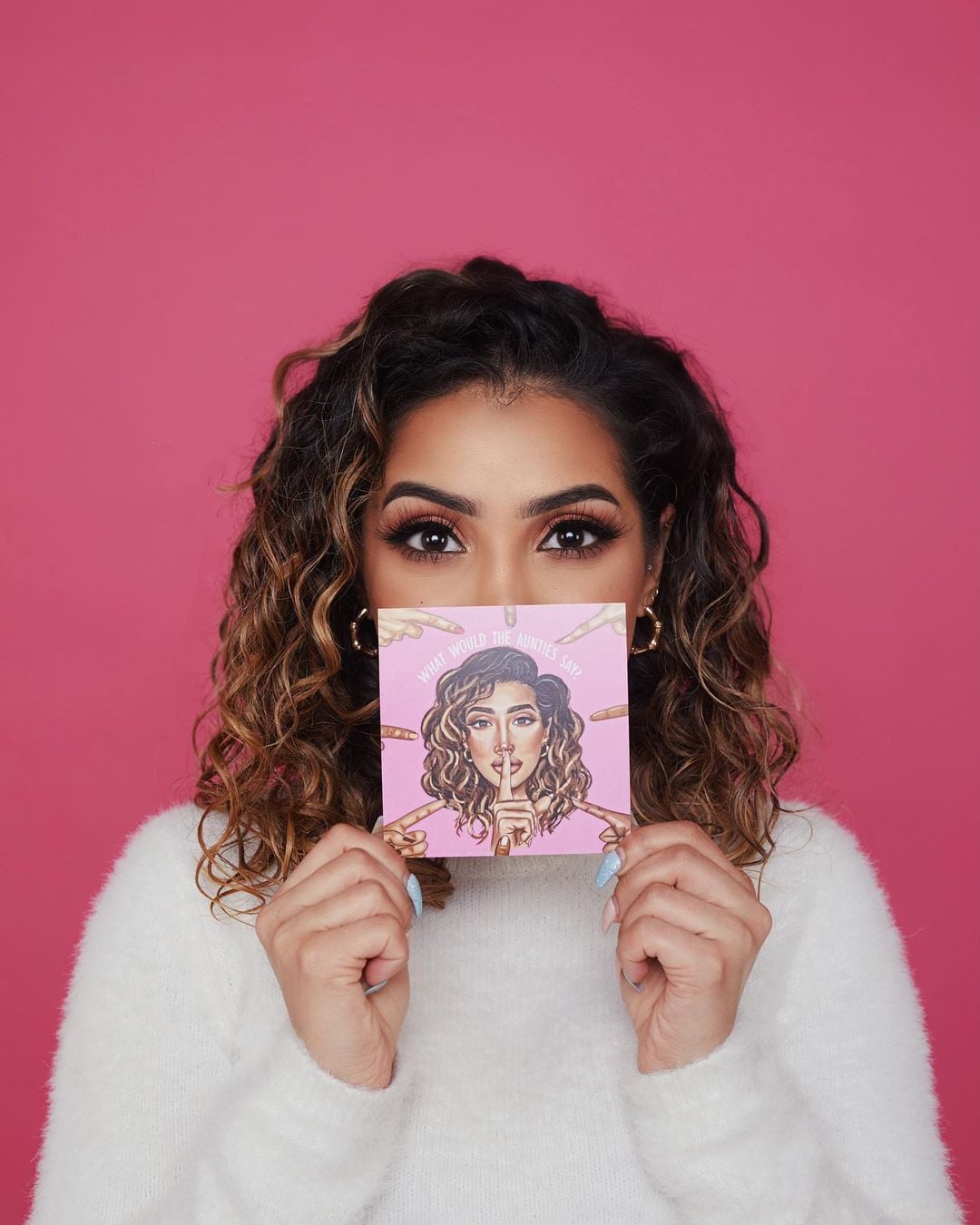 London-born Anchal is one of the few brown girls to have taken a less-traditional path when it comes to her career. Noticing a pretty big gap in the beauty content world, she started creating beauty content targeted at brown-skinned girls on YouTube. Like many of us, this transitioned into Instagram, and the rest is history. We caught up with her to discuss her brand-new podcast, What Would the Aunties Say? The eight-part series delves pretty deeply into a number of topics that aren't frequently discussed in the South Asian community, from mental health and marriage to anti-Blackness and colourism. Read on to see what she had to say.

POPSUGAR: This is such a good idea for a podcast! Tell us a bit about where it came from.

Anchal: For the longest time, I've wanted to talk about more personal things. I come from a makeup background and I love makeup, but I feel like there's just so much more to me. I wanted to speak about certain things that would annoy me or things that I would get into a debate with my dad about at home. Him and his family would think one way, and me being a British Asian young woman thinks completely a different way. And I just thought, I can't be the only one that thinks like this; there must be other brown girls out there that may feel alone and things like that. I started doing Brown Girl Problems videos, and that was me dipping my toe into that area.

It was also a way for me to get my thoughts and opinions across to my dad or anybody else watching — judgemental aunties, family members, or whatever — for them to know that I didn't think the same as them. I wanted to create a space that was real and relatable, not just for myself, but for others. In our culture, we're always thinking about what would other people think, but really the people are the aunties.

PS: Do your aunties know about the podcast? Have they heard it?

A: They know about it. It's really funny because my dad is plugging it to them and I'd go in and be like, "They don't need to listen to this. It's for the youngsters!" I haven't offended anyone just yet. They think it's a good thing because even they've gone through similar things — probably even worse, being from an older generation. They may feel some shame, but that's on them and that's personal, but all in all, I think everybody gets it, because they were once a young brown girl, too.

PS: That makes sense. It's always hard for South Asian women being brought up here in the UK; it was very different for a lot of our parents. What was that like for you? Did you struggle with that concept of a dual identity and not really feeling like you belong in either one?

A: You only really realise that you've got two sides to your culture when you get a bit older or you feel it when you're younger, but you don't actually address it. I always grew up feeling a bit of anger towards Asians, and I still have moments where I'm super judgemental. My dad will be saying something or playing something on TV and I'm like, "Oh my God, I can't believe Indians are still like this." But then at the end of the day, you're like, I am Indian and this is how we are. I feel like I've only really fully gotten to explore it now as I've grown up.

PS: Episode two with Sebinaah touched on it a little, the experience of wearing Indian clothes on nonuniform day and then transitioning to Western clothing and still not feeling quite the same as the other girls. Is that something that you can relate to as well, being an influencer?

A: I was quite lucky that I could still wear my English clothes. [Sebinaah and I], we're two brown girls but still with two very difficult cultures. She comes from a Muslim background, and it is very different, so I'm quite lucky in the sense that I could just wear what I wanted — to a certain degree. You can't really wear short skirts or things like that. I'd roll my skirt up for school, and then I'd pull it down the minute I was coming in the door!

PS: It is so true; even with similar upbringings, things can be so different, right?

A: Yes! I went to visit my dad's side of the family in Detroit two years ago, and I honestly was wearing a full-sleeved top and it wasn't even that low, but I think it just showed the tiniest bit of skin. My grandma and my aunt kept tugging at my clothes. I went out of my way to buy a long-sleeve top because I'd been in LA and I didn't pack anything. And they still weren't happy!

PS: It's crazy, and with things like that, it really feels like they'll never change. With your influencer career and the creative path that you went down, how did that decision go down with your family? Was it something that you always knew you wanted to do?

A: Ever since I was a young child, I have recorded myself on webcams and created my own shows and formed characters. For my 10th birthday, I asked for a karaoke machine so I could record my own shows! If my parents went out and they left us home alone for a bit, by the time they came home, I'd have a full performance ready. Still, when I was starting to do makeup, they were a bit like, where's this come from? How are you going to make money? Is this actually a career? They just didn't know anything about it. They all immediately think "Asian bridal makeup," but I wanted to do photo shoots and movies. I went to uni and did special-effects makeup, and for them, it was still way outside of the comfort zone, but I'm really stubborn and adamant, and I like to get my way so I guess they just got on board with it.

PS: It's a bit of a stereotype, that all Asian parents want you to do these certain careers. Did they ever try to talk you into doing something different?

A: My older sister kind of got it; she wanted to be a play school teacher or work with kids. And my dad was like, "No, you're not going to make any money," and then she ended up doing a degree in journalism. I actually got kicked out of sixth form so I had no plan, and everybody sort of forced me into nursing. Your family will always pick a straight and narrow job that has a future, one that's never going away. I literally just had an epiphany one day that I wanted to do makeup, all in the middle of my sister's wedding!

PS: She must've loved that! You have an episode with Dr Ranjot, all about mental health. Why do you think that South Asians often refuse to seek that kind of help?

A: I think it comes down to like that feeling of shame. You're almost labeled as crazy, and I think everybody is just afraid to look bad, and that's really what it comes down to. It's one of the most brave things that you can do, and if you can openly talk to someone and say, "I go to therapy," I think that is way more brave than anything. You should own it, and it's nothing to be ashamed of. It really just comes down to that feeling of shame and the idea of being judged.

PS: What's your experience with it been like so far? And is it something that you were able to talk to your family about?

A: I'm quite lucky because my eldest sister, she had therapy, and I think if she hadn't, then I probably wouldn't have gone down that route. I needed to see how amazing it was or how it helped her, and it really did. I'm lucky I've had some guidance from someone that didn't make me feel bad about it. But if I'm honest, I don't know how I would feel about speaking to my dad's family about it, and even bringing it up to my dad has been difficult because he immediately thinks "what's wrong with you?" even though nothing is wrong with me. It's just such a good outlet and a way to deal with things outside of your own circle with no judgement. It's been positive.

PS: That's another thing, accepting the fact that there actually might be things that are wrong with us, but this is how we're dealing with it. It's OK to have things wrong with you and be able to fix them.

A: Exactly. My sister recently went through postnatal depression, and she was so scared to tell people. We were just like, "No, just actually own it. Tell people that this is what you're going through, and you'll feel so much better."

PS: Exactly. Easier said than done though! With podcast as a whole, what's one thing that you hope people will take from it?

A: I just want anyone that's listening to it to be like, "Me too." I want them to listen and be like, "Oh my God, I feel that," or, "I know someone that's gone through that." I want it to be a space for real stories, and I want it to be really, really relatable. I'm not sugarcoating anything.

PS: Do you have any advice for fellow brown girls that are maybe struggling with their identity or have chosen less-traditional career paths?

A: Own who you are. Don't be ashamed. It's so easy to listen to the people around us, but they can be quite ignorant to what you're doing. They have no clue, and they're going to say, "Oh, no, that's not going to work," or they're going to bring negativity or judgement. Take your time, figuring out whatever you want to do. It's your life, it's your path.

PS: Finally, who's been your inspiration throughout this journey? Any role models?

A: Is it bad if I don't have a role model? I don't know if there's anybody speaking about things in this way! There's a lot of brown girl Instagram pages out there at the moment that I have a lot of respect for. Things like South Asian Therapists, Brown Girl Therapy, and there's another one about gender inequality. Those are the kinds of pages that inspire me. We're all singing from the same hymnbook, which is great.

Anchal's podcast, What Would the Aunties Say?, is out on Spotify now.