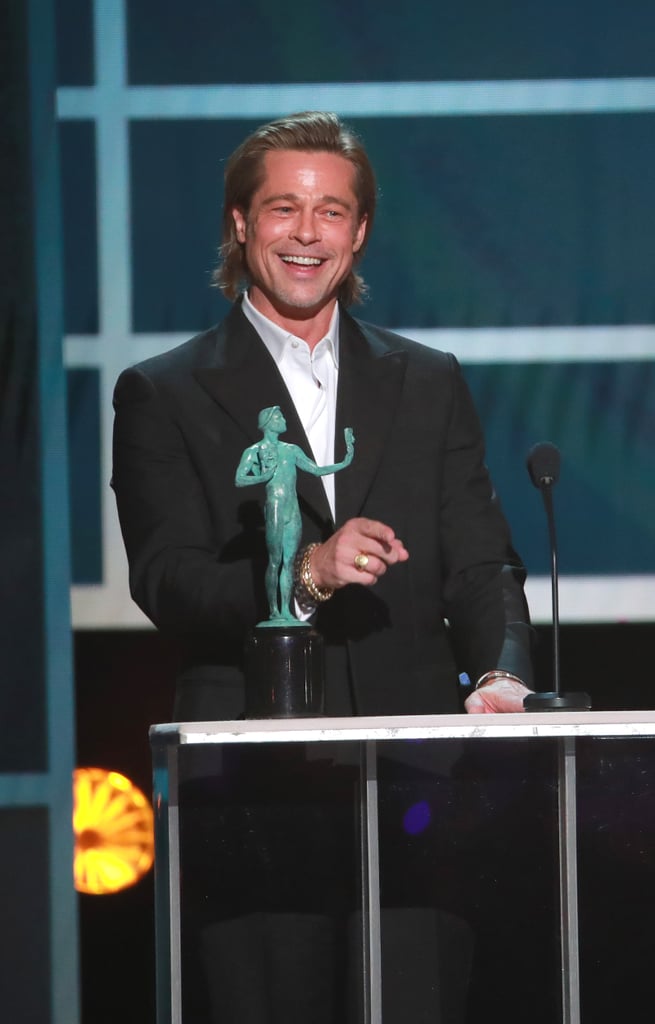 Not only did Brad Pitt win his second-ever SAG Award on Sunday night, but he also showed off some serious comedic chops. The 56-year-old actor won the trophy for best supporting actor for his role as Cliff Booth in Once Upon a Time in Hollywood, but this time he didn't reference his close friend and costar Leonardo DiCaprio in his acceptance speech. Instead, in between thanking his fellow actors for the win, the actor took the time to joke about how he would be adding the win to his Tinder profile and thanking the feet of Margot Robbie, Dakota Johnson, and Margaret Qualley.

"Seriously, Quentin (Tarantino) has separated more women from their shoes than the TSA," he joked, to the laughter of the entire award show audience. Pitt went on to note that the role was a particularly a difficult one because playing, "a guy who gets high, takes his shirt off, and doesn't get along with his wife . . . it was a big stretch. Big." Cue some seriously well-timed camera cuts to the audience, especially the one to Pitt's first ex-wife, Jennifer Aniston. (She seemed pretty charmed, though!) Watch the rest of Pitt's absurdly funny speech ahead.

Related:
Here Are All the Winners of the 2020 SAG Awards!
Previous Next Start Slideshow
Award SeasonCelebrity QuotesSAG AwardsBrad Pitt
Around The Web