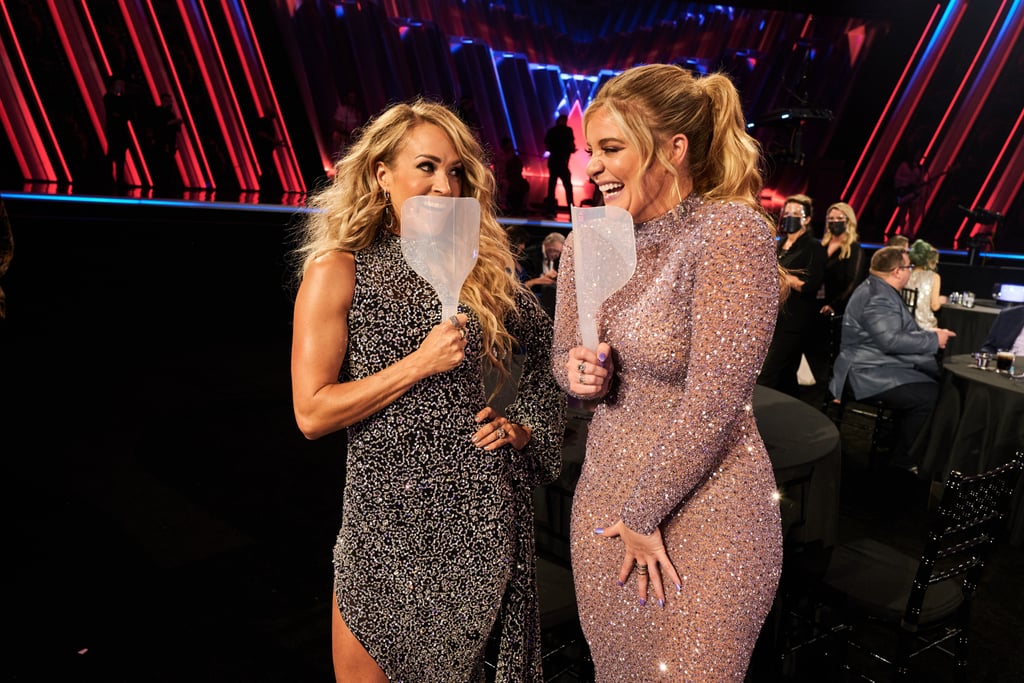 With No Masks or Distancing in Sight, the CMAs' Lack of Safety Measures Was Disappointing

Award shows in the age of the COVID-19 pandemic have certainly faced challenges, yet in the past few months, mostly virtual events like the BET Awards, the Emmys, and the VMAs have proven that the show must and can go on, with the right protocols and adjustments in place. But despite an award season full of safe models to follow, Wednesday night's CMA Awards and its attendees displayed a disappointing lack of concern for the pandemic.

Just two weeks before one of country music's biggest nights of the year, the Country Music Association announced the CMAs would take place inperson (with a few pre-recorded segments weaved in) and indoors at the Music City Centre in Nashville. Prior to the awards, a longtime producer of the show, Robert Deaton, maintained that attendees would be distanced at eight feet apart and seated with just one artist and guest per table. And in a statement to Rolling Stone just two days before the show, the Country Music Association said it had been "extremely diligent" with its testing process. "Every single person has been tested, and many will be tested repeatedly throughout the week. This is in addition to wearing PPE and of course practicing social and physical distancing," the statement read.

Yet in photos from the big night on Nov. 11, attendees are shown celebrating certainly less than eight (or six, for that matter) feet apart in the audience, with no masks in sight. Instead, a few stars held strange face shields meant to cover their mouths, which according to the FDA, do not classify as PPE. Could they not have sacrificed a little lipstick smudge and worn a proper face mask instead? And to make matters worse, celebrities like Carrie Underwood and Miranda Lambert proudly posed with their face shields not covering their mouths or noses, and in other shots were seen with no equipment whatsoever, defeating the purpose of even attempting to protect themselves and others.

The complete absence of precautions is disrespectful to the many frontline workers putting their lives on the line and sets an upsetting example for viewers at home.

Considering coronavirus-related hospitalizations just hit an all-time high in the US and Tennessee specifically reported the highest daily increase of COVID-19 deaths to date on Wednesday, the lack of safety measures and concern for the virus is tone-deaf at best. Whether the CMA Awards' attendees ignored strict recommendations or the Country Music Association provided lax guidelines to begin with, the complete absence of precautions is disrespectful to the many frontline workers putting their lives on the line and sets an upsetting example for viewers at home.

In addition, multiple performers or those in their close circles — including Lady A, Rascal Flatts, Florida Georgia Line, and Lee Brice — tested positive for coronavirus prior to the show and subsequently cancelled their acts last minute, but that did not prompt the CMAs to implement stricter protocols or delay the event altogether. In fact, after Lee and Florida Georgia Line's Tyler Hubbard announced their positive tests earlier this week, the Country Music Association said in a statement that while the news was "incredibly disappointing," it reassured them that their protocols were working. They continued, "Our process enabled us to manage each situation immediately and before either artist ever entered our set. Most importantly, it prevented anyone else from being exposed."

When doubts were raised after Wednesday's CMAs, the association again assured to TVLine that "extra measures of caution" were taken, including the use of PPE, social and physical distancing, and tables spaced eight feet apart with no more than four attendees at any table. "In addition, guests were not allowed to mill about during commercial breaks, and apart from when they were sitting at their assigned tables, audience members were required to wear masks in the venue," they continued. The photos, however, prove otherwise.

In future award shows during the pandemic — the CMAs certainly won't be the last — celebrities and event hosts alike must be more responsible in not only taking protective measures against COVID-19, but also showing sensitivity towards the lives affected by the virus and pandemic worldwide. Ahead, get a closer look at the behind-the-scenes of the CMA Awards.

Previous Next Start Slideshow
Award SeasonCoronavirusCMA Awards
Around The Web